Home » Beauty » For women, ‘the state of your hair reflects what’s happening in your body’

My hair loss began, as most things begin, without me really noticing. That was, until clumps started appearing on my brush, or, in my hands as I washed my hair. It was November. Two months after I’d finished a stressful job, (which, admittedly is a type of tautology, for what job isn’t stressful?) But I’d had a family member come back with an unexpected diagnosis from the doctor around that same time, and the adrenaline that I’d had coursing through my bloodstream every day – and night, because I silly enough to work too many nights – appeared to double.

And then there were my kids, both under five. And then of course, the thyroid. Hashimotos to be exact. The one where your metabolism slows, and you feel tired all the time, in spite of medication. Which meant my hair was brittle anyway, and prone to falling out. But not like this. 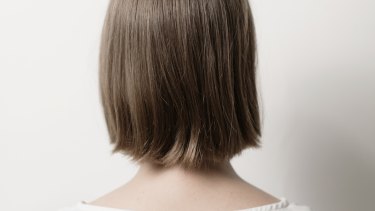 “When your body is already under enormous pressure to maintain basic functions, it stops worrying about the hair.”Credit:Stocksy

I was so embarrassed in front of my hairdresser, watching it fall to the floor as she brushed it, I felt I had to say something. “My hair’s been falling out for the last few months … I guess it’s my thyroid? Or maybe I’m just going through an early menopause?!”

“Oh, don’t worry about it – happens all the time” she told me. It does? “Yeah, lots of women go through stress and a few months later, all their hair falls out. Don’t worry, love – it only lasts for six months or so.”

Turns out she was right. I had my hair cut in April. A big chop, unflatteringly short, but finally, somehow, better. And, as I washed it, I realised, large clumps weren’t coming out anymore.

What had happened? Was it the hair mask I was using? It was certainly making my hair feel healthier. I’d found it on the internet – Olaplex Hair Perfector No. 3 – it was unanimously hailed as a miracle by every beauty tester out there. But at $30 for a small bottle, and half an hour just for soaking, I couldn’t maintain the lifestyle. Maybe it was the celery juice? Going gluten free? Or had my body just sort of … gotten on with it?

“For a woman, the state of your hair is always a reflection of what’s happening in your body. When your body is already under enormous pressure to maintain basic functions, it stops worrying about the hair, so it lets it fall. Hair loss is not to be taken lightly.” These words, coming out of the mouth of Anthony Pearce, a medically-trained Trichologist, specialising in women’s scalp and hormonal issues, felt strangely validating.

He tells me what I had was likely “telogen effluvium”, which, he says, “is just a very fancy way of saying excessive hair loss in a falling phase.”

“Your Hashimotos is probably causing your hair to thin anyway, because your white blood cells are constantly attacking your thyroid, and your hair follicles are so sensitive. But then you add something stressful to those changes, and the first reaction of your body is that your hair will fall out” says Pearce, who then kindly recommends I load up on zinc, Vitamin D and iron, and get another blood test.

“There’s many different types of hair loss, but that time frame you describe – one to three months after – where it has abruptly started coming out, is consistent with a stressful period, and it means you probably lost up to 60 per cent of your hair density.”

But why did it just stop falling out? Was it the haircut? “The haircut probably made it feel less raggedly, but more likely is that your body just resolved it itself” Pearce told me, adding that the mask, while making my hair feel better, was “purely cosmetic” and had no effect on the cause of hair loss.

I was better off trying to minimise stress, get more sleep, inhale, exhale et cetera, et cetera. All the stress reducing things women should do, but can’t because life gets in the way. So I settled for the purely cosmetic and asked hair stylist Kevin Murphy for advice on how to go about it.

“I often work with models who take Biotin supplements, which is known to strengthen weak hair and improve texture” Murphy tells me, but adds, “I also believe in looking after the hair holistically, so start with brushing the scalp vigorously to help stimulate healthy hair growth by bringing blood to the surface and awakening the follicle.”

Murphy then recommends his “Plumping” range, which, he says “uses eyelash technology for thickening up the ends and expanding the hair shaft”.

Murphy sends some of the product out for me to try. It smells divine, and my hair, after one wash, does feel a little fuller. But it’s really not on par with that miracle mask, which means only one thing: that $30 mask, and the half an hour it takes to soak, just became my most valuable stress reducer.