EXCLUSIVE: Adele shows off never-before-seen back tattoo of a bird as she leaves dinner with boyfriend Rich Paul… but singer already appears to be in the process of removing majestic ink

Adele unveiled a never-before-seen back tattoo as she grabbed dinner with her boyfriend Rich Paul on Monday.

A majestic bird inking could be seen on the 34-year-old’s back as she ducked out of Wally’s in Beverly Hills wearing low-cut black top.

However, the ink already appeared to be in the process of being removed as it looked slightly faded and several shades lighter than tattoos ordinarily appear. 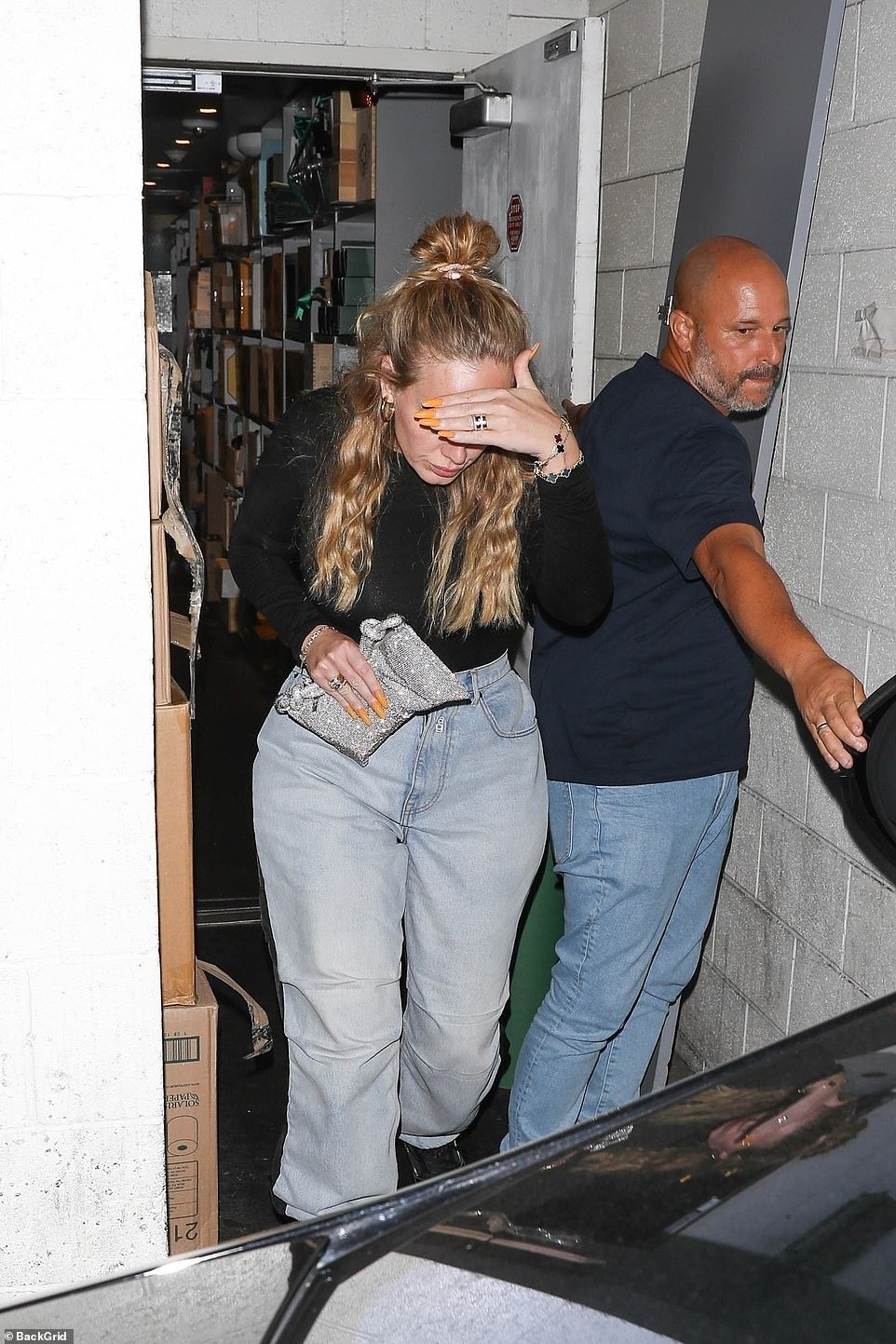 Tatt’s new! Adele unveiled a never-before-seen back tattoo as she grabbed dinner with her boyfriend Rich Paul on Monday 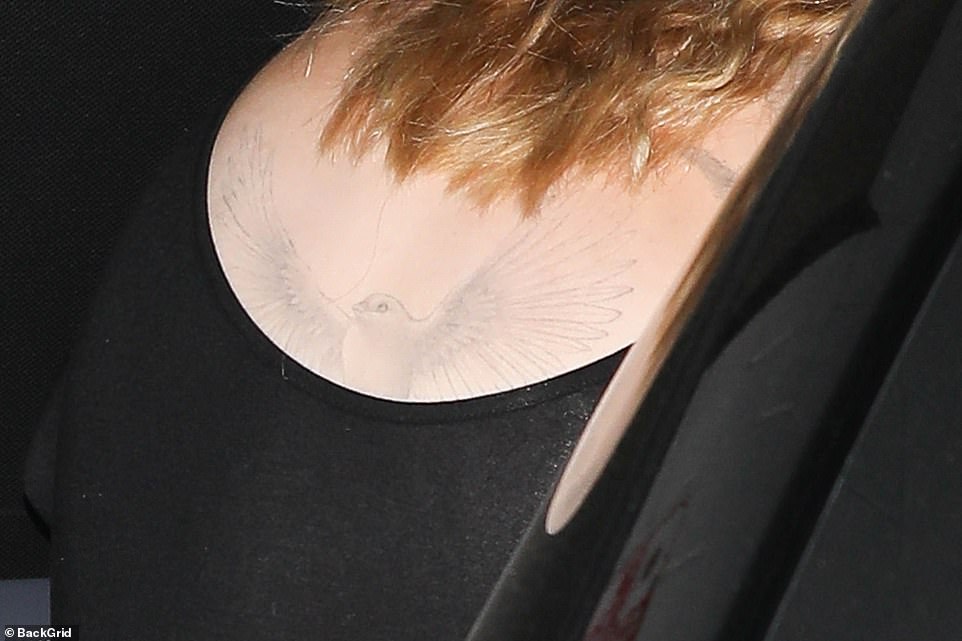 Ruffling some feathers! There was no missing the slightly faded bird tattoo spanning her back

Adele left the restaurant with her wavy blonde hair partially slicked up into a no-fuss bun.

She carried a glittering silver clutch and wore a pair of black and blue jeans tucked over her long sleeve shirt.

The singing sensation decked out her look with an array of charm bracelets, gold hoop earrings, several rings, and a trendy tangerine orange manicure.

Making their way: Adele looked stylish as she ducked out of the eatery and her boyfriend was looking fashionable too 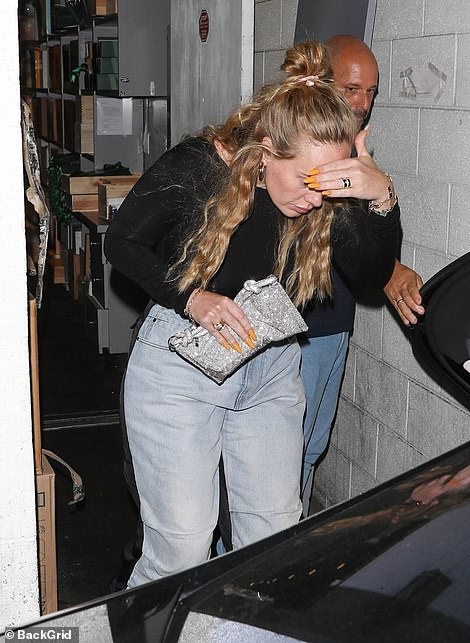 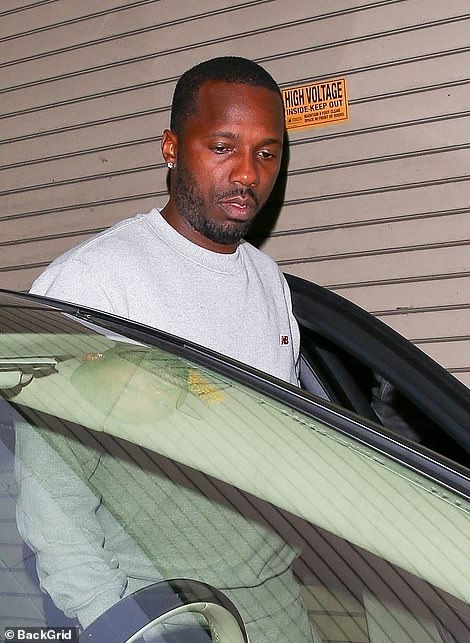 Off they go: The Someone Like You singer made a quick exit from the eatery as her beau got behind the driver’s seat

He cracked a smile as he got behind the wheel of his car while his lady love pulled on her seat belt.

Adele has a number of tattoos but this is the first time fans have caught a glimpse of her massive bird inking.

She already has a large bird tattoo which encompasses much of her right shoulder blade.

Though it was not as visible as her latest inking, in contrast it appeared several shades darker than her new bird tatt. 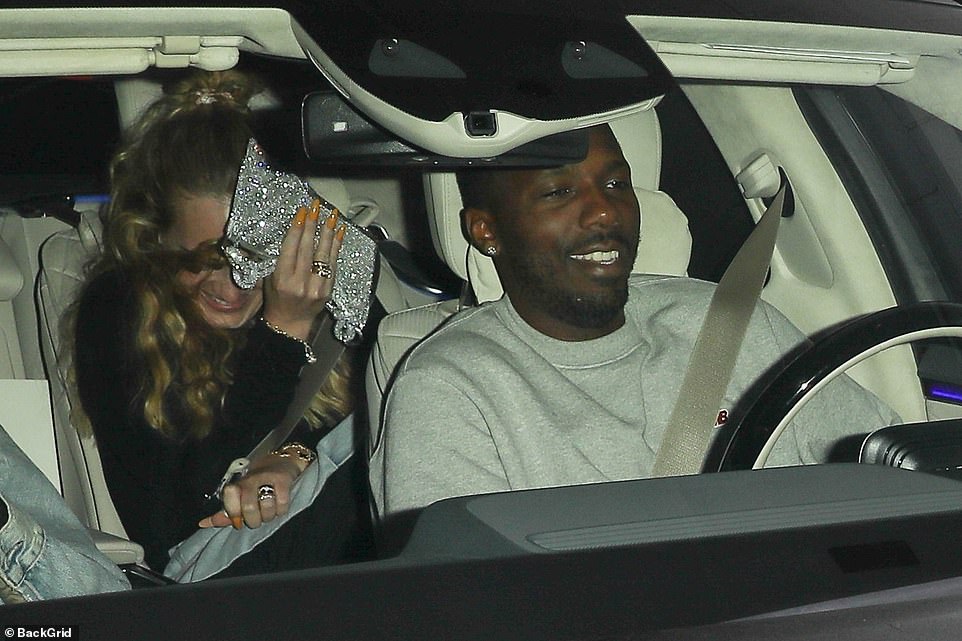 Let’s get this show on the road! He cracked a smile as he got behind the wheel of his car while his lady love pulled on her seat belt 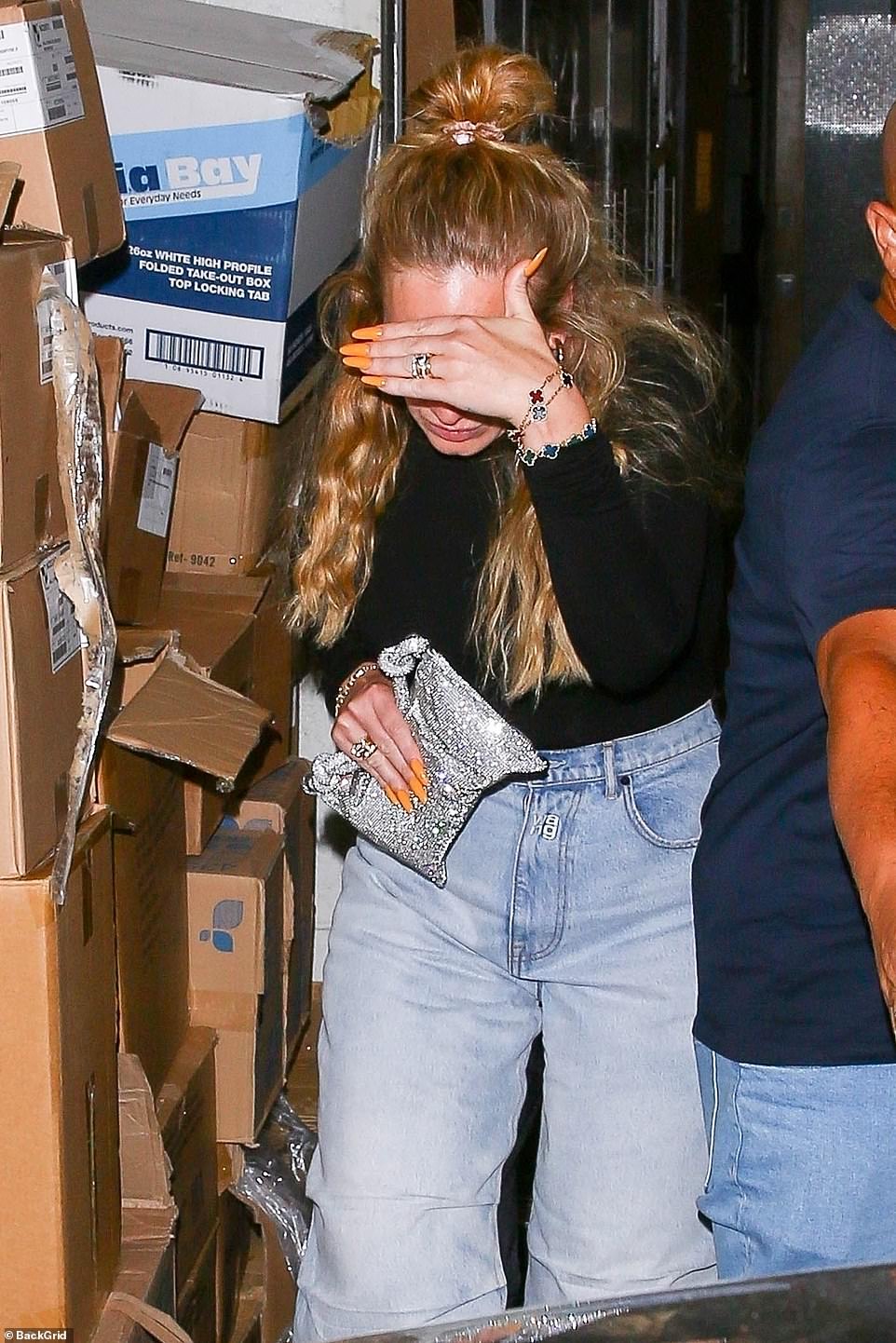 Nailed it! Adele was rocking a trendy elongated manicure in a bright shade of tangerine orange

The outing comes after Adele nabbed her first Emmy win for her TV concert, One Night Only.

As Adele celebrated the victory by posting a slew of snaps with her new trophy online, however, she also sparked speculation she had wed Rich.

In a snap of the gong sitting on her coffee table, a personalised game with the label ‘The Paul’s’ could be seen, prompting a flurry of comments from excited fans guessing the secretive star has married her partner of a year. 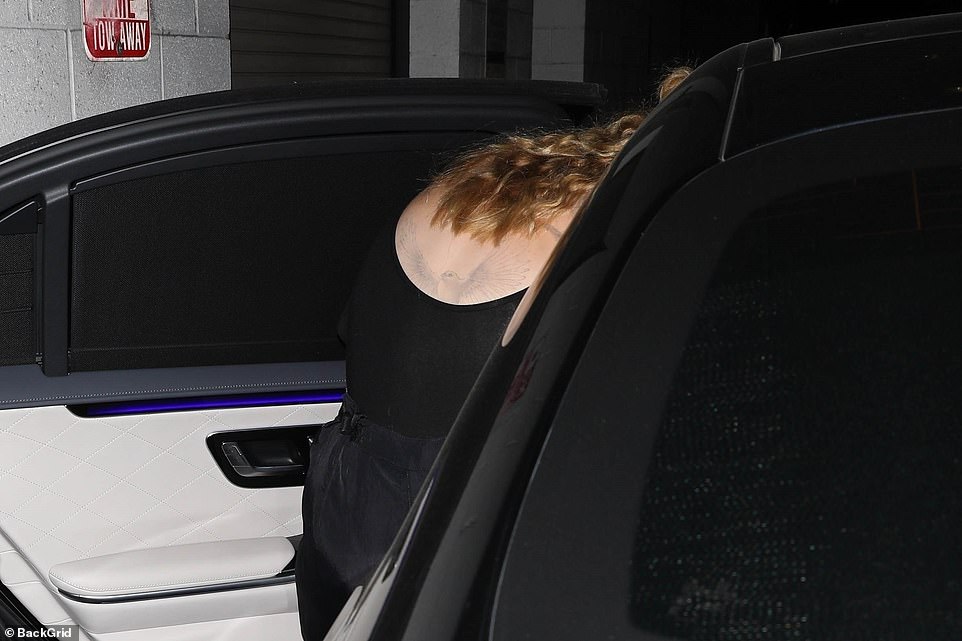 Going for the gold! The outing comes after Adele nabbed her first Emmy win for her TV concert, One Night Only 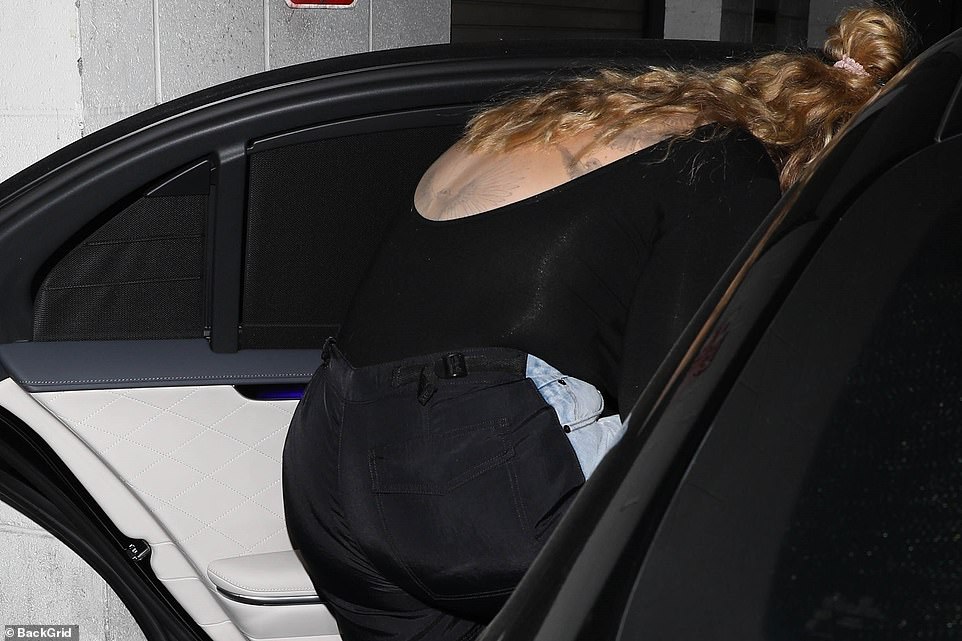 Birds of a feather: In addition to her new bird inking, she has another tatt of the winged creature on her right shoulder blade

The game, which appears to be a set of dominoes or Rummikub tiles, had ‘The Paul’s’ (sic) – with a misplaced apostrophe – clearly written on the side, leading one of the star’s 50.8million followers to ask ‘is you married?’ in the comments.

‘I can’t tell if I’m more excited by it or upset at the bad punctuation,’ quipped another.

The superstar and the multi-millionaire agent first met at a party a few years ago, and took their relationship public in the summer of 2021.

The musician was previously wed to charity entrepreneur Simon Konecki, the father of her nine-year-old son Angelo, marrying in 2018 and separating the same year. 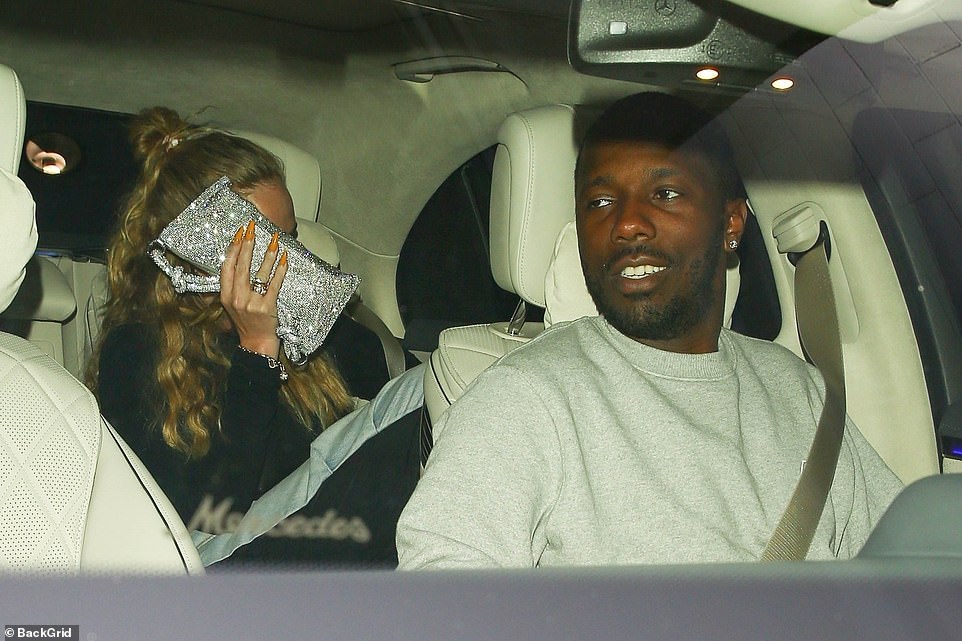 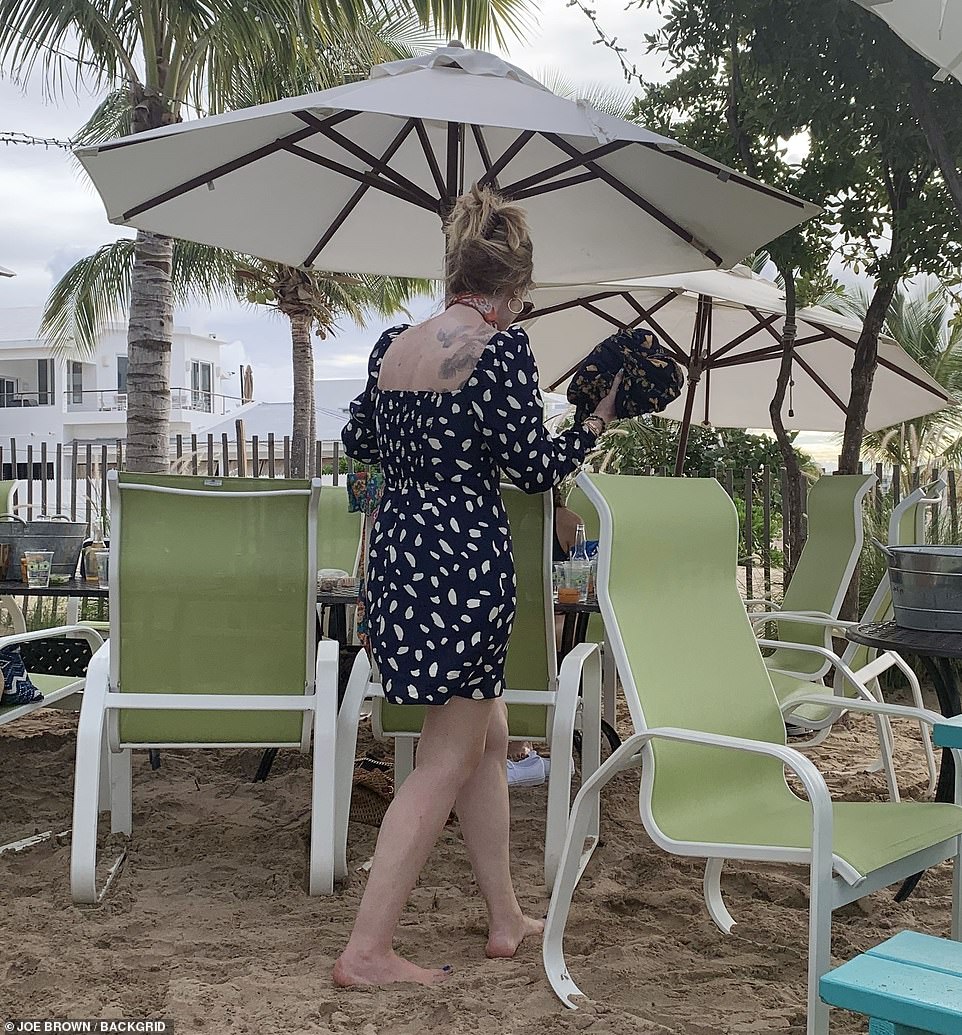 Tatt’s enough: Adele was spotted showing off her back tattoo in 2020, however it’s unclear if she had the new bird inking at the time

In an interview last month with ELLE UK, Adele responded to rumours she was engaged, quipping she ‘might as well be married.’

‘I’ve never been in love like this,’ she gushed. ‘I’m obsessed with him. I definitely want more kids.

She coyly added: ‘Well! Well. Well, I’m not married’ when asked if the ring she’s been wearing recently is an engagement diamond.

‘I’m just in loooove! I’m happy as I’ll ever be. I might as well be married,’ later confessing of her huge ring: ‘I’m not engaged. I just love high-end jewellery, boy!’

In May Adele moved in with Rich, who manages the likes of NBA star LeBron James, Anthony Davis, Ben Simmons, among other athletes, after a year of dating as she shared a snap of them outside their new $58million Beverly Hills home. 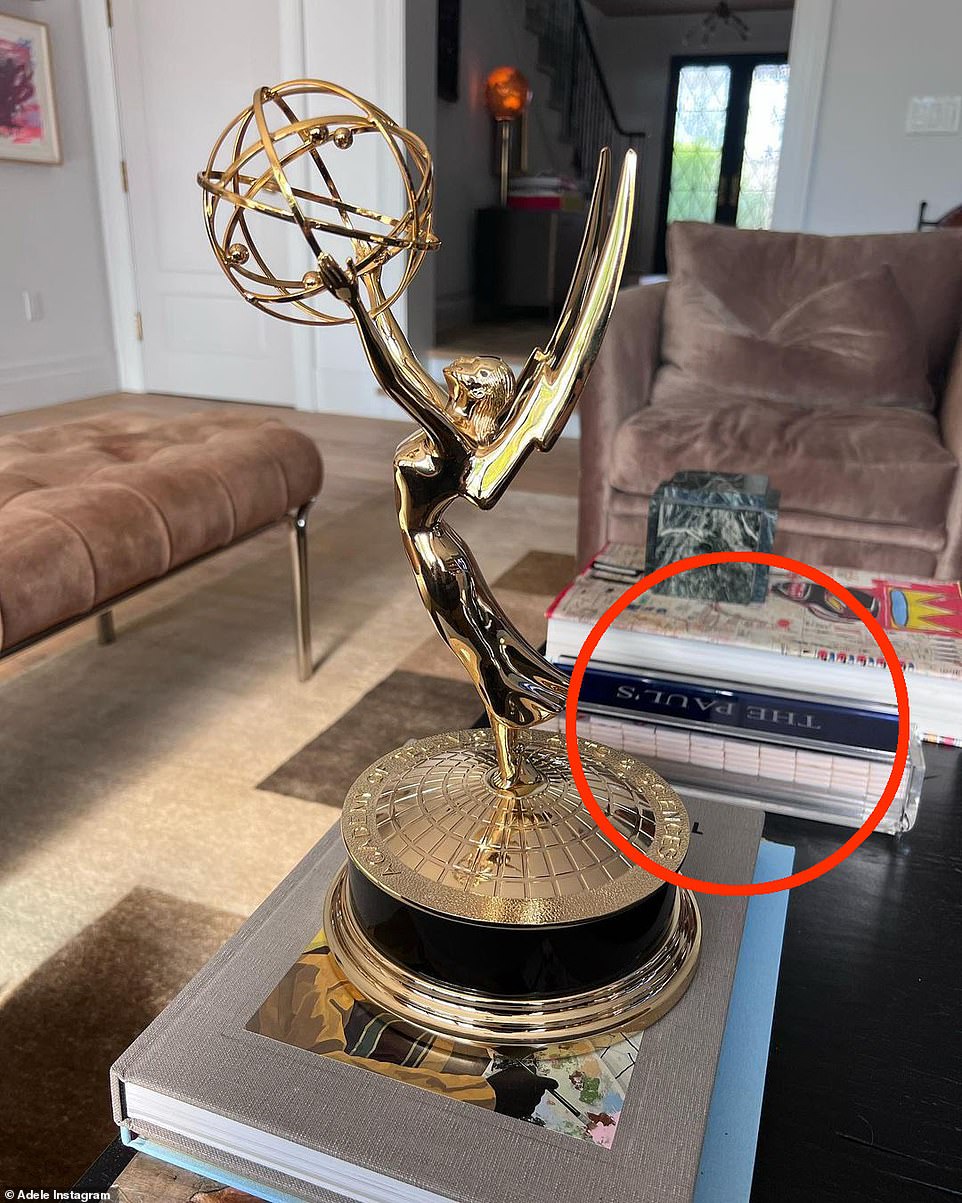 Mrs. Paul? In a snap of the gong sitting on her coffee table, a personalised game with the label ‘The Paul’s’ could be seen, prompting a flurry of comments from excited fans guessing the secretive star has married her partner of a year