Ammika Harris continues to share the cutest photos with her and Chris Brown’s son, Aeko! The model shared a cute snap on Oct. 28, that showed a sleeping Aeko cuddled up in her chest while he sucked on his thumb.

Aeko Catori Brown is getting cuter by the day! Ammika Harris and Chris Brown‘s 11-month-old son is already a star on social media. The model took to her Instagram Stories on Wednesday night to share a cuddly snap with her baby boy, writing, “I don’t know what I would do without you.”

The mother-son snap showed the pair in bed together while Aeko was napping with his thumb in his mouth. Meanwhile, Ammika had a protective arm around her son as she rested her chin on his head. They cuddled up together under a bunch of blankets after a presumed busy day at the beach.

Ammika, Chris and their son recently jetted off from London for a family vacation. The trio’s been enjoying quality time off-the-grid in an unknown beach location, as seen in photos on Ammika’s Instagram account. She shared a number of posts that included snaps with Aeko basking in the sand and sun. Ammika also showed off her incredible post-baby-body in a few solo bikini photos. 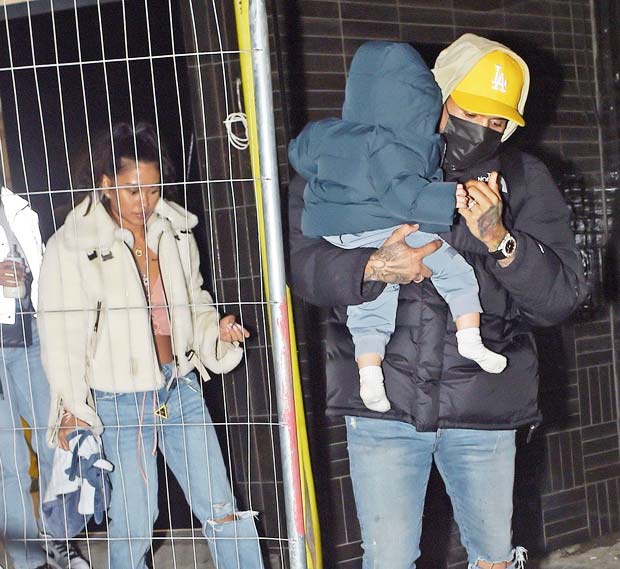 The family trip marked the first time Chris reunited with his son and his ex in six months. Earlier this year, they were separated overseas due to quarantine when Ammika took Aeko to Germany to see her family, and Chris remained in the states. Despite being apart amidst the COVID-19 pandemic, a source told HollywoodLife at the time, that Chris was in contact with Ammika and their son on a daily basis via phone and video.

Nonetheless, there’s nothing better than reuniting with loved ones. A separate source told HollywoodLife earlier this month that seeing Aeko “meant the world” to the “Go Crazy” singer. “Chris is obviously thrilled to be reunited with Aeko after all this time,” the insider said.

“He loves Aeko with all his heart and he’s been keeping updated on every aspect of his life along the way while they’ve been apart with videos, photos, and by FaceTiming with Ammika,” the source explained, adding, “But to be reunited in person and to be able to hold Aeko, play with him, hug him, and kiss him means even more.”

Ammika and Chris welcomed their first child together in November 2019. They kept their son’s birth a secret until weeks after he entered the world. It’s unclear if the on-off couple are back together, or if they’re just amicably co-parenting. Chris is also dad to daughter Royalty Brown, 6, from a previous relationship with Nia Guzman.