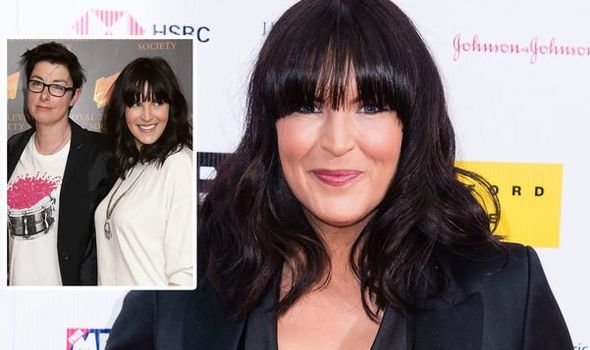 In an interview with Express.co.uk about her involvement with Purplebricks’ new TikTok campaign, she discussed her “chaotic” move into her own pad and how she hopes to one day share her home with children. The Naked Attraction host is said to have split from Sue Perkins, 52, after seven years in June.

Reports at the time said they decided to part ways following a disagreement over when to have children.

Neither Anna or Sue have discussed or confirmed their split publicly as they keep their personal life under wraps.

Addressing her future plans however, the presenter said she is still very much “keen” to adopt.

Anna, who joined the Changing Rooms team last year, said she understood the difficulties of decorating a home, following her own move earlier this year.

She spilled: “I moved into my own flat recently and had to sort of decorate it as well, yeah it’s absolutely chaotic.

“So, imagine that with three cameras and kind of 40 people traipsing through your house, it’s huge.”

Anna moved into her own home a few months ago and is enjoying having her own space.

Now free from lockdown, the presenter said she is in a much better place after the difficult period.

She spilled: “It was a few months ago that I moved out into my own space and I think a lot of people found lockdown very difficult.

“I know a lot of couples have, marriages have and a lot of families have, I think I’m just like lots of other people really, that they ultimately just needed their own space.”

On whether she was enjoying living on her own, she hesitantly said: “It’s great,” but was reluctant to speak further about her arrangements.

Anna was however happy to discuss her plans to adopt as she expressed her desire to have a family.

She continued: “I’m still pursuing that, I am very much in touch with Adoption UK because I did a podcast for them last year.

“I’m very keen to press ahead with creating a family, yes.”

For now, Anna is busy with her schedule working on Changing Rooms and Naked Attraction.

She has also launched a new initiative from estate agent Purplebricks, which will see high-speed 25 second preview tours of new homes on TikTok.

The campaign has been created following the fastest property sales market in a decade and new research released this week, which reveals British homebuyers take an average of 25 seconds to decide whether a house is right for them during a property viewing.

Over a third of homebuyers also said they would be swayed by a property if it was “social media ready”.

The presenter said of her involvement: “I can definitely relate to that gut-feel emotion we all deal with when it comes to making those all-important decisions, however that gut-feel intuition can make the process of selling your home a little harder.

“There are so many things we can do to make our homes more enticing so I’ve teamed up with Purplebricks on their ‘How to Guide for 25 second tours’ – a useful guide that highlights how we can use apps like TikTok to get our houses sold.”