Home » Celebrities » Arie Luyendyk Jr.s Wife Hospitalized Because Her Mastitis Is Getting Worse

The former star of ‘The Bachelor’ reveals that his wife Lauren Burnham, who gave birth to twins Senna and Lux in mid-June, will be staying overnight at the hospital after receiving ‘IV antibiotics.’

AceShowbiz –Arie Luyendyk Jr.‘s wife is suffering postpartum complications. More than a month after giving birth to twins Senna and Lux, Lauren Burnham was rushed into a hospital because her “mastitis is getting worse.”

Revealing Lauren’s health issue was her husband Arie. Making use of Instagram Story on Thursday, July 22, he shared a clip that saw the 29-year-old beauty lying in her hospital bed. “Not good, mastitis is getting worse even on antibiotics. Hate this for her,” he penned alongside the video.

The former star of “The Bachelor” followed it up with a photo of his sleeping wife. In the accompaniment of the post, he explained, “She’ll be here overnight. IV antibiotics and scans for any abscess. She’s been through a lot this week.” 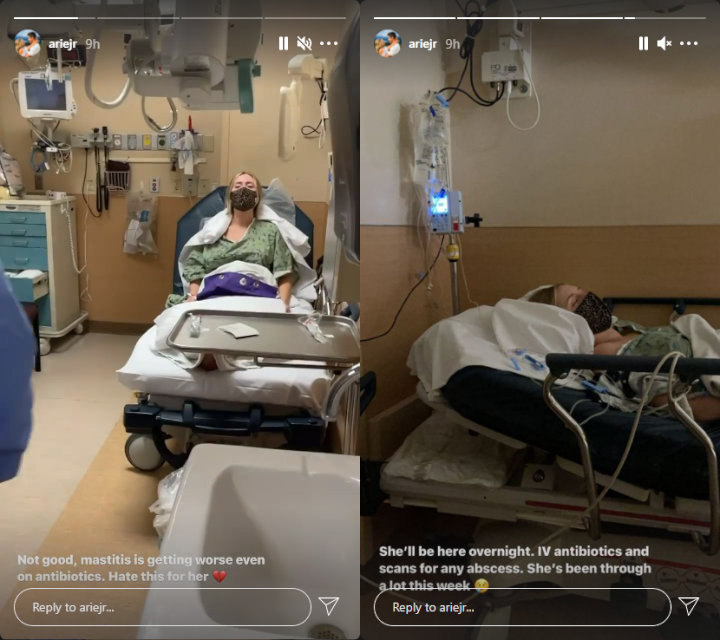 Arie Luyendyk Jr. revealed that Lauren Burnham was hospitalized due to mastitis.

Just two days earlier, the auto-racing driver informed his Instagram followers that Lauren is “struggling with mastitis [a breast tissue infection].” He then added, “I was up all weekend with the babies. Surviving over here.”

Arie and Lauren welcomed their twins on June 11. He then confirmed the baby’s arrival on the next day. “@luyendyktwins are here!” he declared on Instagram Story at that time. “Momma and babies are doing great and everything went smoothly… Spending time cherishing these moments, thank you for all the support [love].”

Unfortunately, Arie and Lauren’s newborn daughter Senna had to stay in the NICU for a week as she “needed oxygen.” Days after delivering the babies, the mother of three announced, “Today is so bittersweet… we get to leave the hospital… But little sis has to stay behind for now. I’ve never felt heartbreak like this. pls say prayers for our girl.”

Arie, meanwhile, gave more updates on Senna’s condition through a YouTube video. “She’s having some trouble with her breathing. She’s not on oxygen,” he disclosed. “She’s perfectly healthy. Her development’s just a little bit behind, so she gets really relaxed. Her heart rate slows down because of the breathing slowing and that is concerning.”

Luckily, Senna was eventually discharged from the hospital. She has since reunited with her twin brother Lux and her big sister Alessi.