“Black Panther” star Letitia Wright says she was just trying to raise her concerns about a potential coronavirus vaccine by sharing a video made by a vaccine skeptic … but she raised a major controversy instead.

Wright, who plays T’Challa’s sister, Shuri, got a ton of backlash after posting a link to a baseless anti-vaxxer video Thursday night on Twitter … and then tweeting her apparent support of its message.

In the vid, the presenter questions the safety and efficacy of vaccines in general, and gives fact-free opinions on what’s possibly in the COVID-19 vaccine and why it could be dangerous. Letitia included the prayer hands emoji with her post.

Soon afterward, she began engaging angry Twitter users who called her out for spreading misinformation … and explaining it away by claiming she was just asking questions.

After some more arguing, she tweeted … “if you don’t conform to popular opinions. but ask questions and think for yourself….you get cancelled.”

Don Cheadle, a fellow MCU star, got involved in the online war of words because angry fans tagged him about Wright’s tweets — and after watching parts of the vid she posted … he seemed pretty upset with her himself. 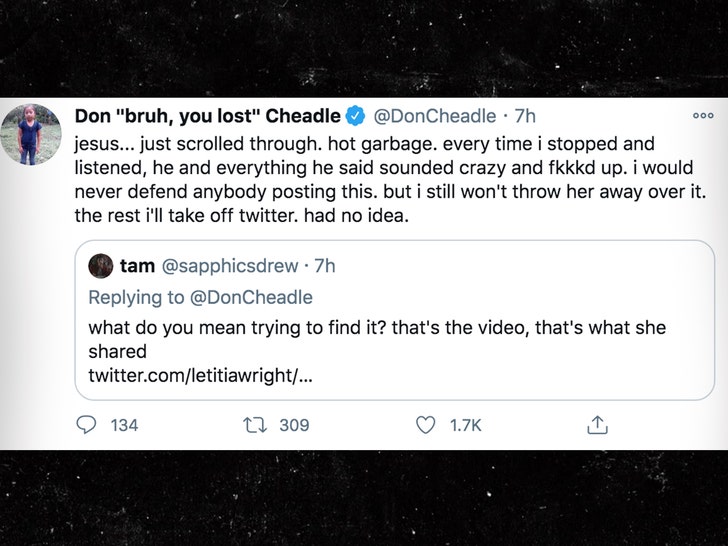 He wrote … “jesus… just scrolled through. hot garbage. every time i stopped and listened, he and everything he said sounded crazy and fkkkd up. i would never defend anybody posting this. but i still won’t throw her away over it.”

Wright has since backtracked a little from the message in the anti-vaxxer vid, and tweeted a half-apology Friday morning.

She wrote … “my intention was not to hurt anyone, my ONLY intention of posting the video was it raised my concerns with what the vaccine contains and what we are putting in our bodies. Nothing else.”