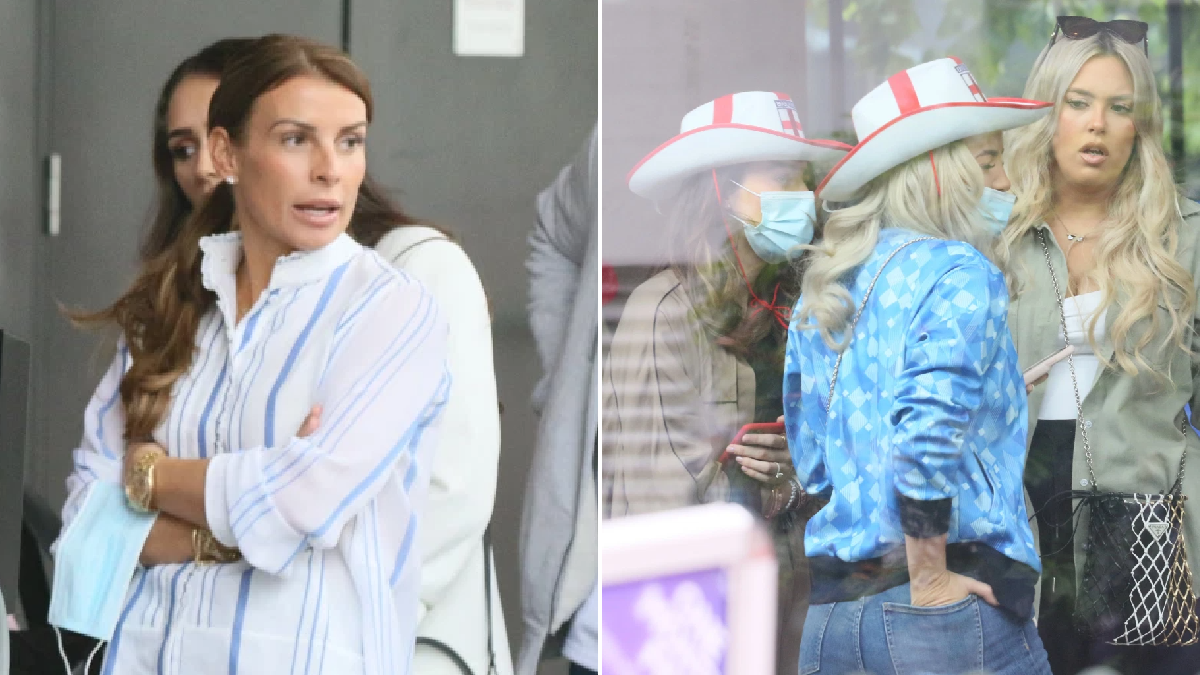 Fern Hawkins and Megan Davison, the WAGs of England players Harry Maguire and Jordan Pickford, are among the first to arrive at Wembley Stadium ahead of tonight’s Euro 2020 final, in which England will play against Italy.

They were both spotted making their way into the stadium, with the pair wearing matching England hats as they got into the spirit.

Both stayed safe by wearing face masks amid the ongoing pandemic, which match attendees are required to wear when entering the stadium.

Megan looked very colour coordinated in a blue jumper and jeans, while Fern opted to wear a brown coat.

It comes after both Fern and Megan enjoyed a cheeky girly night in last night, wearing matching England-style pyjamas.

Fern took to Instagram Stories to give followers a glimpse of their PJs, with the surnames of their respective partners sewn onto them.

As they both held a glass of alcohol in their hands, she captioned the post: ‘Pre match night with baby girl @megan_davison_.

‘Thank you so much @hadesignslts for our lucky pjs.’

The girls also got to indulge in a fakeaway sushi platter, which had been curated for them by a private chef.

Megan also showed off her England-themed nails, by resharing a post from her nail artist.

Wayne Rooney and Coleen Rooney were also spotted arriving at Wembley, with a few hours to spare before kick off.

Coleen looked casual in a striped blouse, shorts and white trainers, while Wayne dressed in a polo and navy blazer, with matching blue trousers and trainers.

Wayne was accompanied by security as he made his way to the venue as swarms of fans tried to get photographs.

Ahead of tonight’s match, plenty of England fans have flooded central London as they anticipate the big final.

One group of around 30 jumped on top of a stationary single-decker bus close to Wembley Stadium this afternoon as they danced and joined in songs including ‘England ‘til I die’.

Hundreds of excited supporters also turned Leicester Square into a sea of red and white as they released flares and joined in chants.

Many danced through the streets on their way to bars or to Wembley itself with just hours to go before kick-off.

The Metropolitan Police have urged fans not to come to London unless they have match tickets or somewhere booked to watch the game.

Officers have said it will be deploying ‘a great many officers and specialist units to prevent crime and disorder and respond to any incidents right across London’.

The final, which is expected to attract a record television audience, is due to kick off at 8pm and will finish by 10pm if it ends in normal time, but could end closer to 11pm if there is extra-time or a penalty shootout.