Home » Celebrities » In Pitch to Go Public, BuzzFeed Redefines Itself As a Tech Company

Why Buying Roku Does (and Doesn’t) Make Sense for Comcast

In Pitch to Go Public, BuzzFeed Redefines Itself As a Tech Company

Analysis: The company is seeking $200 million on a valuation that doesn’t apply to content companies

BuzzFeed, the digital media company founded on cat videos and which just days ago won its first Pulitzer Prize, announced plans to go public via a SPAC on Thursday — and in one neat move, redefined itself as a tech rather than a content company.

The reason for that was simple and clearly laid out in its investor presentation: BuzzFeed is seeking a $1.5 billion valuation, based on a projected profit of $117 million by the end of 2022 that will mostly come from e-commerce. The valuation represents a multiple of 13 times the profit, which is in line with a tech company but is way more aggressive than what a 15-year-old content company would do.

“Virtually all companies are cloaking themselves in a mantle of tech,” said Peter Csathy, founder of advisory firm CREATV Media. “The market rewards that with higher valuations and higher multiples. It is certainly a key financing strategy to position yourself more as a tech company than a media company. BuzzFeed is fundamentally a content company but serves up content in a tech-transformed world.”

According to the presentation, the company is heavily promoting its massive reach and recognition among Millennials and Generation Z, as well as the technological innovations it has developed to create viral content, such as a powerful CMS and headline automating tool.

But the expected growth highlights its “shift to e-commerce accelerated by COVID-19, expanding markets as the modern consumer discovers and buys new things.”

BuzzFeed has already seen some success from e-commerce, releasing branded cookware and collaborated on a branded sex toy. The site regularly uses affiliate links to get partner revenue from Amazon. In 2020, it said, commerce revenue was at 13% and by next year, should be at 23%.

BuzzFeed pointed to its “rapidly scaling higher margin commerce revenue stream expected to be ~31% of total revenue by 2024.” In its diversified revenue model, BuzzFeed listed commerce, content and advertising. Commerce is what sets it apart from other media companies that rely on advertising and subscriptions to make most of their money. 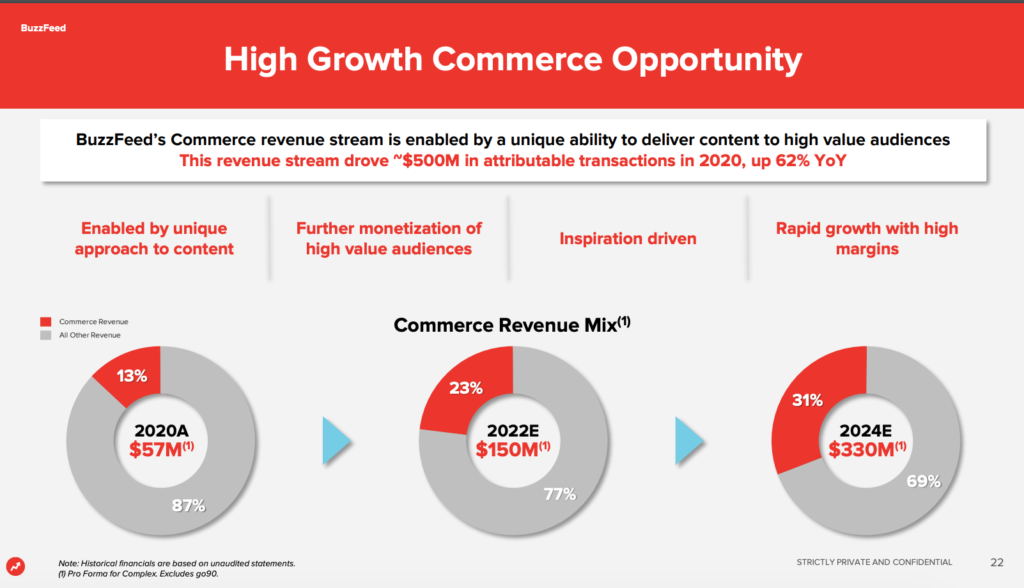 And surprisingly, the investor pitch puts notably little emphasis on its news-gathering operation, completely omitting the fact that its news division just won its first Pulitzer Prize, a historic achievement by a digital media company.

A representative for BuzzFeed refuted the idea that the company is going down the tech road: “We’re talking about going public at a valuation that’s less than 3x our combined 2021 revenue. Tech companies usually go public at 20x revenue.”

The company has always had appeal to outside investors, even before the various periods of growth highlighted in its pitch. Since 2016, NBCUniversal has made a $400 million investment in BuzzFeed, intended to be distributed on viral news and video on the platform, while also bringing BuzzFeed to some of its broadcast properties. It was one of the biggest digital bets in the big media industry, with Disney’s $400 million investment into Vice Media being the only one that comes close.

But one senior e-commerce executive who works extensively with media companies was skeptical that BuzzFeed could increase e-commerce revenues to one-third of its gross revenues in a few years.

“Growing is a lot harder than you think,” the executive said. “You can drive low-margin dollars. But I don’t think they can move into owned commerce that easily.”

“I don’t think this is a long-term media brand value with the consumer at the center,” said the e-commerce executive. “The future is niche, community-driven, with diverse revenue mix.” He added: “There’s so much smoke and mirrors in the convergence of media and e-commerce. People don’t know much about what it takes to generate demand. It’s really hard.”

Thursday’s announcement also included plans to acquire Complex Networks, another line of brands with a strong reach among younger audiences. In the pitch deck, BuzzFeed highlights Complex Shop as an e-commerce destination.

The move to go public is a smart one for BuzzFeed, according to Gary Kaltbaum, president of Kaltbaum Capital Management and host of the nationally syndicated radio show “Investor’s Edge.”

“Unlike many other SPAC deals, there is meat to this deal,” he told TheWrap, highlighting BuzzFeed’s $321 million sales with $31 million earnings before EBITDA, and the company’s estimates for 2022 strong at $654 million in sales and $117 million in earnings. “The big question is: Who else will sign up with them and how much will they be able to grow in a viciously competitive environment? But the numbers are compelling if they pan out.”

Elliot Lutzker, chair of the corporate group at Davidoff Hutcher & Citron, agreed: “BuzzFeed’s proposed merger with a SPAC, a shell company created to acquire a private one, is more grounded than many recently completed mergers. BuzzFeed has already started to consolidate other digital media companies and has a track record for investors to see rather than merely projections or non-binding purchase orders.” 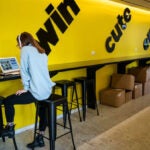 The millennial-focused media company has touted its competitive edge when it comes to the tech stack that powers its content — developing machine learning capabilities and proprietary quiz makers as part of their digital content strategy. BuzzFeed, long known for the popularity of its online quizzes, said 37 million people have taken their quizzes, and they are constantly working on new formats. On the news side, BuzzFeed’s tech also works after the publication of an article to optimize for the best headline.

Perhaps adding to its digital-first success recipe is the ability to use that tech in order to design and scale their content, allowing them to potentially monetize both content and commerce in a variety of ways. But how much of the tech is built in-house and how much of it is rented makes a difference, especially to investors, Csathy said.

As the SPAC market has heated up in recent months, increasingly companies that may not have previously gone this route now consider it a viable way to go to market. Around 2018, BuzzFeed was gearing up to IPO with a $1.7 billion valuation at the time. But the SPAC frenzy has certainly “cooled down” lately, Csathy added. In BuzzFeed’s case, this may come down to timing.

Others have made similar pivots as the SPAC scene heated up in recent years. Real estate company WeWork announced its plan in March to go public after merging with SPAC BowX Acquisition Corp. That deal valued it at $9 billion, a major departure from the previous $46 billion valuation in 2019. The company had postponed its plans for a traditional IPO for two years, facing heavy debt and large losses.