When firing back at pregnancy speculation, the former ‘Teen Mom’ star says that it’s ‘what a natural body looks like’ before telling the social media critics to ‘close [their] eyes.’

AceShowbiz –Jenelle Evans has made it clear that she didn’t appreciate the pregnancy speculation by a social media follower. After an internet troll said that she’s “pregnant again,” the former “Teen Mom” star called out the “ignorant” body shamer in a new video.

The 29-year-old reality star first shared a video of herself and her 4-year-old daughter Ensley doing some TikTok dances in their swimsuits while enjoying a day by the water. In the comment section, she received a reply that read, “Pregnant again.”

Firing back at the internet troll, Jenelle played an audio clip from Day Desiree. In it, she mouthed the words, “Um no, dirty that’s what a natural body looks like. And if you don’t like it, close your eyes and don’t open them again. Next time you breathe, don’t.” Responding to the commenter, she captioned her video, “Yall always comment something ignorant.”

After she slammed the body shamer, many of her fans showed their support. “Yess!! Normalize all body types are beautiful!!” one wrote, while another praised her as saying, “Amazing momma, and looking better than ever! You have that healthy glow! To all the people who doubted you would get here just look at her now.” A third, in the meantime, wrote, “Yall, she is just existing why are yall bringing her body into it? This post wasn’t about body positivity. She’s just existing.”

More recently, Jenelle faced backlash online after she posted another TikTok clip that saw her saying “f**k” in front of her daughter Ensley. In her latest post, she lip-synced to a voice that sounds, “My personality is like, ‘I don’t give a f**k’ but my anxiety be like, ‘I do.’ “

“Great to say in front of your little girl who learns from you,” one TikTok user criticized. Meanwhile, another wrote, “Wow the language around your daughter??” A third critic also asked her, “WHY ARE YOU SAYING THAT IN FRONT OF YOUR DAUGHTER?”

In response, Jenelle defended herself in her comment section, “And for any MOM SHAMERS.. Ensley knows that’s a cuss word and she’s not allowed to say it.” As if her comment wasn’t enough, she turned to her Instagram Story to write a similar statement that read, “For all the mom shamers..Ensley knows that’s a bad word and she isn’t allowed to say it.” 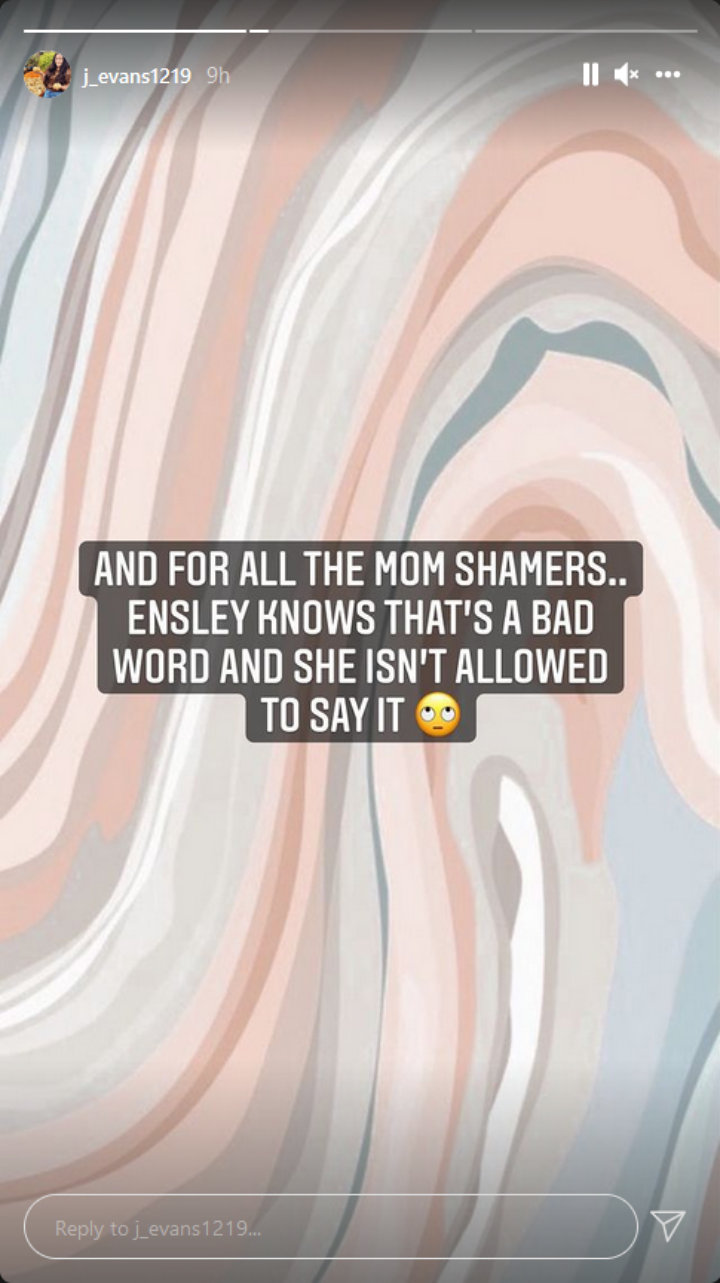