Total agreement. Jinger Duggar and Jeremy Vuolo reacted to TLC’s cancellation of Counting On, and they think the network made the right call.

Josh Duggar Child Pornography Trial: Everything to Know Before Trial

“We are grateful for TLC giving us the opportunity to be on their network over the years and their kindness towards the Vuolo family,” the couple wrote in a statement via Instagram on Tuesday, June 29. “It’s been a remarkable journey that has opened doors to traveling and experiencing the world in a way that we wouldn’t have imagined possible.”

Jinger, now 27, was 14 when 19 Kids and Counting premiered in 2008, and she appeared on the spinoff, Counting On, for several seasons alongside her husband, 33. 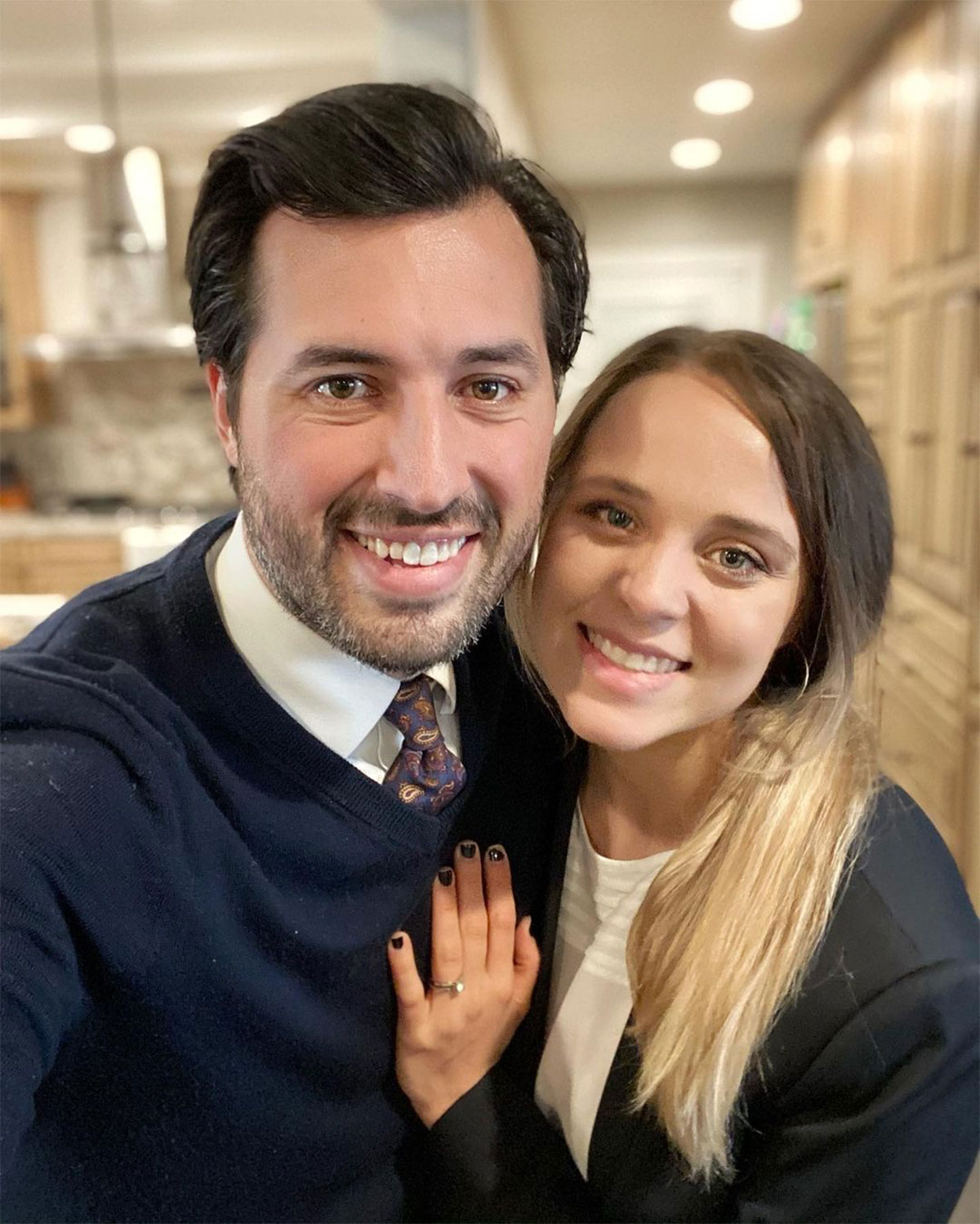 “We wholeheartedly agree with TLC’s decision not to renew Counting On and are excited for the next chapter in our lives,” they continued. “We’d like to thank our fans, friends and the amazing film crew who have shown us love and support. We look forward to continuing our creative journey in Los Angeles and seeing what the future holds.”

Jinger and Vuolo were the first to react after TLC dropped the Arkansas family completely amid Josh Duggar‘s child pornography case.

“TLC will not be producing additional seasons of Counting On,” the network said in a statement to Us Weekly on Tuesday. “TLC feels it is important to give the Duggar family the opportunity to address their situation privately.”

The Duggars: A Comprehensive Guide to the Famous Family

Josh’s legal troubles spurred the decision. The reality TV alum, 33, was arrested on charges of receiving and possessing child pornography in April. He allegedly possessed images of children under age 12 being abused. 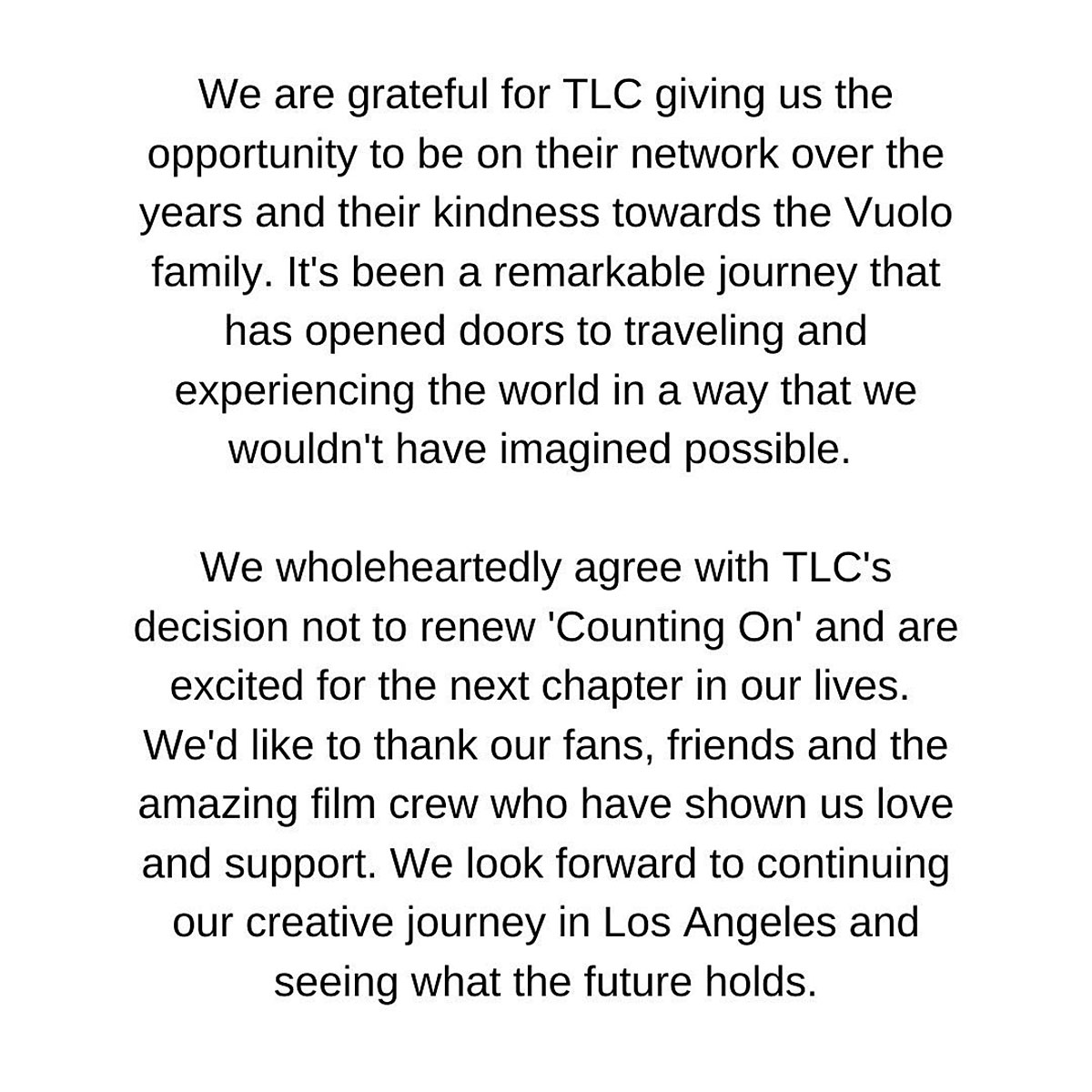 Josh entered a not guilty plea and requested to extend the trial date. Instead of a July start, his trial is now scheduled for November 30. If convicted, the father of six (soon-to-be seven) could face up to 20 years in prison and $250,000 in fines.

This isn’t the first time Josh’s legal troubles have cancelled his family’s docuseries. 19 Kids and Counting ended in 2015 after it was revealed that the eldest Duggar sibling was accused of molesting multiple young girls when he was a teenager. He also admitted to cheating on his wife, Anna Duggar, before going to rehab for pornography addiction.

“I brought hurt and a reproach to my family, close friends and the fans of our show with my actions that happened when I was 14-15 years old, and now I have re-broken their trust,” he said in an apology to both Anna and his family at the time.

Counting On started later that year to document the family without Josh, initially focusing on older sisters Jill Duggar and Jessa Duggar before expanding to cover everyone except Josh.

Jinger previously opened up about how Josh’s 2015 troubles strengthened their family bonds.

Jinger and Jeremy’s Book: 13 Revelations About Courtship, Miscarriage and More

“Our family was way closer because of that, and in spite of that, I guess you’d say,” the Hope We Hold author told Us in April. “I will never forget how I felt in that moment. And I think even everything that happens in our lives — because we’re in the public eye — it makes it more challenging because then it’s not just dealing with these things inwardly, but you have to give an answer to the world. That makes it a much tougher thing to walk through.”