How we swooned at the sensual hip action that Kelvin ‘Flexible’ Fletcher showcased on Strictly, en route to winning the glitterball.

The actor (whom most of us had remembered only as the somewhat puny young lad ~who’d played Andy Sugden in Emmerdale) gave the whole country a jolt when he peeled off his shirt to reveal an astonishing six-pack.

Week after week, he proved he had the moves to match the muscles. Imagine being held by those arms!

Today, less than two years on, one lucky lady is. Alas, that lady is a sheep, being straddled by Kelvin in a field in the Peak District.

The sheep is not thrilled. Nor — hilariously — is Kelvin’s instructor, who is not Oti Mabuse but instead a straight-talking sheep farmer called Gilly. 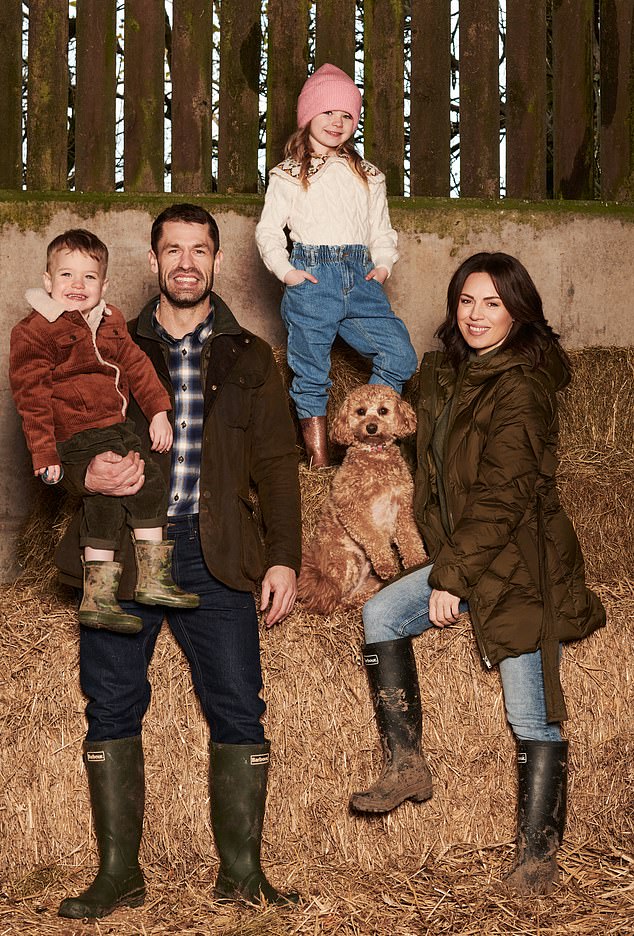 Instead of pursuing the Hollywood dream (which had been Plan A after his Strictly triumph, he reveals today), he bought a 120-acre farm and started a new life. With a tractor. Please do not get him started on how much he loves that tractor

Gilly has already called Kelvin a ‘blinkin’ wuss’ — which is not a description any of the Strictly judges ever used — as he attempts to administer a worming treatment to the animal.

‘Are you trying to ride it?’ she asks, as Kelvin — or Farmer Kelvin, as we must now think of him — dismounts.

There is swooning today, but it comes from 37-year-old Kelvin himself. As well as having to grapple with worming, he has had to deal with sheep foot rot, which involves scraping out putrid blood and maggots. Kelvin hates maggots (‘it’s why I’ve never fancied fishing’).

‘Are you going to faint?’ Gilly asks him, as he slides to the floor in a move that, frankly, could have been more elegant.

The scenes — funnier than anything seen on Emmerdale, and less sexy than anything on Strictly — are played out in Kelvin’s latest TV project, which involves learning how to run his very own farm.

We say TV project but, actually, it’s more than that. Farming is now Kelvin’s life, and his day job. A lot of people went a bit loopy in lockdown, in terms of taking on new life directions, but he seems to have gone more off-piste than most.

Instead of pursuing the Hollywood dream (which had been Plan A after his Strictly triumph, he reveals today), he bought a 120-acre farm and started a new life. With a tractor. Please do not get him started on how much he loves that tractor.

So what does he know about farming? Well, he pitched up for his first proper day of farm work wearing trainers, since he didn’t own a pair of wellies.

‘At the start of all this, Gilly [the farmer next door-turned-teacher] assumed a level of knowledge that I just didn’t have. Bless her, but I spent a lot time saying: ‘Can we just rewind. What is a ewe? Is it a boy or a girl sheep?’ She’d just laugh, but seriously, she needed to break it down to basics.’ 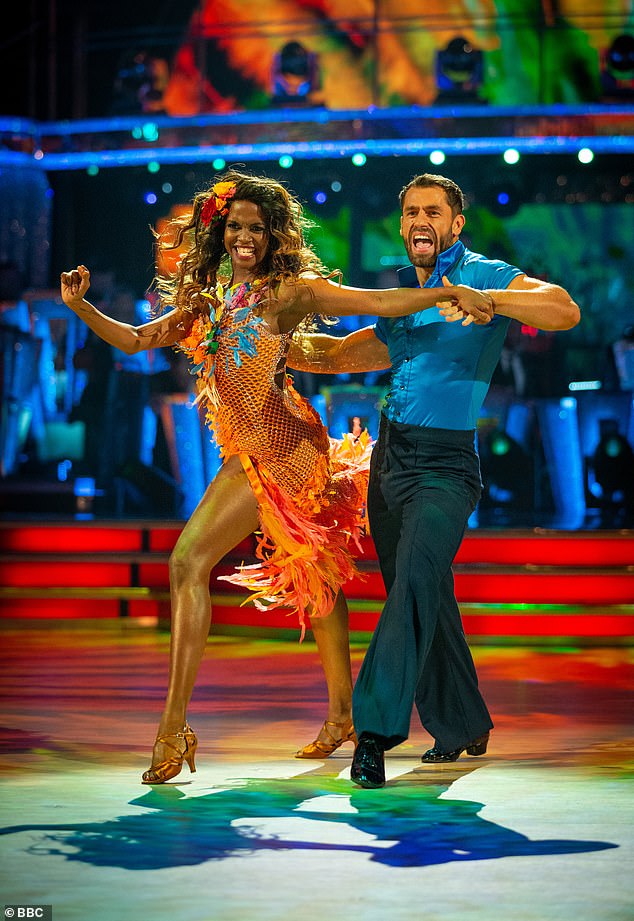 How we swooned at the sensual hip action that Kelvin ‘Flexible’ Fletcher showcased on Strictly, en route to winning the glitterball. He is pictured above with Oti Mabuse

We can only pray that he has worked out his boy sheep from his girl sheep. He and his wife, Liz (also an actor), tell me that they have 28 sheep, but hope to have a flock of ‘about 80’ by next year.

They also have three pigs, three alpacas, two rabbits. Oh, and two children (Marnie, five, and Milo, three), with another on the way.

The phenomenon of celebrities embarking on a Good Life adventure is nothing new. A slew of them have been hard at it.

Most incredibly, Jeremy Clarkson became perhaps the most famous farmer in Britain, when he turned the cameras on and started getting involved in the farm he had owned quietly for years.

So is Kelvin hoping to become the new Clarkson? ‘Well, if the BBC want to pay me what Amazon are paying Clarkson, that would be fine with me,’ he agrees.

Kelvin insists his own TV show —he was signed up by the BBC for a six part fly-on-the-wall documentary series — came about completely by chance.

‘We were talking to the BBC, about other things entirely and this came up,’ he says. ‘There’s a huge appetite for this sort of show and they’re all very different in their own ways.’

At least Clarkson and Baker owned farms before. Kelvin had only ever been on a fictional one and even that didn’t provide as much training as you’d expect.

In the middle of our interview, his wife turns to him and asks, in all seriousness: ‘Did you actually touch an animal when you were doing Emmerdale?’

But what’s immediately obvious is that Kelvin is an ambitious guy who isn’t afraid of a slog. He came into Strictly late in the day, as a replacement (for the Made In Chelsea star Jamie Laing, who was injured). What happened surprised everyone — Kelvin included.

The dark horse, born and bred in Oldham, quickly showed that he had not only dance skills, but popular appeal. ‘I feel a bit cringey when I say it, but for people to invest in you like that, to be bothered enough to vote, is so humbling,’ he says.

The Strictly experience was also a lesson in excelling in a world for which you have no training.

‘It’s extraordinary, really. You start on the Monday, thinking: ‘I can’t do this — we’ll have to make it easier.’

By Wednesday, you are still failing. Then, on Thursday, something falls into place. By Saturday, you are doing the dance in front of the nation.’

There were downsides to suddenly becoming the most popular man in Britain. His marriage to Liz — the first girl he had ever kissed, aged eight — came under scrutiny. They had gone their separate ways after school but reunited and married in 2015.

When Kelvin was photographed drinking with his Strictly partner Oti at 3am, the rumour mill went into overdrive. 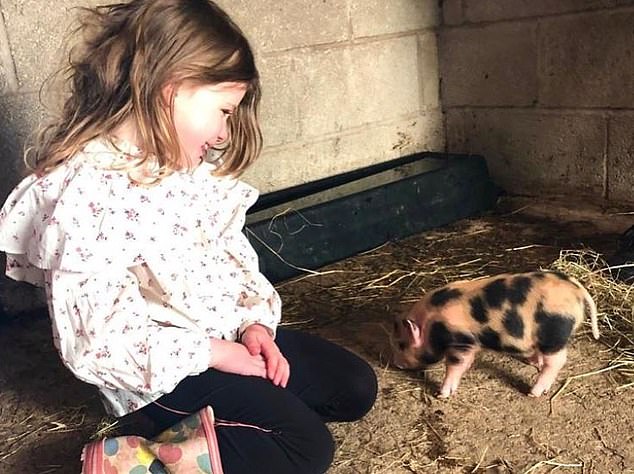 ‘I used to see farmers with a rip in their jackets and think: ‘Why don’t you just buy a new one?’. Now I have rips all over mine and I think ‘that’ll do me’, because I’m happy. Liz is happy, the kids are happy. We are all just mucking in’

Liz was reportedly furious and much was made of the fact that she was photographed without her wedding ring.

Nothing to see here, the couple said at the time (she explained the fact she wasn’t wearing her ring by saying it was a ‘fake tan day’).

Given the buying-a-farm development, and the imminent arrival of a third baby, it’s safe to say all is well in the marriage now.

As Liz points out, their new life has provided precious family time. ‘We’ve always lived separately really and had to fight for time together. For the first time, we now have it.’ she explains.

They start to joke here about couples who, in lockdown, have discovered they actually hate one another. ‘Do you like me?’ he asks her. ‘I do,’ she replies.

The real myth is that all the showbiz doors are flung open after a Strictly win. This was not the case for Kelvin. There was a string of ‘no’s’ and not-quite-right offers as he waited for the right project to come along.

He was determined to capitalise on his Strictly success and a move to California was a calculated risk.

‘I’d left Emmerdale for that sort of freedom — to take a risk,’ he says. ‘Every budding actor thinks: ‘Let’s see if I can make it big in America.’ However dreamy that may sound, we thought ‘why not?’ We were in a good position financially, we were both relatively free. We could take the kids.

‘We’d sourced somewhere to live. We’d got the visas. We were ready for this big adventure . . . then the pandemic hit and we got an email from the embassy saying they were putting a hold on all alien workers coming in. From there, we had to reconfigure.’

Buying a 120-acre farm is quite a reconfiguration! ‘It is, but it’s also an adventure and it was the adventure I was after,’ Kelvin says. ‘Something different, a challenge.’

They were living in Macclesfield at the time, but he says he’d always hankered after somewhere more rural. In the middle of the first lockdown he spotted, on Rightmove, the farm that is now home.

‘I wasn’t thinking of being a proper farmer, not then. I thought maybe we’d let other people rent the land.’ Liz thought he’d taken leave of his senses. ‘I said: ‘It’s all very nice, Kelvin, but it’s a farm, and we aren’t farm people.’ ‘

She also pointed out that as well as having no ‘country clothes’, she was allergic to horses and possibly other animals as well, but she agreed to go and take a look. She, too, fell in love.

Almost a year after they had put in an offer, they moved in and since last spring they have been quietly taught the ropes from Gilly, picking up the basics from her flock of sheep before buying their own.

The learning curve has been steep. Kelvin talks a lot about fences and how to install them. Also about rotavators. He is a harrow trailer nerd (it turns over soil, since you ask).

On Christmas Day, he was to be found trekking out to treat a lame sheep.

As a money-making venture, though, it’s madness, surely? To date, they have sold only two sheep, so presumably they aren’t yet wealthy farmers? Or even breaking-even farmers?

‘Not when you consider the cost of buying the place, but you almost have to take that out of the equation,’ Kelvin says. ‘The sad thing is that most young farmers — or new farmers, like us — can’t afford to just buy a farm like this.

‘That said, we don’t want to be hobby farmers. It’s going to be a commercial concern. There is never going to be great money in it because we won’t be doing it on a scale to supply the supermarkets.

‘When you look at the figures, at the moment I’d make more as a joiner, but the challenge is doing it properly and having pride in what we are doing.’

The longer-term plan is for both he and Liz to continue to act, taking on showbiz jobs when they can.

So, no, the Hollywood dream has not been put to rest quite yet.

‘I want it all!’ he admits. ‘So far it’s doable. It fits round family life and acting jobs.’

What do his old showbiz mates think of this life change? He is still in touch with his Strictly pals, and there have been some jokes about him having ample space for barn-dancing.

‘But some of our friends don’t even know yet — we had to keep it quiet because of the TV show,’ Kelvin admits.

‘They’ve seen pictures of us and have said, ‘Are you out for a walk?’, not realising it’s our land.

‘Of those who do know, some think we are crazy.’

He is certainly dressing more like a proper farmer these days, owning ‘a whole range of overalls and hi-viz pants’. They are as proudly worn as his sequins used to be.

‘I used to see farmers with a rip in their jackets and think: ‘Why don’t you just buy a new one?’. Now I have rips all over mine and I think ‘that’ll do me’, because I’m happy. Liz is happy, the kids are happy. We are all just mucking in.’