Kylie Jenner and Stormi were in pure heaven in their new campaign video for the new Kylie Baby product line, which is both clean and vegan.

Kylie Jenner, 24, and her sweet daughter Stormi Webster, 3, just owned the internet with this adorable new video to launch Kylie Baby! The beauty mogul and her toddler transported fans into a cloud-filled pink-and-blue fantasy world for the campaign, and looked like they were having the time of their lives. The video opened with Kylie and Stormi walking hand-in-hand on a body of water. As the two made their way through the clouds, a heavenly white staircase emerged. 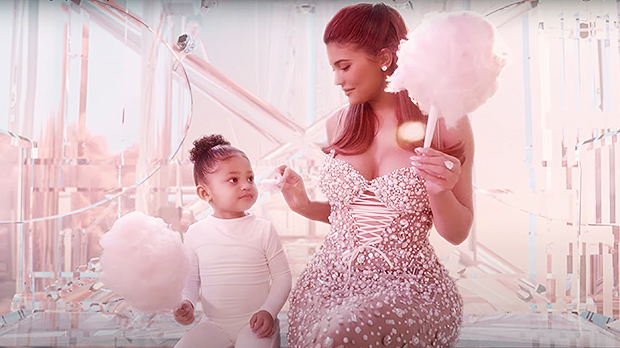 Stormi looked ecstatic as her gorgeous mom pointed towards it, and the two made their way all the way to the top! Of course, fashion was front and center for the short video: little Stormi looked so cute in a bubblegum pink dress with a bow detail, keeping her hair up in a bun. Meanwhile, Kylie was serving some serious ’60s vibes with a dash of Jetsons in her belted white coat dress and chunky boots. She rocked a bright red hair shade for the look, rocking a stylish up-do.

Once the pair reached the top of the staircase, Stormi’s face lit up once again as she spotted a theme park up in the clouds. Hot air balloons surrounded a ferris wheel and carousel as song “Lottery” by Kali Uchis played. “If I told you I was yours…You’re an angel and I’m blessed/Oh, I am trying to do my best/Want you to know how very nice it was to meet you,” Uchis croons on the upbeat soul track.

Large bottles of Kylie’s new baby product line also appeared in the clouds, which includes a gentle bubblebath, shampoo and body lotion. The Keeping Up With The Kardashians star announced the release of her latest venture, which is clean, vegan and conscious. “It was a dream of mine to develop clean, safe, effective, and conscious baby care when I became a mom,” Kylie, who is expecting baby number two with Travis Scott, 30, said in the announcement. Notably, the California native filed the trademark for Kylie Baby in 2019.

“I know we all want the absolute best for our kids so making this line completely vegan and hypoallergenic was very personal to me! I’m so proud of these products and couldn’t wait to share this with you and your family!” the Kylie Cosmetics founder also said. Even better — the products are Stormi approved!

The ad continued with the mother-daughter duo going for a ride on the ferris wheel, but not before a quick outfit change: Kylie looked drop dead gorgeous in a crystal covered gown as she reached down to grab some cotton candy. She then swapped the formal wear for a more casual blue gingham dress while going for a spin on a swing ride, before finally collapsing into a canopy bed with her cute toddler.