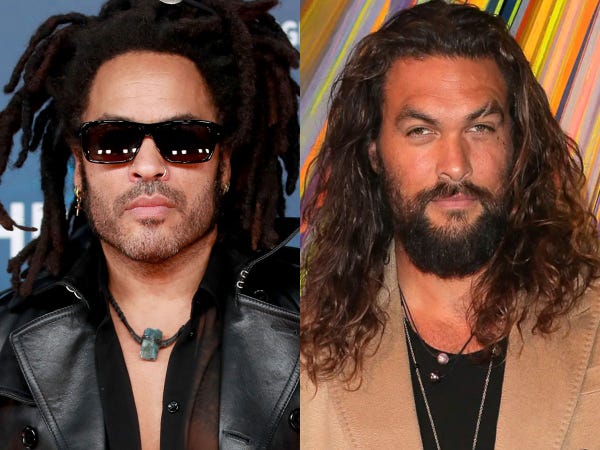 Lenny Kravitz said that he and Jason Momoa, who married the musician's ex-wife Lisa Bonet, immediately hit it off in an interview with Men's Health on Thursday.

"People can't believe how tight Jason and I are, or how tight I still am with Zoë's mom, how we all relate," the 56-year-old musician said, referring to his and Bonet's 31-year-old daughter Zoë Kravitz.

He added, "We just do it because that's what you do. You let love rule, right?"

And though Kravitz is now very close with his ex-wife's family, he admitted that their relationship took some effort in the beginning.

"I mean, obviously, after a breakup, it's work — it takes some work and time, healing and reflection, et cetera," he said. "But as far as Jason and I? Literally the moment we met, we were like, 'Oh, yeah. I love this dude.'"

Both the singer and the actor have openly expressed admiration for each other throughout the years.

"Happy Birthday @prideofgypsies. One family. One love," he captioned the post.

Momoa has also spoken about his friendship with Kravitz and even gifted the rockstar a skull ring in 2018.

"My friend, he made this bone ring since I wanted to get one, and he liked it so I wanted him to have one," the "Game of Thrones" actor told Entertainment Tonight of the present.

He agreed that the ring was a symbol of familial ties.

"Yeah, looking out for each other for sure," he told the outlet.

I’m a huge fan of the artists I meet on instagram love spreading the aloha. I got @lennykravitz a present made by @leroyswoodentattoos amazing bone skull ring. Check him out insta. Mahalo lenny for coming to support me on @nbcsnl aloha j

Kravitz previously called Bonet his "best friend" and said Momoa is "like a brother" during a 2019 interview with The Times.

"You go through a marriage with somebody, you break up and it's very difficult. But [Lisa and I] put the work in and we took the time so that we could become best friends again," he said, continuing to explain that their families are "blended."

The singer added, "I love her husband — he's like a brother to me — and I love the kids. It's beautiful, but it takes work."