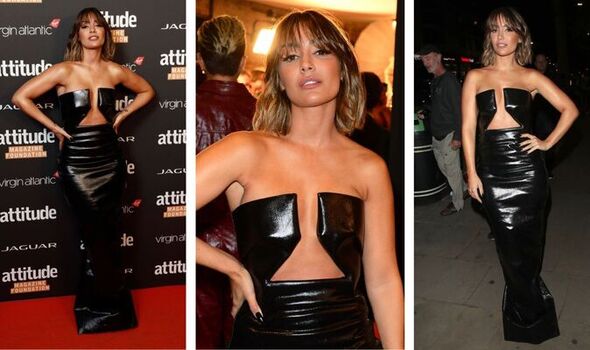 Frankie Bridge stunned on the red carpet as she celebrated icons from LGBT culture along with other celebrity revellers at this year’s Attitude Awards.

Loose Women panellist Frankie Bridge, 33, who previously starred in pop group The Saturdays, arrived at the Attitude Awards yesterday in a shiny strapless leather dress with a cut out waist and a bust section that barely concealed her assets.

The awards ceremony, held at London’s Roundhouse, is a celebration of the top talents in LGBT culture, and Frankie amped up her look for the glitzy event.

The material of her dress was slightly holographic, reflecting different colours as it hit the light.

Meanwhile, the star was joined on the red carpet by the likes of Ellie Goulding and former Spice Girl Mel C, both of whom scooped awards at the bash.

Frankie Bridge flashed the flesh from other angles too

Frankie Bridge’s skintight dress, which featured a long zip down the back, was paired with skyscraper stiletto heels for maximum impact.

Frankie Bridge also showcased her tattoo from the back

Frankie Bridge’s tattoo, “Sunshine ‘n’ Showers’, is a tribute to her late grandmother, who used to call her by that nickname.

Frankie Bridge posing outside the venue

Frankie Bridge, who overcame depression in her youth to become one of the most successful pop stars around, showcased her slimline waist in this edgy dress.

Mel C was another guest at the prestigious event

Ellie Goulding channeled a mermaid in her floor length dress

Ellie Goulding went all out at the Attitude Awards as she flaunted a mermaid outfit in shades of sea blue and green.