Meghan, Duchess of Sussex, had to do some last-minute curtsy practice before meeting the queen for the first time.

In her tell-all interview with Oprah Winfrey, the duchess described her first time meeting Queen Elizabeth II when she was dating Prince Harry, the monarch’s grandson. The big meeting happened at the Royal Lodge—where Prince Andrew, Sarah Ferguson, Duchess of York, Princess Eugenie, and Princess Beatrice are usually based—after the queen was finishing a church service in Windsor, she told Winfrey.

Meghan revealed that she chose not to research Harry and his family before meeting them, but that also meant she didn’t realize she would have to curtsy to the queen, even privately at home.

“Harry and I are in the car, and he says, ‘Okay, well, my grandmother says you’re going to meet her,'” she recalled. “I loved my grandmother, I used to take care of my grandma, this is great.” Then Harry asked her, “Do you know how to curtsy?”

Duchess Meghan explained that was the first time she realized the intensity of the situation she was walking into. “And that was really the first moment that the penny dropped that this wasn’t easy for me,” she said. 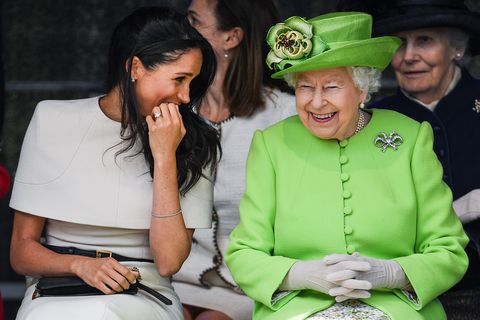 How does one curtsy to the queen? Winfrey asked. “Deeply, to show respect,” Meghan said, “And I learned it very quickly.”

They apparently did a few run-throughs before the meeting, “right in front of the house,” Meghan explained. When she did meet Her Majesty, Meghan apparently did a “very deep curtsy,” but she said that she doesn’t even remember the moment. “And then, we just sat there and we chatted, and it was lovely and easy,” she said.

Meghan added later that she has always had a good relationship with the sovereign. “The queen has always been wonderful to me,” she said.

They’ve had breakfast together, and the queen gave the duchess a set of pearl earrings and a matching necklace. When they had their first joint engagements together, the queen even offered to share her blanket with Meghan because it was chilly. “And it made me think of my grandmother,” the duchess said of the queen’s “warmth” and welcoming nature.

Horse racing tips: Huge 33-1 outsider can blast off from the front and make mockery of long odds