Long before Meghan Markle even married Prince Harry in 2018, the media, royal fanatics, and onlookers alike began comparing the Duchess of Sussex to the Duchess of Cambridge, Kate Middleton.

Style, attitude, and relationship with the rest of the royal family were just a few of the ways both commoners turned princesses were assessed. BuzzFeed News dissected how contrasting headlines on similar behaviors, untraditional acts, and fashion choices differed when it came to Meghan and Kate, signaling how such coverage may have prompted the former “Suits” actor and husband Harry to leave the royal family.

Yet, aside from the vast differences in press coverage between Kate and Meghan, Meghan’s entry into the royal family allowed for royal fanatics to obsess over a whole new princess. While both duchesses came from working families, and both were gifted engagement rings connected to the late Princess Diana’s own jewelry collection (via Livingly), fans were especially able to fawn over both women during their royal wedding days that had people all across the world tuning in on their small screens. Now, three years after Prince Harry and Meghan Markle’s wedding, a new study shows the former actor may have beat out Kate in a wedding popularity contest. 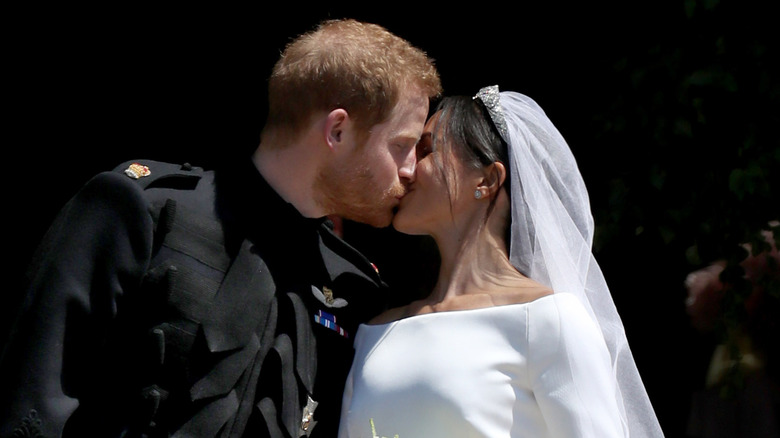 In a research report by Tatler, Meghan Markle’s wedding ensemble beat out her sister-in-law Kate Middleton’s dress in a wedding gown popularity contest. The outlet noted that, based on search results of celebrity wedding gowns, Meghan’s Givenchy wedding gown is the No.1 most searched celebrity wedding gown of the 2010-2020 decade, with Kate’s Alexander McQueen creation coming in second. Research shows just under 22,000 monthly internet users in the U.K. search for Meghan’s royal gown from her 2018 wedding to Prince Harry, while about 21,500 monthly users in the U.K. search for Kate’s dress from 2011.

According to People, Meghan’s silk Givenchy gown, designed by Claire Waight Keller, included a sculpted waist and open bateau neckline. The Duchess of Sussex’s “delicate, cathedral-length veil, made from silk tulle” also brought a piece of home to the U.K., as its trim featured 53 hand-embroidered flowers, one from each of the Commonwealth’s counties, plus one poppy representing the state of California, Meghan’s home state.

Following behind the two royal ladies are Hailey Bieber and Ariana Grande. Bieber wore a Virgil Abloh for Off-White gown with a somewhat controversial veil that read “till death do us part” in 2018, while Grande opted for a classic Vera Wang and her signature half-up, half-down up-do.