A shocking video shown at the second impeachment trial for Donald Trump shows former Vice President Mike Pence getting evacuated as rioters shouted at him.

Mike Pence, 61, was one of the many politicians who had to escape the MAGA mob that stormed the U.S. Capitol last month and now a new never-before-seen security video is showing the chaotic scene he had to endure. The Jan. 6 video was shown by managers from the Democratic Party at the second impeachment trial for Donald Trump, 74, on Feb. 10, and in it, the former vice president and some of his family members can be seen running out of the U.S. Senate chamber from an adjoining office and down a flight of stairs. Capitol Police Officer Eugene Goodman can also be seen on the opposite side of the Senate doors trying to lead the mob away at the same time.

During Pence’s escape, the mob could be heard shouting things like “hang Mike Pence” and “bring out Mike Pence”, as they stood just a few hundred feet from him at one point. Senator Mitt Romney, 73,  was also shown being directed away from the mob by Officer Goodman in another video from the newly released security footage. Shortly after it was shown, the senator admitted he didn’t know it was Officer Goodman who led him to safety at the time and also wasn’t aware how close the rioters were to him. 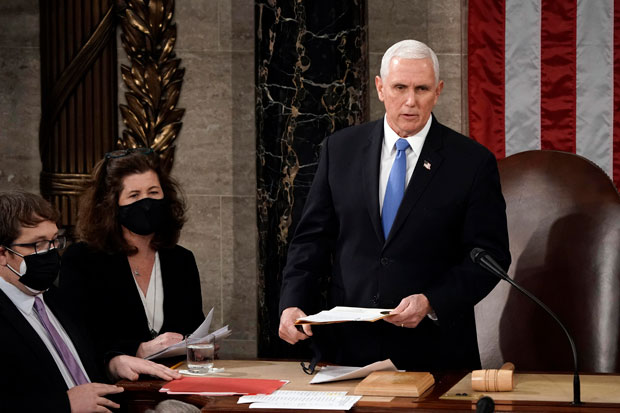 “It tears at your heart and brings tears to your eyes,” Senator Romney told reporters about the footage during a break in the impeachment trial, according to the Independent. “That was overwhelmingly distressing.”

The shocking surveillance videos were part of a video timeline the impeachment managers put together that showed the riot that happened as a joint session of Congress presided over by Pence set out to formally count the results of the 2020 presidential election. They also aired previously unreleased radio communication from Washington DC Metropolitan Police Officers calling for backup and stating there were “multiple law enforcement injuries” as rioters stormed the Capitol’s steps. 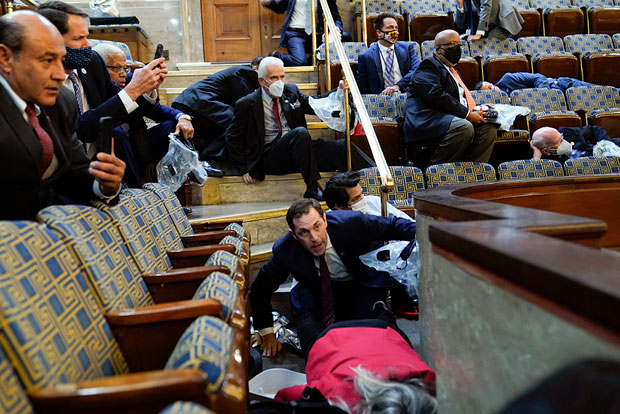 The riots on Jan. 6 happened after some of Trump’s supporters, who thought some of his votes in the 2020 presidential election were stolen, headed over to the the Capitol to show their anger over him not being re-elected. The large group were addressed by Trump himself during a speech in which he vowed to never concede to then President-elect Joe Biden shortly before they decided to mob the historical building.