‘What happiness looks like’: Nicola Peltz cosies up to husband Brooklyn Beckham as she hosts ‘magical’ 28th birthday party after girls’ spa day

Nicola Peltz cosied up to her husband Brooklyn Beckham as she celebrated her 28th birthday with friends and family on Monday.

The actress flashed her bra beneath a sheer black dress as she shared a photo dump to Instagram during a lavish party, after enjoying a girls’ spa day with her pals. 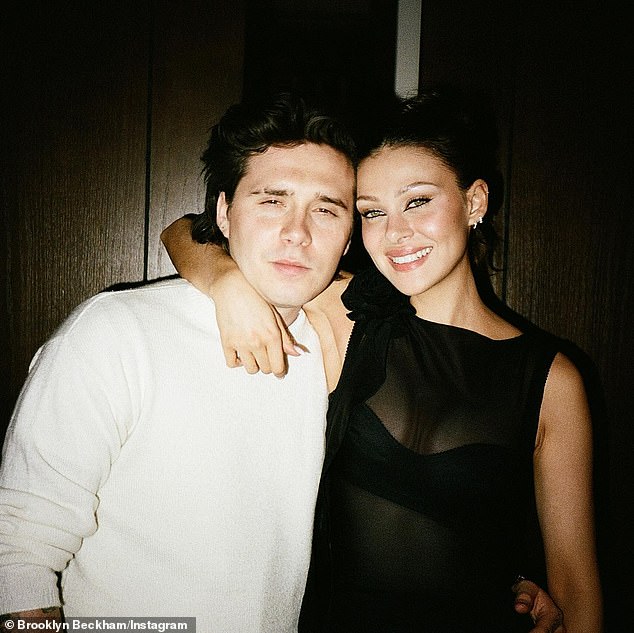 ‘What happiness looks like’: Nicola Peltz cosied up to her husband Brooklyn Beckham as she celebrated her 28th birthday with friends and family on Monday

Her new pal Selena Gomez, 30, was in attendance along with her sister Gracie, nine, as well as Nicola’s hairdresser, make-up artist and PR representatives.

In one caption, the Bates Motel star wrote: ‘What happiness looks like,’ while penning in another, ‘The most magical birthday spa day with my girlies.’

Brooklyn, 23, gushed in his own post: ‘Happy birthday to my better half xx I hope you had the most amazing birthday xx I love you more than anything xx.’

It comes after Brooklyn shared a selections of loved-up shots with Nicola as she turned 28. 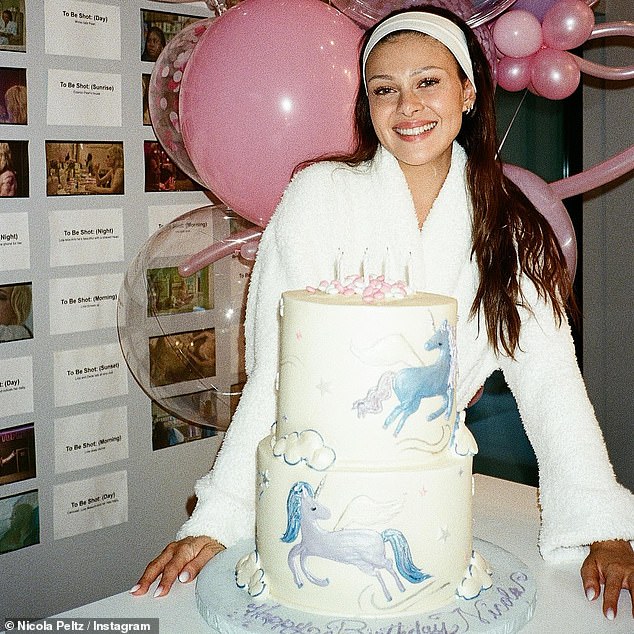 Celebration: She had earlier enjoyed a girls’ spa day with her pals 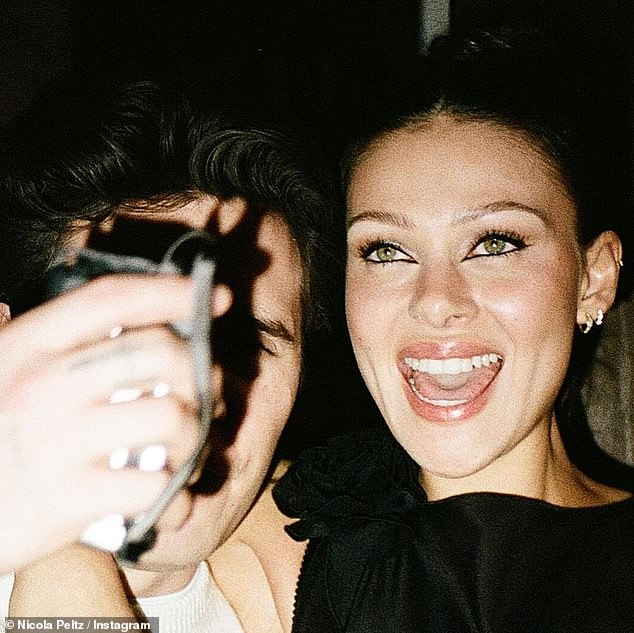 Dazzling: Nicola flashed her sparkling white teeth as she posed alongside Brooklyn 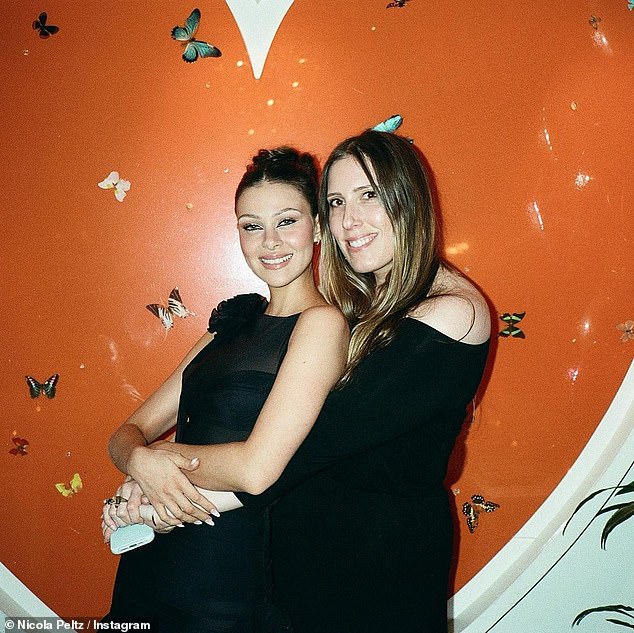 What a pair! Nicola was joined by her hairdresser, make-up artist and PR representatives

The aspiring chef took to Instagram to wish his partner a happy birthday by posting a sweet montage clip.

The couple looked incredible as they posed during a photoshoot on their wedding day, while Brooklyn admitted ‘he’s ‘still trying to figure out’ how he and Nicola are together.

In one snap, Brooklyn was seen planting a kiss on Nicola’s cheek while she had a towel wrapped around her in the bathroom of their home.

Alongside the sweet post, Brooklyn penned: ‘Happy birthday Nicola xx From the moment I laid my eyes on you I thought you were the most gorgeous girl I’ve ever seen and since then I’m still trying to figure out how your mine xx 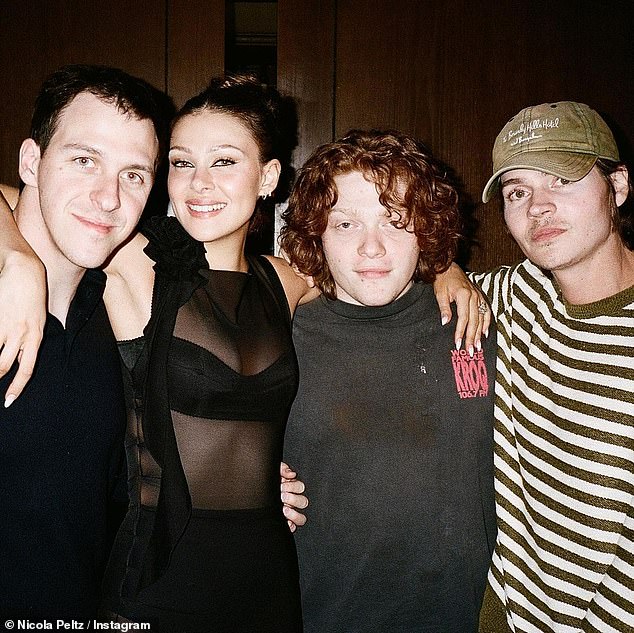 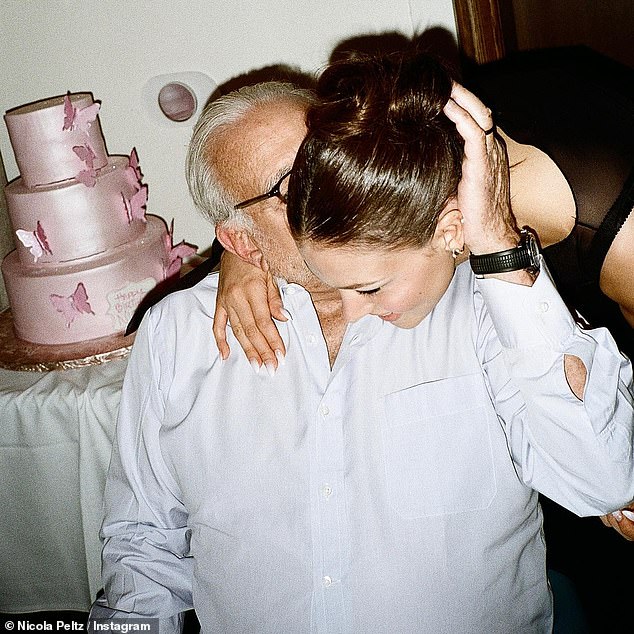 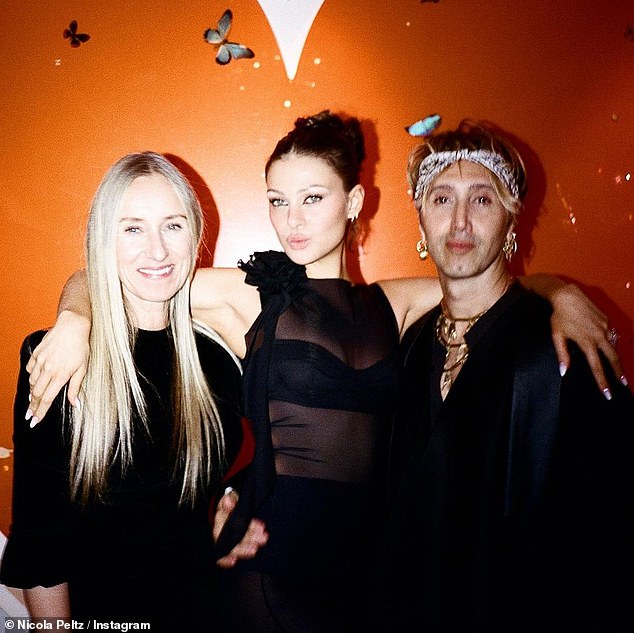 Hot stuff: The actress flashed her bra beneath a sheer black dress as she shared a photo dump to Instagram during a lavish party

Victoria and David Beckham shared an old snap of their daughter-in-law Nicola too.

The fashion designer, 48, wished her eldest son Brooklyn’s wife a happy birthday in the post as she penned: ‘Hope you have a lovely day’, and David wrote an almost identical message while sharing a snap of Nicola to his 76.9million followers.

It comes amid ongoing rumours of a feud between Nicola and Victoria, which were fueled over the festive season as Nicola and Brooklyn spent Christmas apart from the Beckhams while they celebrated respectively in the US and UK. 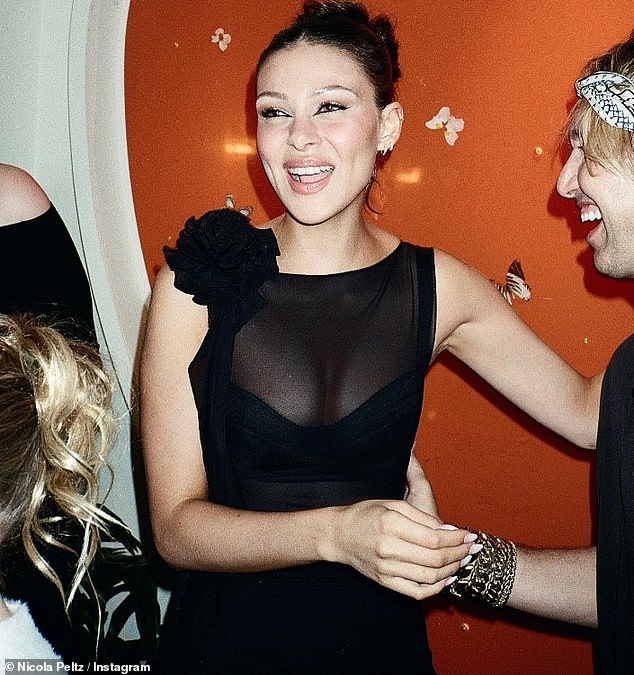 Out of this world: She never fails to look incredible 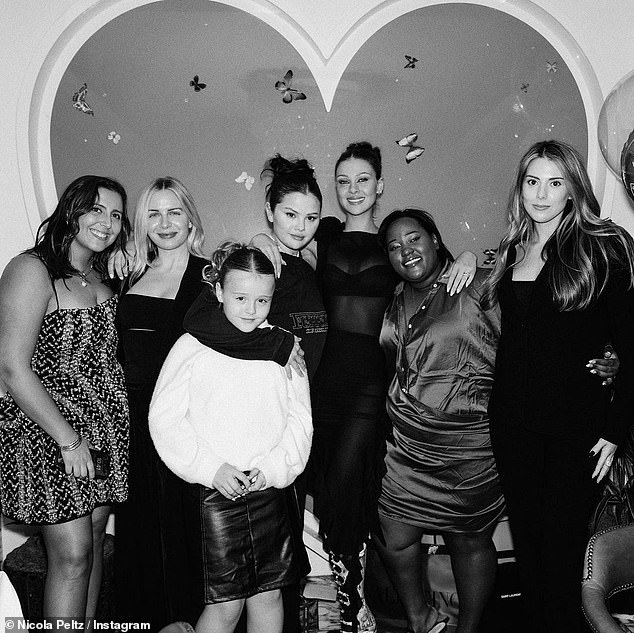 Star-studded: Her new pal Selena Gomez, 30, (centre) was in attendance along with her sister Gracie, nine

Overjoyed: In one caption, the Bates Motel star wrote: ‘What happiness looks like’

The candid picture showed Victoria and Nicola at a table as they enjoyed wine and food, with the heiress covering her mouth as Posh Spice flashed a look to the camera.

Nicola, who dyed her hair brunette last year, still has blonde locks in the snap and is wearing the same outfit she donned when Brooklyn proposed in 2020 – suggesting that the picture is from that day.

David shared a snap from that very same day and part of the kitchen, it seems, as Nicola playfully covered her face with a lettuce leaf at the table. 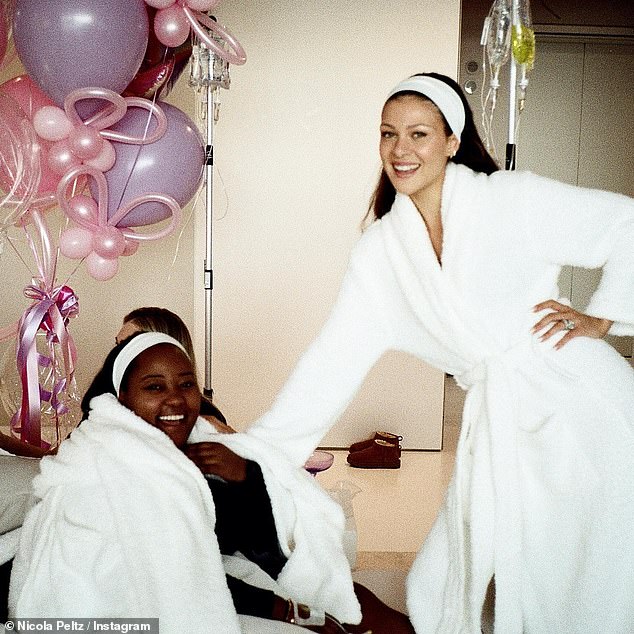 Buddies: Nicola was surrounded by her nearest and dearest during the spa day 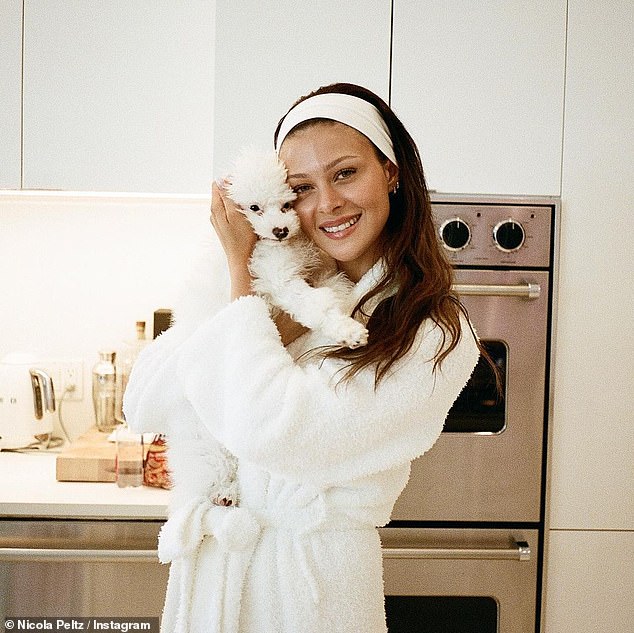 Furry friend: She picked up her dog named Lamb 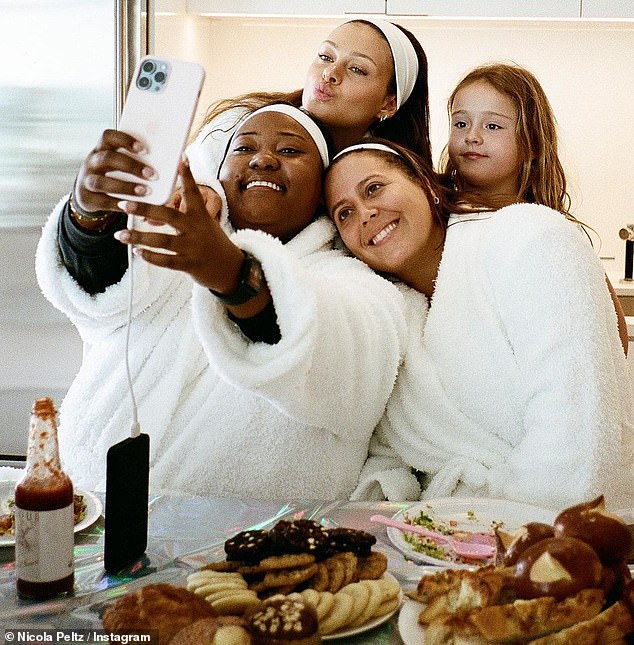 Crew: Her squad posed for a selfie in their robes

‘Happy Birthday have a lovely day,’ wrote the former footballer over the snap.

Nicola is celebrating the birthday at home in the US with Brooklyn, while the Beckhams remain in the UK.

The show of support comes amid a feud between the famous family and their son’s new wife, which began shortly after their 2022 nuptials – with reports that claimed Nicola and Victoria ‘can’t stand each other and don’t talk.’

The Beckhams refused to pay for Brooklyn’s US green card, a source claimed at the time and trouble had reportedly been brewing between their two houses. 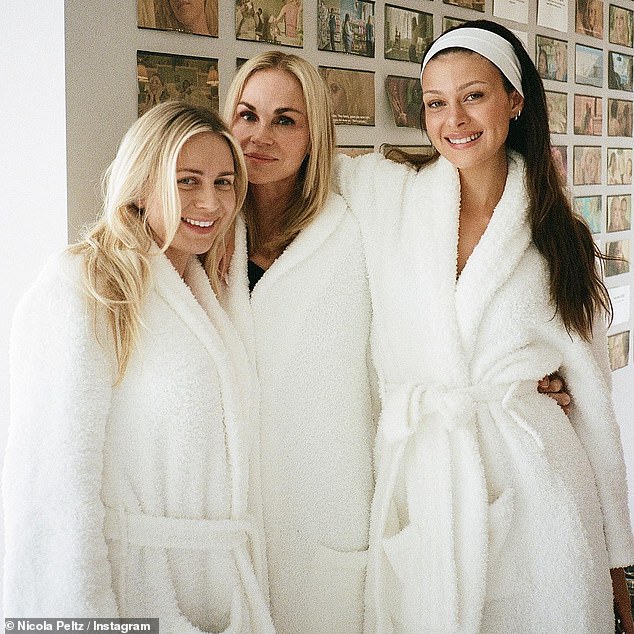 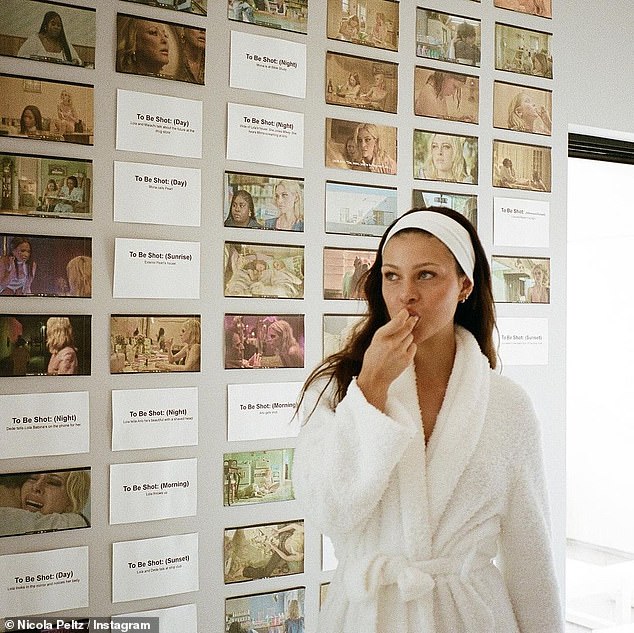 Yum! She munched on some tasty food

Having fun: Nicola penned in her caption: ‘The most magical birthday spa day with my girlies’

The birthday post is rare as Nicola and Victoria have scarcely liked each other’s pictures on social media, despite the fact that they used to always show support for one another online.

While Brooklyn and Nicola have not seen the Beckhams at all over the festive season, despite previously spending Christmas together.

Brooklyn ensured he was the first to wish wife Nicola a happy 28th birthday on Sunday evening, ahead of the actual day on Monday.

The son of Victoria and David shared a video to his Instagram Stories as he gushed that the heiress was ‘the woman who changed my life’. 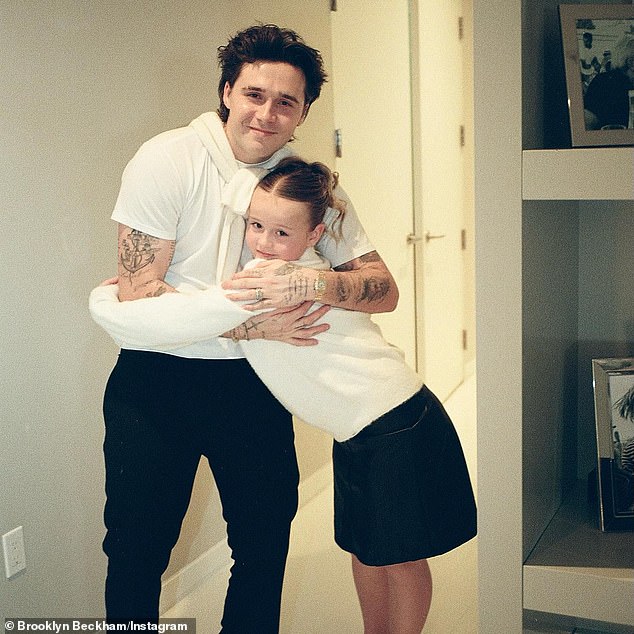 Adorable: Brooklyn, 23, gushed in his own post: ‘Happy birthday to my better half xx I hope you had the most amazing birthday xx I love you more than anything xx’

And to celebrate the big day, he also hosted her pals in a pink party full of cakes and sweet treats – donning an apron which read: ‘At your service, girls’.

Sharing a video of Nicola as she rocked pal Selena Gomez’s younger sister on her knee with his 14.7M followers, Brooklyn penned: ‘Happy early birthday to the woman that changed my life ❤️❤️

‘I love you so much baby and I am so lucky to be able to wake up to your gorgeous face every morning ❤️❤️❤️ Hope you have the most amazing birthday because you deserve the world ❤️❤️’.

His wife could be seen laughing with family in the video as she celebrated, with Brooklyn making sure he was the first to kick off the birthday wishes.

And celebrations are already in full swing, with Nicola welcoming a slew of pals to a party on Sunday.

The party was decked out with celebratory banners and balloons, as Nicola was given a two-tiered unicorn cake.

Sprinkled cupcakes, iced donuts, gummy sweets and chocolate bars all graced the decorated dining table – which Brooklyn proudly stood behind as he waited on her gal pals.

He also donned a baby pink apron which read: ‘At your service, girls’ while pushing his hair out of the way with a white headband, while the girls all relaxed in dressing gowns. 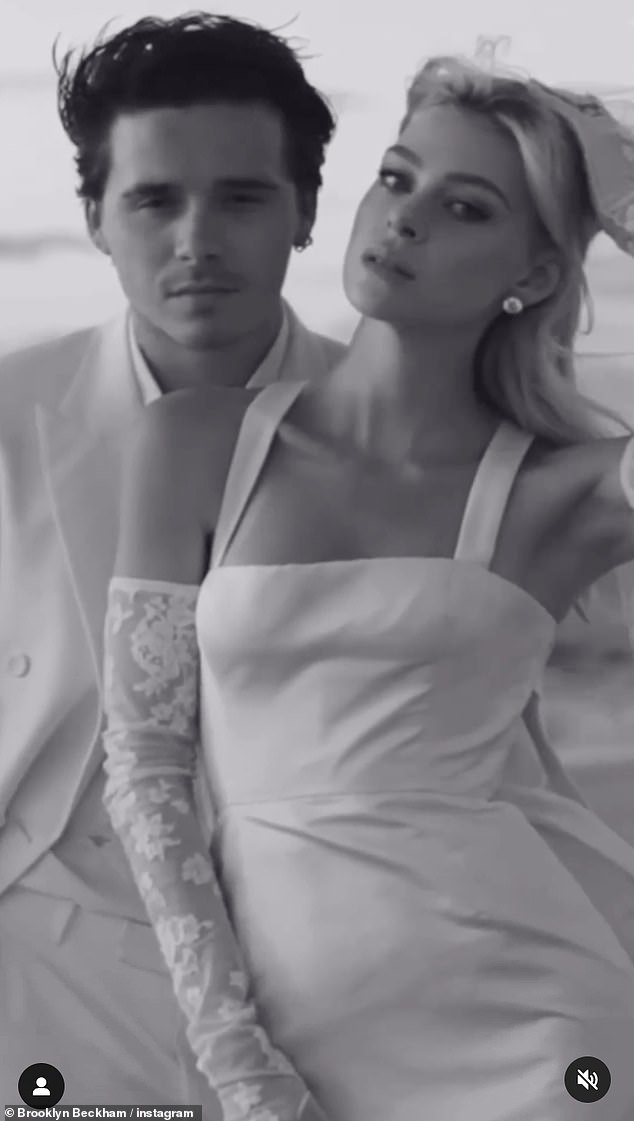 ‘I’m still trying to figure out how you’re mine’: It comes after Brooklyn shared a selections of loved-up shots with Nicola as she turned 28