Ever since Scott Disick and Kourtney Kardashian‘s five-year-old son Reign Disick got a mohawk haircut on Oct. 13, it would have been a serious fail if they had skipped the chance to dress their kiddo up as a punk rocker for Halloween. The big question is who else in the family had the right rock star attitude to go along with the precocious tyke. It turned out to be Kim Kardashian and Kanye West‘s daughter North West, 7, as she and Reign killed it in matching punk outfits.

With North’s great big personality and fierce lung power for screaming, she made the perfect cohort to be Reign’s partner in rock. Kourtney, 41, shared photos and several videos of the two dressed up in costume to her Instagram account on Oct. 30, writing “Rock ‘n Roll” in the caption. Fans were gushing in the comments about how Reign and North are the coolest and cutest cousins ever.

Reign had his first ever haircut in Aug. 2020, losing his waist length long locks. Ever since then, dad Scott trimmed back his growing in buzzcut into a mohawk, which was spiked high for his punk costume. He could be seen in a grey and black mesh shirt with army green pants and black boots. Reign was helped out in the accessories department with a spikey silver choker and bracelet, as well as a chunky shiny silver belt. 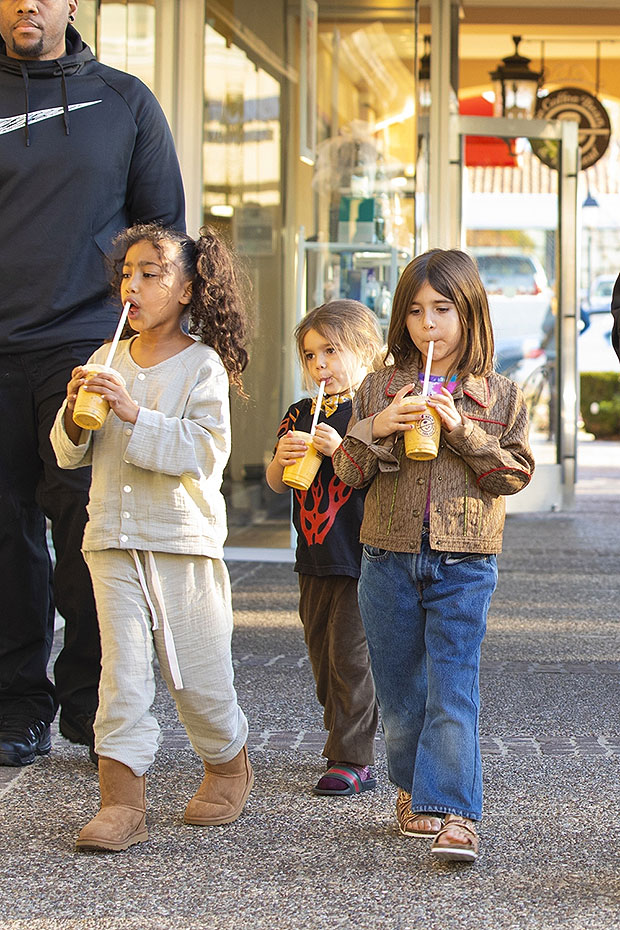 Reign fully embraced having punk makeup applied, as he was seen with smudged black eyes and black lipstick. He even threw up hand signs while holding a child-sized electric guitar in the photos with North. She too had on the same dark makeup, but got a big girl adult-sized axe.

North wore a black t-shirt honoring the late 70s-early 80s punk band The Misfits. The mini style star was on point with the rest of her costume, wearing a plaid mini-skirt, ripped black stockings, black boots and the same type of spikey silver necklace and bracelets that Reign donned.

In two videos, the kiddos were seen jumping up and down with their instruments, as Reign yelled “punk rocker!” North just plain screamed at the top of her lungs. The pair eventually threw up some serious hand signs to show that they meant business. With Halloween still one day away, we can’t wait to see if this is just a preview of one of the Kardashian cousins’ possible looks, or if these are the costumes North and Reign will wear for the sugary and spooky holiday.