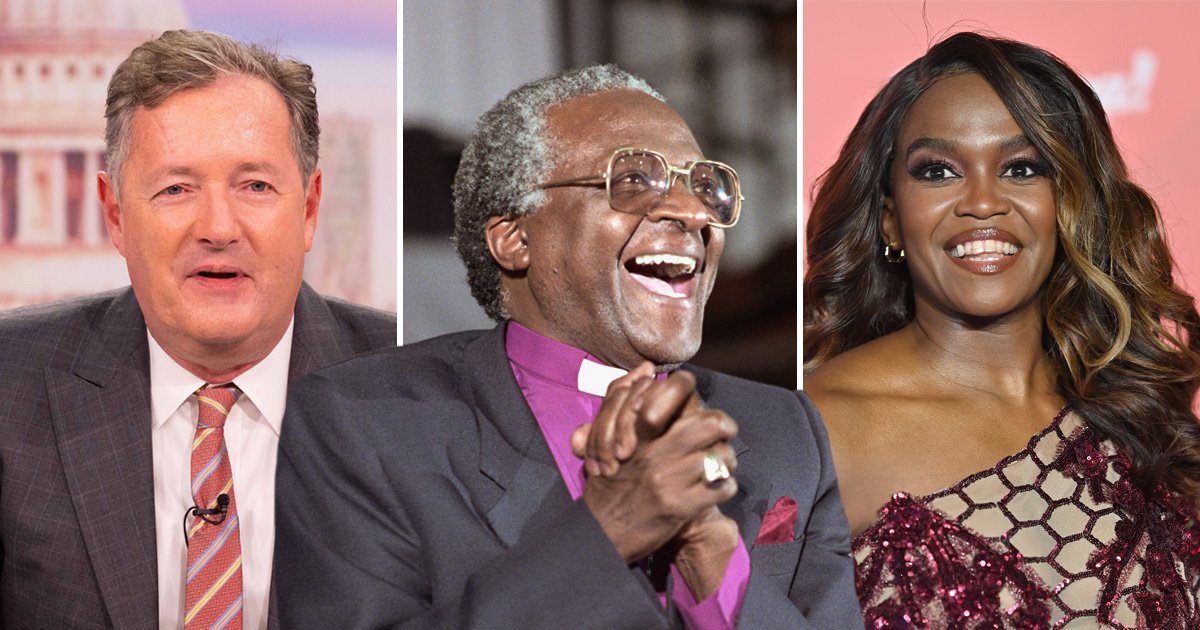 Tributes have poured in for Archbishop Desmond Tutu after his death.

The Nobel Peace Prize laureate, who was one of the main figures of South Africa’s anti-apartheid movement, died at the age of 90.

The Office of the Archbishop of South Africa issued a statement on behalf of his family, confirming the news – explaining that he ‘died peacefully at the Oasis Frail Care Centre in Cape Town this morning’.

Following the announcement, stars took to social media in force to offer their condolences and fondest memories.

‘The ones who stay in your mind and who fill your heart when you think of them. He is one of the few.’

She concluded the tweets: ‘Archbishop Desmond Tutu … thank you for all you’ve done with your life, and for your smile and your dancing, from a little Welsh girl you never knew but who thought you were amazing.’

Boy George added: ‘Happy to say I met Arch Bishop Desmond Tutu and he was indeed a beautiful soul who gave me faith that some humans do have a strong love frequency.

‘An amazing man, a powerful energy and one of God’s finest! R.I.P.’

Tutu was an outspoken critic against racial inequity, and won the Nobel Peace Prize in 1984 for his non-violent opposition to apartheid.

He witnessed the ends of that regime and later chaired a Truth and Reconciliation Commission in a bit to unearth atrocities committed during those dark days.

The retired Archbishop of Cape Town was diagnosed with prostate cancer in the late 1990s, and was hospitalised on several occasions in recent years to treat infections associated with his treatment.

His cause of death has not been made clear.

‘The passing of Archbishop Emeritus Desmond Tutu is another chapter of bereavement in our nation’s farewell to a generation of outstanding South Africans who have bequeathed us a liberated South Africa,’ President Cyril Ramaphosa said in a statement.

‘From the pavements of resistance in South Africa to the pulpits of the world’s great cathedrals and places of worship, and the prestigious setting of the Nobel Peace Prize ceremony, the Arch distinguished himself as a non-sectarian, inclusive champion of universal human rights.

‘Ultimately, at the age of 90, he died peacefully at the Oasis Frail Care Centre in Cape Town this morning,’ Dr Ramphela Mamphele, acting chairperson of the Archbishop Desmond Tutu IP Trust and coordinator of the Office of the Archbishop, added in a separate statement.

‘Courageous, gracious, and concerned for the welfare of others to the very end.

’As Mrs Tutu says, although he was not physically imposing, he had the inner strength of a lion.’