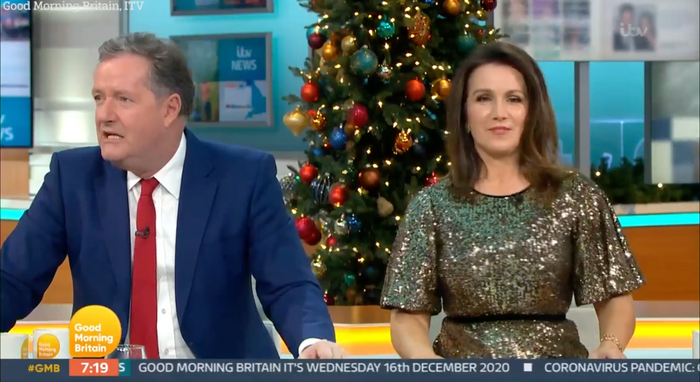 Piers Morgan was caught screaming at the camera crew of ITV's "Good Morning Britain" in a planned spoof of Tom Cruise's leaked COVID-19 rant from the set of "Mission: Impossible 7."

During the breakfast show's broadcast on Wednesday morning, Morgan can be seen directly after a commercial break impersonating Cruise by shouting at his staff members in a clip shared by The Independent.

The 55-year-old presenter then quickly explained that he was mocking Cruise's "extraordinary leaked tape" and wished the Hollywood star "good luck" because film crews are a "vengeful bunch."

"They can take down anyone in this business so I wish Tom Cruise all the best," Morgan said.

Leaked audio published by The Sun on Tuesday captures Tom Cruise screaming at members of his "Mission Impossible" crew on the Warner Bros. lot in Hertfordshire, England, after discovering certain members broke strict coronavirus rules by standing too close to each other at a computer monitor.

During the explicit rant, Cruise can be heard calling the crew members 'motherf—ers' and warned if he sees them breaking the rules again "you're f—ing gone."

"No apologies," Cruise says during the audio. "You can tell it to the people that are losing their f—ing homes because our industry is shut down. It's not going to put food on their table or pay for their college education."

He continues: "I'm on the phone with every f—ing studio at night, insurance companies, producers, and they're looking at us and using us to make their movies. We are creating thousands of jobs you motherf—ers. "We are not shutting this f—ing movie down!"

Two sources close to the production confirmed to Variety that it was Cruise's voice on the recording.