Home » Celebrities » Six Months Later, No One Can Top 'The Box'

Nothing has come close to “The Box.”

Roddy Ricch’s squeaky, sticky surprise hit dominated the first half of 2020, topping the list of the biggest songs in the U.S. from  January through June by a hefty margin.

After it reached Number One on the Rolling Stone Top 100 Songs Chart in the first week of 2020, it stayed there for 11 non-consecutive weeks, ushering us into a new decade with a hook  that sounded like a faulty windshield wiper. Despite being the rather unexpected star of Please Excuse Me For Being Antisocial, “The Box” managed to hold off competition from hip-hop heavyweights Drake and Future, as well as pop&B superstar Justin Bieber.

Since the song dropped out of the top spot in March, no other hit has dominated the RS 100 quite like it since. Apart from DaBaby’s “Rockstar” — which features Roddy Ricch and is currently in its sixth straight week atop the RS 100 — the Number One spot has been a parade of short-lived Number Ones that didn’t quite stick like “The Box.”

By Alpha Data’s tally, the track has pulled in 4.7 million song units so far this year, clobbering the Number Two song, Drake and Future’s “Life Is Good,” by 1.6 million units. Song units are a combination of audio streams and song sales and do not include passive listening like terrestrial radio or digital radio. The list covers the tracking period from January 3rd through July 2nd, 2020. 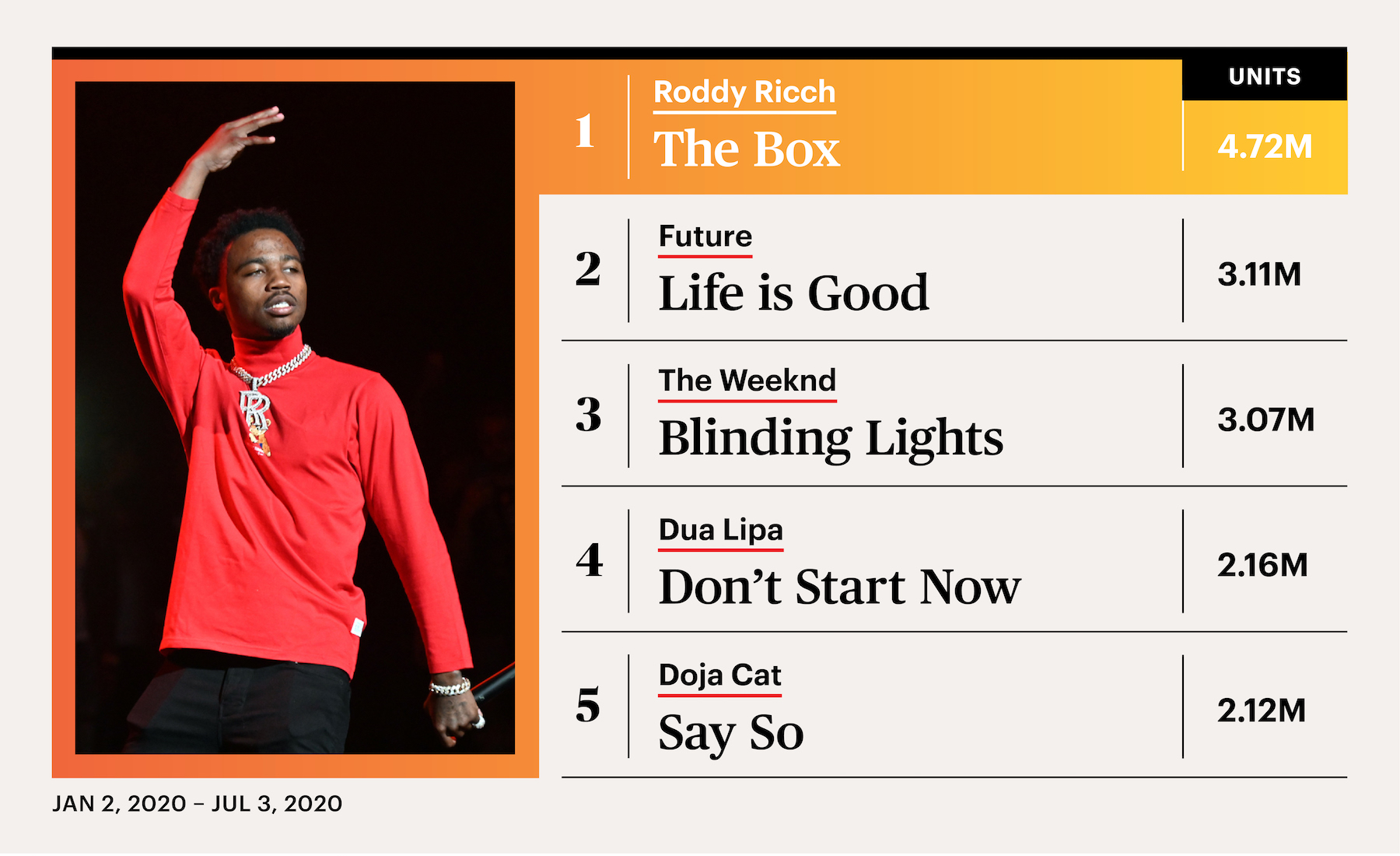 The Weeknd’s “Blinding Lights” takes third in the mid-year tally with 3.1 million units, with Dua Lipa’s “Don’t Start Now” and Doja Cat’s “Say So,” rounding out the top five and confirming that disco is, emphatically, back. Both songs paved the way for the artists’ highest positions so far on the RS 100: With a remix featuring Nicki Minaj, “Say So” reached Number Two on the chart in May while “Don’t Start Now” peaked at Number Three.

Megan Thee Stallion’s “Savage,” which includes the remix featuring Beyonce, takes Number Six with just under 2.1 million units. It’s the Houston rapper’s second track to go Number One on the RS 100 after the reign of “Hot Girl Summer” in 2019. Post Malone’s “Circles,” which was among the top songs of 2019, sticks around at Number 7, while Australian singer Tones and took eight with her breakout single “Dance Monkey.”

Overall, Roddy Ricch has three appearances in the mid-year Top 10.  With just under 2 million units, DaBaby’s “Rockstar” takes ninth, while “High Fashion,” another track off Please Excuse Me For Being Antisocial, comes in 10th.