Home » Celebrities » The stage is set for a year to remember

The stage is set for a year to remember: PATRICK MARMION previews what is in store at theatres across London and UK for 2020

Theatres across London and UK

Verdict: The going is good to great

Stars: Still in their eyes 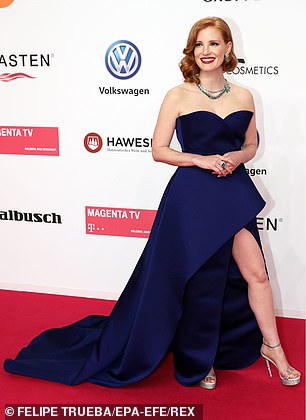 What a fine set of theatrical contenders we have lining up this year! Whether it’s musicals, new plays, adaptations, revived classics or classic revivals, 2020 is as packed with thoroughbreds as the paddock at Aintree.

You want stars? We got stars! After his critically acclaimed Cyrano de Bergerac with James McAvoy, Jamie Lloyd moves on to direct Game Of Thrones’s ‘Mother of Dragons’ Emilia Clarke in The Seagull, Anton Chekhov’s tale of unrequited young love at London’s Playhouse Theatre (from March 11 to May 30, theplayhousetheatre.co.uk).

Two of the biggest names, though, will be Jennifer Saunders and Whoopi Goldberg. Saunders is appearing twice — first in a repeat of last year’s fabulous turn as batty clairvoyant Madame Arcati in Noel Coward’s Blithe Spirit (touring from January 22, and at Duke of York’s, London, from March 5 until April 11, atgtickets.com).

She then returns as Mother Superior, opposite the indomitable Goldberg, who once more stars as Deloris Van Cartier in the stage musical version of 1990s hit film Sister Act (Hammersmith’s Eventim Apollo, July 29 to August 30, sisteractthemusical.co.uk).

If musicals are your thing, you’re in luck. Savour the prospect of big-screen heartthrob Jake Gyllenhaal tackling one of Stephen Sondheim’s most hypnotic and demanding scores, Sunday In The Park With George, inspired by Georges Seurat’s painting of the Ile de la Jatte on Paris’s River Seine in 1884 (Savoy Theatre, London, from June 11 to September 5, sundayinthepark.co.uk). 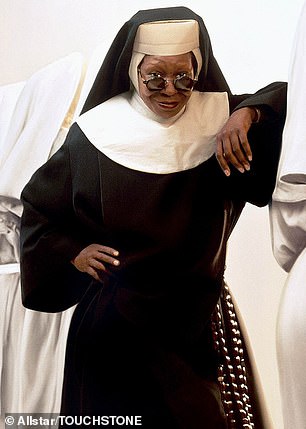 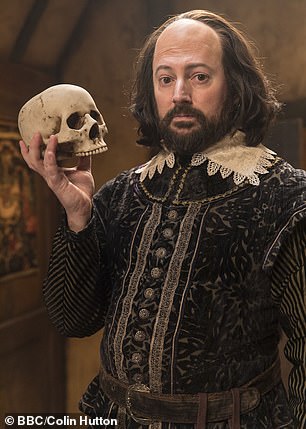 Ben Elton’s stage take on his Shakespeare TV sitcom Upstart Crow which, like the show, will feature David Mitchell (right) as the beleaguered Bard and Whoopi Goldberg (left) will appear in Sister Act

But perhaps the biggest draw next year, in the musical world, will be Disney’s Frozen, directed by Michael Grandage, which reopens the Drury Lane theatre after a multi- million pound makeover. Samantha Barks will play Elsa — and get to sing the tune that’s tormented millions of parents: Let It Go! (Theatre Royal, Drury Lane, London from the end of October, frozenthemusical.co.uk).

Watch out, too, for Rosalie Craig, Hadley Fraser, Rebecca Trehearn and Vanessa Williams (star of Ugly Betty and Desperate Housewives) in the return of the Donmar Warehouse’s 2014 production of City Of Angels, Cy Coleman’s musical homage to the golden age of LA noir (Garrick Theatre from March 5, cityof angelsmusical.co.uk).

There’s a new musical staging of Back To The Future, starring Olly Dobson in the Michael J. Fox time-travelling role (Manchester Opera House, February 20 to May 17, ahead of a West End transfer, backtothefuturemusical.com).

For serious drama, there’s Aaron Sorkin’s adaptation of To Kill A Mockingbird, Harper Lee’s tale of racial injustice in the 1930s. Rhys Ifans will take the lead role of small town lawyer Atticus Finch (Gielgud Theatre, London from May 21, tokillamockingbird.co.uk). 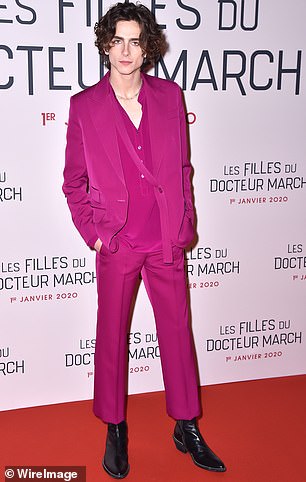 Two new works worth keeping an eye on are the latest from Tom Stoppard, Leopoldstadt (starring Tom’s son Ed): a story of a Jewish family starting over in Vienna in the 1900s (Wyndham’s Theatre, London from January 25, leopoldstadtplay.com). And, on a (much) lighter note, Ben Elton’s stage take on his Shakespeare TV sitcom Upstart Crow which, like the show, will feature David Mitchell as the beleaguered Bard. (Gielgud Theatre, February 7-April 25, upstartcrowthecomedy.com).

Finally, a pair of contenders from the National Theatre. The Visit, featuring Lesley Manville and Aussie actor Hugo Weaving (The Lord Of The Rings), is Tony Kushner’s U.S. version of Friedrich Durrenmatt’s Swiss drama about a super-rich woman returning to her home town hellbent on revenge (from January 31, nationaltheatre.org.uk).

Canadian Robert Lepage’s seven-hour epic The Seven Streams Of The River Ota, about the legacy of Hiroshima, must surely be seen as a long shot. But this was one of the most inventive and ambitious shows ever seen in this country when staged here in 1996. So it’s worth a punt.

Credit to playwright Gurpreet Kaur Bhatti: she’s certainly not afraid to tackle big issues. Here, that means the whole, fraught question of multi-culturalism and the social conflict it sometimes fosters. And Bhatti has a record with this kind of work, having seen her play Behzti (Dishonour) shut down by Sikhs protesting at its representation of their community when it opened at Birmingham Rep back in 2004.

In this new piece she focuses on a mixed, working class community in London, popping in and out of the council flat rented by Nic and Gary — a couple who’ve been together since school. Gary is a black heating engineer, hoping for promotion in a white-run servicing business. Nic is a white barmaid, desperate for her kids to get a good education. One of her friends is a Muslim mum who’s hothousing her own children. Nic’s husband Gary isn’t sure about the wisdom of that plan of action.

Fascinating as much of this is, the play is frustratingly diffuse. My hope was for a drama that really took modern Britain to task, in the way that playwright Arthur Miller anatomised post-war America in plays like All My Sons. Yes, that’s a big ask, but this is the Royal Court, flagship of new writing in this country. The question of race is particularly incendiary — and if Bhatti suspects there may be a racist conspiracy in British cultural life, then I’d like to see her flesh it out more rigorously.

Even so, there are some engaging performances here: Richie Campbell, as the honourable Gary, who becomes ever more lost and confused as the action plays out. And Amy Morgan, in a chilling turn as his boss, who’s blind to her racist stereotyping.

But it’s Claire-Louise Cordwell who’s the revelation of Michael Buffong’s claustrophobic production. Her Nic is fierce and tough, but also anxious and insecure. Bhatti should have made her struggle the driving force of the play, and really rubbed our noses in it.

Verdict: The title says it all

Here are two shows, still running from last year, that I won’t miss. One was a revival of John Webster’s The Duchess Of Malfi — a Jacobean sex and gore fest beloved of acting students itching to let off steam. When it works, it’s wicked fun. When it doesn’t (like here), it’s a three-hour bore.

First, there’s Webster’s labyrinthine syntax, which makes Shakespeare sound like Pinter at his most monosyllabic.

Then, there’s the bleakly whimsical plot, which sets up the elaborate persecution of an Italian Duchess who presses her steward into marrying her — only to be hunted down and killed by her incestuous brother.

I was far from sure, in Rebecca Frecknall’s mirthless production, if the actors understood what they were saying. I certainly couldn’t fathom what Lydia Wilson’s titular Duchess saw in Khalid Abdalla’s man-mouse of a house-husband (or vice versa).

The devil, as ever, has the best tunes; but the terrific Leo Bill (from Netflix hit Chernobyl) takes his Machiavellian moral mercenary on a meagre journey of woke enlightenment.

By the end, when Jack Riddiford as the Duchess’s twisted brother was writhing like a wolf and pressing himself against the rear wall, meaning had left the building…and I was keen to follow.

Another play I’d rather forget is Teenage Dick, Mike Lew’s delinquent take on Shakespeare’s Richard III, set in a modern American high school. The best thing about it is the acting — including an energetic Daniel Monks as the disabled anti-hero, who suffers from hemiplegia (a weakness or paralysis in one side of the body).

In lieu of Richard III’s ambition to become King, there is an excruciatingly predictable competition to become school President. All the clichés of high school movies are rolled out, and the dialogue is Bard lite peppered with genitally fixated insults, in a sort of blizzard of schlock, bile and iambic pentameter.

As the school babe, Siena Kelly is gutsy and smart (not to mention a spinning-top of a dancer). But Lew’s story has her collapsing into facile feminism once she renounces her status as a plot device and sends the puerile comedy spinning into toe-curling tragedy.

Chloe Lamford’s set is an ugly sports hall with posters falling off the walls.

Like the Royal Court, this theatre used to have a reputation for high-spec new work, but director Michael Longhurst is in danger of blowing that. We all want to support diversity and inclusion, but half-baked adolescent attitudinising is not the way to do it.