Home » Celebrities » These Tweets Comparing ‘Fate: The Winx Saga’ To ‘Winx Club’ Are A Mixed Bag

Netflix is no stranger to creating darker, grittier versions of beloved TV shows; after all, Chilling Adventures of Sabrina was a major hit. Now, the streaming service is putting an edgy spin on another popular series with Fate: The Winx Saga, a teen drama based on the much more colorful children’s cartoon, Winx Club. The new live-action adaptation hit Netflix on Jan. 22, and longtime fans already have strong feelings about it, at least according to these tweets comparing Fate: The Winx Saga to Winx Club.

Both shows take place at a magical boarding school for fairies called Alfea, as a group of girls learn to master their powers. While the original Winx Club is a 2000s Italian animated series geared toward teaching kids important lessons about friendship and self-discovery, Netflix’s new take features some steamy moments and terrifying villains that aren’t exactly family-friendly.

Winx Club fans were skeptical of the Netflix adaptation from the start. When the show’s trailer premiered on Dec. 10, 2020, there was near-instant backlash from some fans who accused the new show of "whitewashing" the cast — specifically when it came to the characters Musa and Flora (the latter of whom was replaced by a white fairy named Terra in the new series). 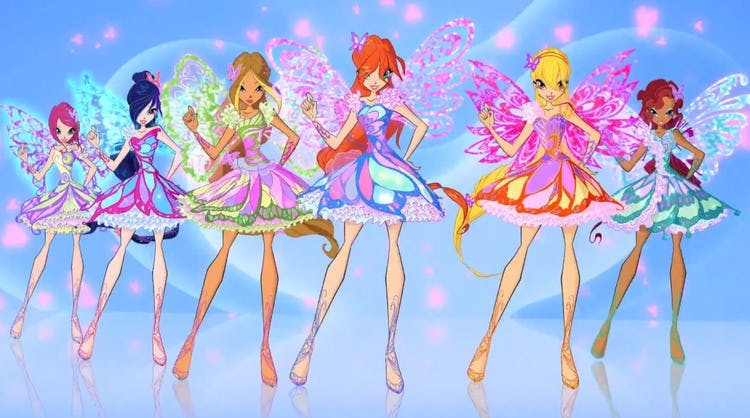 The critiques continued when Season 1 of Fate: The Winx Saga hit Netflix. Many fans took to Twitter to criticize its many changes from its source material. Chief among the concerns were the exclusion of several beloved characters, as well as the Winx Saga creators’ decision to remove the Winx girls’ signature fairy wings.

Many fans were particularly disappointed that Flora, a fairy of nature who was one of the founders of the Winx Club in the original series, was excluded from the show and only casually referenced by her cousin, Terra.

However, while many viewers were bothered by the some of the major changes in Fate: The Winx Saga, others found it plenty magical on its own.

It’s not just fans; critics are split on the show too. It currently sits at 50% on Rotten Tomatoes, with io9 critic Beth Elderkin writing, "Can you really turn a fairy show for preschoolers into a sexy teen drama? All wings point to no."

In contrast, Polygon’s Petrana Radulovic argued that "while the characters and their relationships suffer, Fate: The Winx Saga does create a compelling, nuanced plot."

No matter what your history with Winx Club is, you can form your own opinions on Fate: The Winx Saga Season 1, which is streaming on Netflix now.