If you’re invested in Khloé Kardashian and Tristan Thompson’s relationship drama, you definitely took notice of the fact Kardashian seemingly unfollowed him last week. The drama didn’t end there, though — several other members of the Kardashian crew also unfollowed the Cleveland Cavaliers player on Nov. 13, seemingly signaling that not all was peaceful between the two parties. Now, fans have been presented with a shocking twist: Tristan Thompson’s gift for Khloé Kardashian after she unfollowed him is definitely a smooth move. Still, it doesn’t answer many fans’ questions as to why she broke their mutual.

When Kardashian unfollowed Thompson, fans speculated it was due to Larsa Pippen’s claim that she had dated Thompson before Kardashian, which sparked a lot of chatter online. But there’s still no official comment on the situation from Kardashian herself.

Fast-forward to Nov. 15, and Kardashian nabbed a win in the Reality TV Star category for a third year in a row at the People’s Choice Awards. It seems like Thompson took it as a chance to send over a gift, and fans are convinced it was in an effort to make nice after she unfollowed him.

Pink and ivory roses sparkled behind her daughter, True, in a video clip posted to Kardashian’s Instagram on Nov. 16. "Did I get flowers from your daddy?" Kardashian asks True from behind the camera, captioning the video with a quick "Thank you" and tagging Thompson’s IG handle.

It’s not exactly a family reunion, but it showed fans that there wasn’t (much) bad blood between the former couple — a welcome change from the usual drama that plagues them. 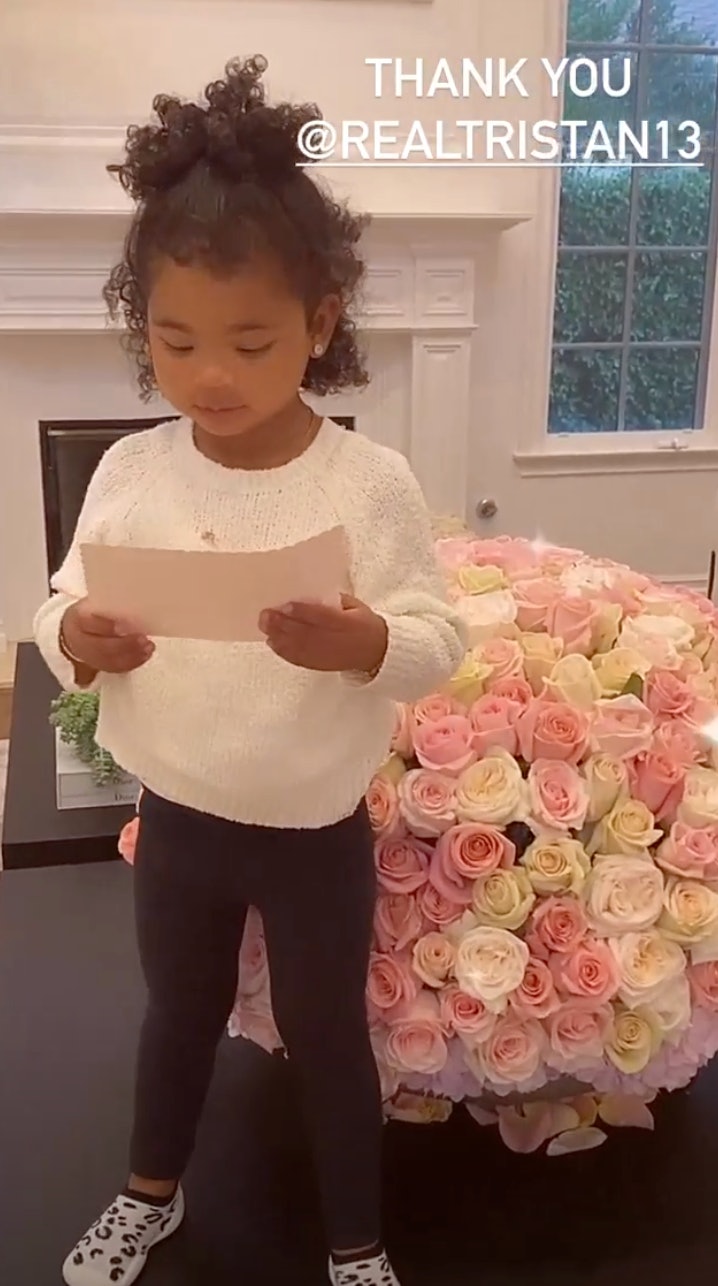 True looked excited to share the gift with her mom, happily holding a note from Thompson in her hands.

Thompson and Kardashian are co-parenting True at the moment, although there is still speculation out there that the pair is back together. The official unfollow from Kardashian and her sisters, Kendall and Kylie Jenner, signals the contrary, though, which makes the bouquet she received all the more intriguing. Regardless, don’t you wish you got a present every time you unfollowed an ex on Instagram?