The ‘High School Musical’ actor has been trending on Twitter as people believe his face looks ‘different’ in a new video call on Facebook Watch for Earth Day.

AceShowbiz –Zac Efron has sent the internet into a frenzy with his latest facial appearance. After the “High School Musical” star made a brief appearance in a new video call on Facebook Watch to celebrate Earth Day, fans could not help but weigh in on his “new face.”

The 33-year-old hunk participated in Bill Nye‘s “Earth Day! The Musical” video on Thursday, April 22 joining the likes of Justin Bieber and Dixie D’Amelio. “A big budget musical spectacular? Bill, wow,” he said in the clip. “I knew you were smart, but I think you’re a genius.”

The clip was quick to make its round on Twitter. It prompted one user to compare Zac to The Weeknd from “Save Your Tears” music video. The user noted, “Zac efron is very much giving the weeknd on save your tears.” Another echoed, “Zac efron was way toooo inspired by the weekends face shape.” A third chimed in, “Holy s**t I can’t believe Zac Efron is Handsome Squidward.”

The debacle continued with one tweeting, “I refuse to believe this is Zac Efron’s face now…….. yo who did that.” Someone else argued, “zac efron is only 33, he literally has been one of hollywoods hotties for years…..why did he ruin his face like that.” 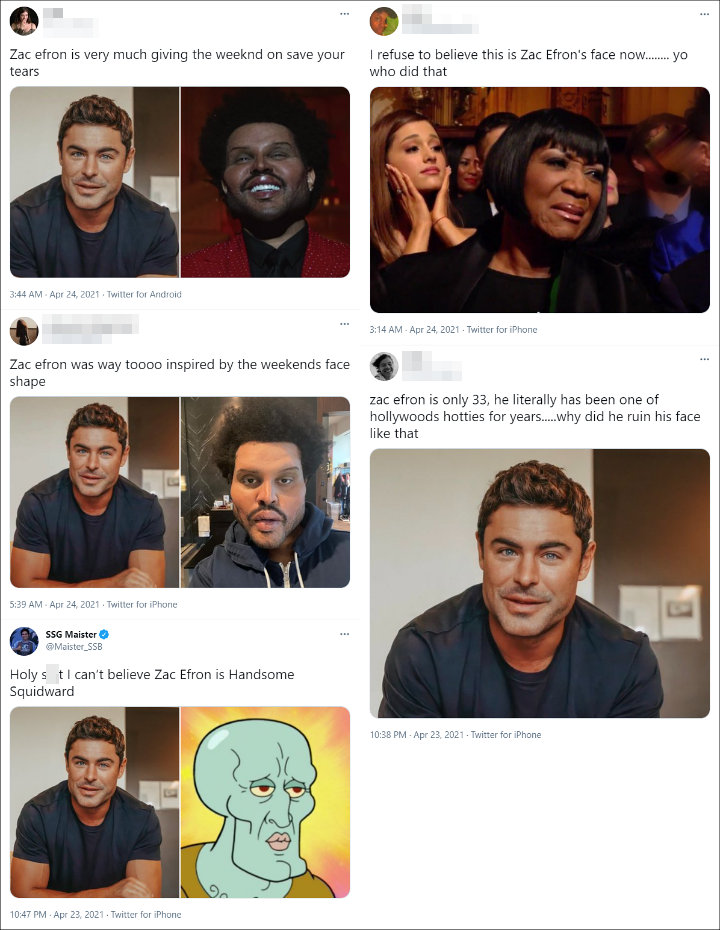 Some others, meanwhile, defended “The Greatest Showman” actor. An individual raged, “how are u an activist for body positivity and self love but are dragging zac efron over his new face? yall dont know wtf these ppl struggle with off camera.” Another person added, “everyone making fun of Zac Efron’s face… you think you are the comic relief in the movie but you are actually the villain.”

This was not the first time Zac surprised his fans with his appearance. In July 2020, many on Twitter addressed his huskier look on Netflix series “Down to Earth with Zac Efron“. One user raved at that time, “Yes! Daddy Zac Efron is the twist 2020 needed.” Another one gushed, “Zac Efron has turned into a total Daddy and I’m here for it. Dad bods get me hot.”