A BRIDE-TO-BE was left devastated after she ordered a peacock-themed wedding cake that arrived looking like a "lopsided turkey with leprosy".

Rena Davis, from Georgia in the US, had ordered her perfect wedding cake after showing the baker an image of a similar one she had found online. 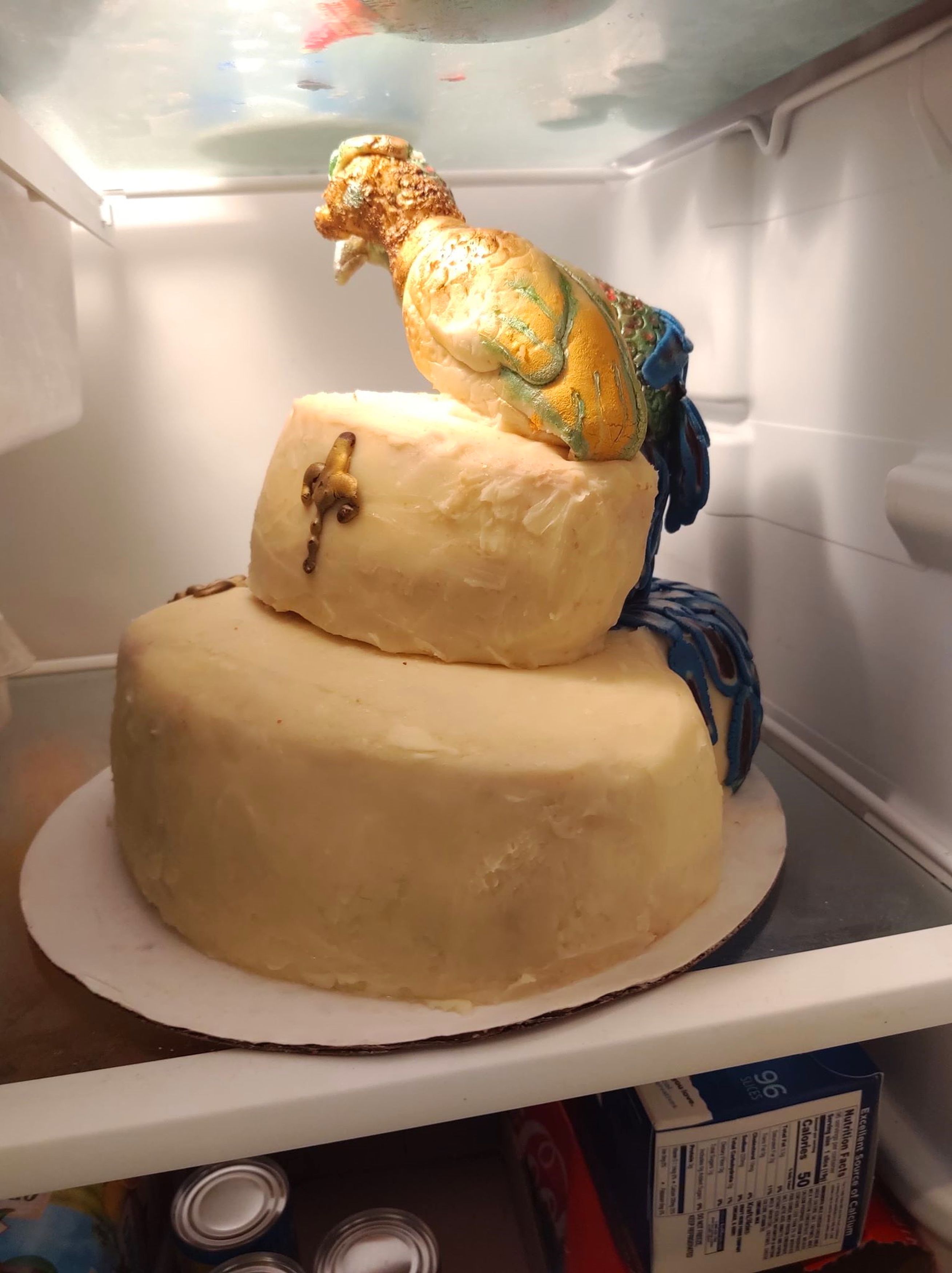 The unusual design was supposed to feature two birds, a heart-shaped sponge and chocolate cupcakes.

But what arrived was in stark contrast, with the peacock's head falling off the "lopsided" sponge.

Rena was utterly heartbroken, after forking out $300 (almost £250) for the cake a month before the big day.

And despite being reassured everything was "going to plan" in the weeks leading up to the wedding, the cake arrived the night before and was nothing like what the 52-year-old imagined. 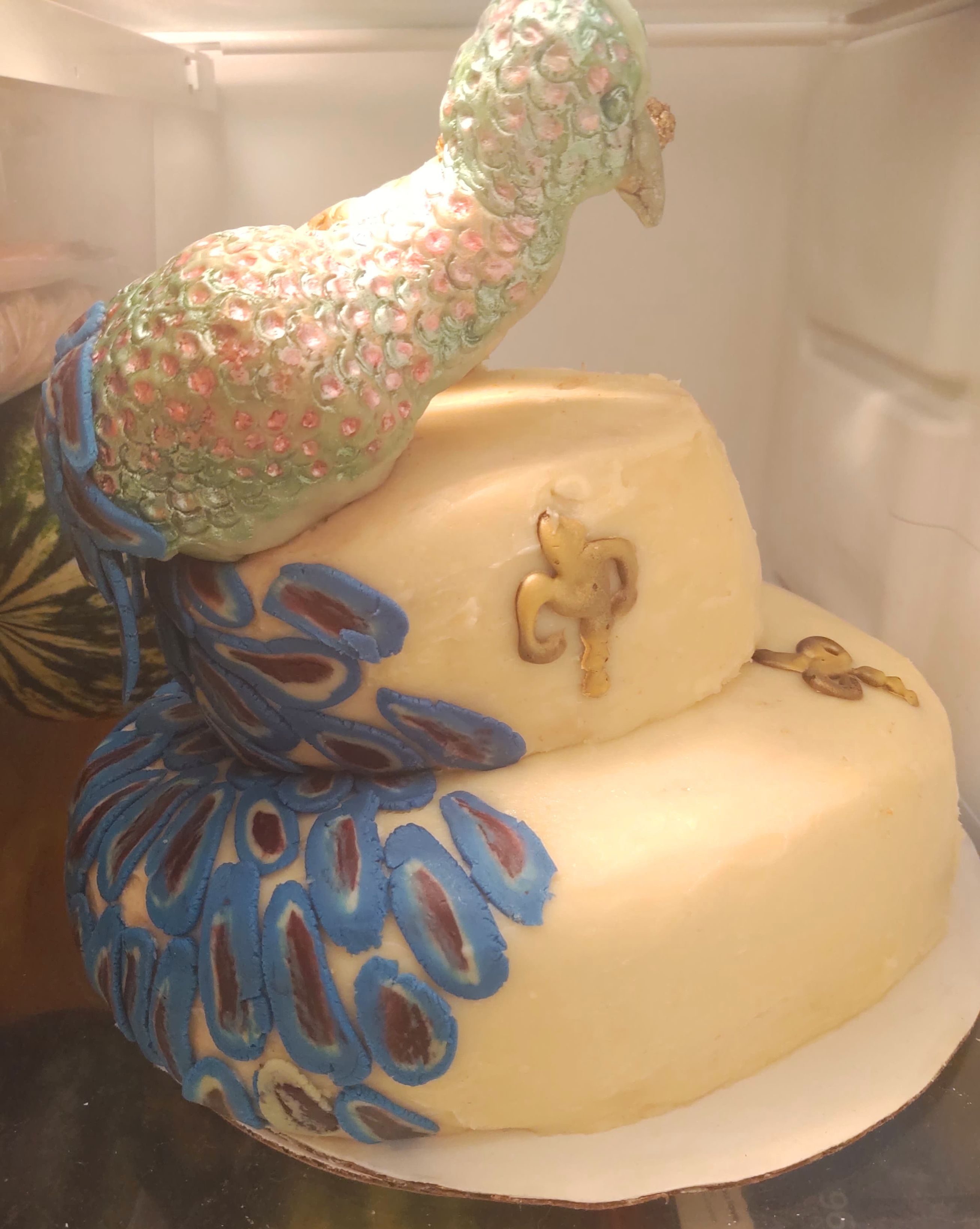 Just as the baker drove away, the peacock's head reportedly fell off and Rena realised the fondant icing was actually buttercream.

Despite chasing for a refund, Rena claims she was initially refused, but after sharing her ordeal on social media, she received an envelope in her letterbox including $300 (£242).

"I felt heartbroken. I saw [the cake] and walked out of the room," she explained.

"[Before], we'd heard nothing from her since. She had not called or anything.

"The only reason she gave a refund now was because of the viral post.

"She said she couldn't give me my money back at first because she had 50 hours in it and she had to pay her mum for helping." 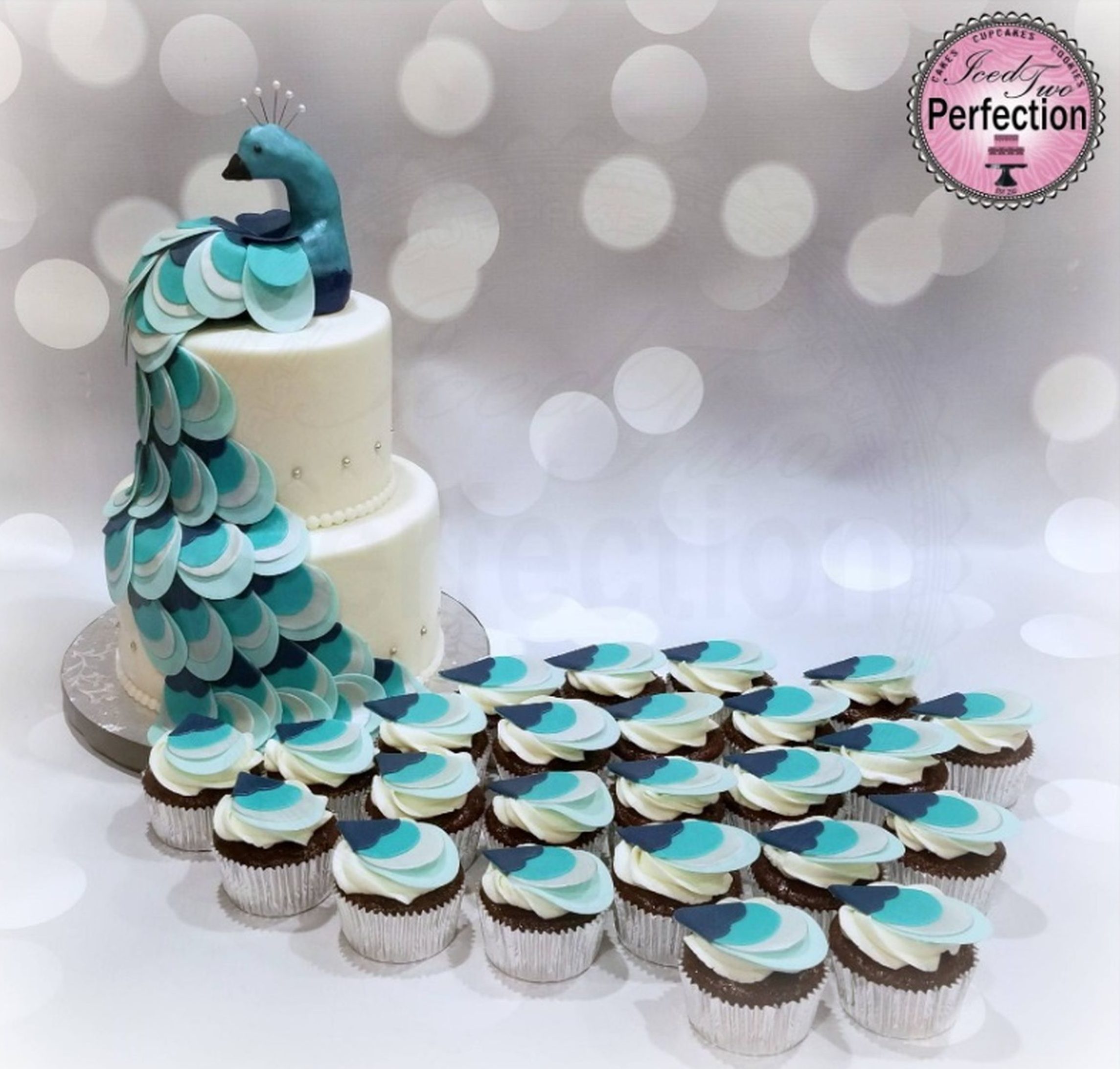 Rena says after the baker dropped off the cake, she immediately text her asking for a refund.

Instead, the baker returned with "a box of Rice Crispies" to try and rebuild the bird.

According to Rena, the baker even admitted she had had problems with the fondant icing, resulting in her having to construct the peacock from buttercream.

"[The baker] had made a cake for my best friend one time. Since then, she had supposedly finished baking school in town," she said.

"First off we sent her a picture via text and she said she could make the cake.

"She came the night before the wedding. She set it up on the table and all the time, I'm looking at this cake, thinking 'really, are you serious?'

"I just walked out of the room. I had nothing else to say to her. 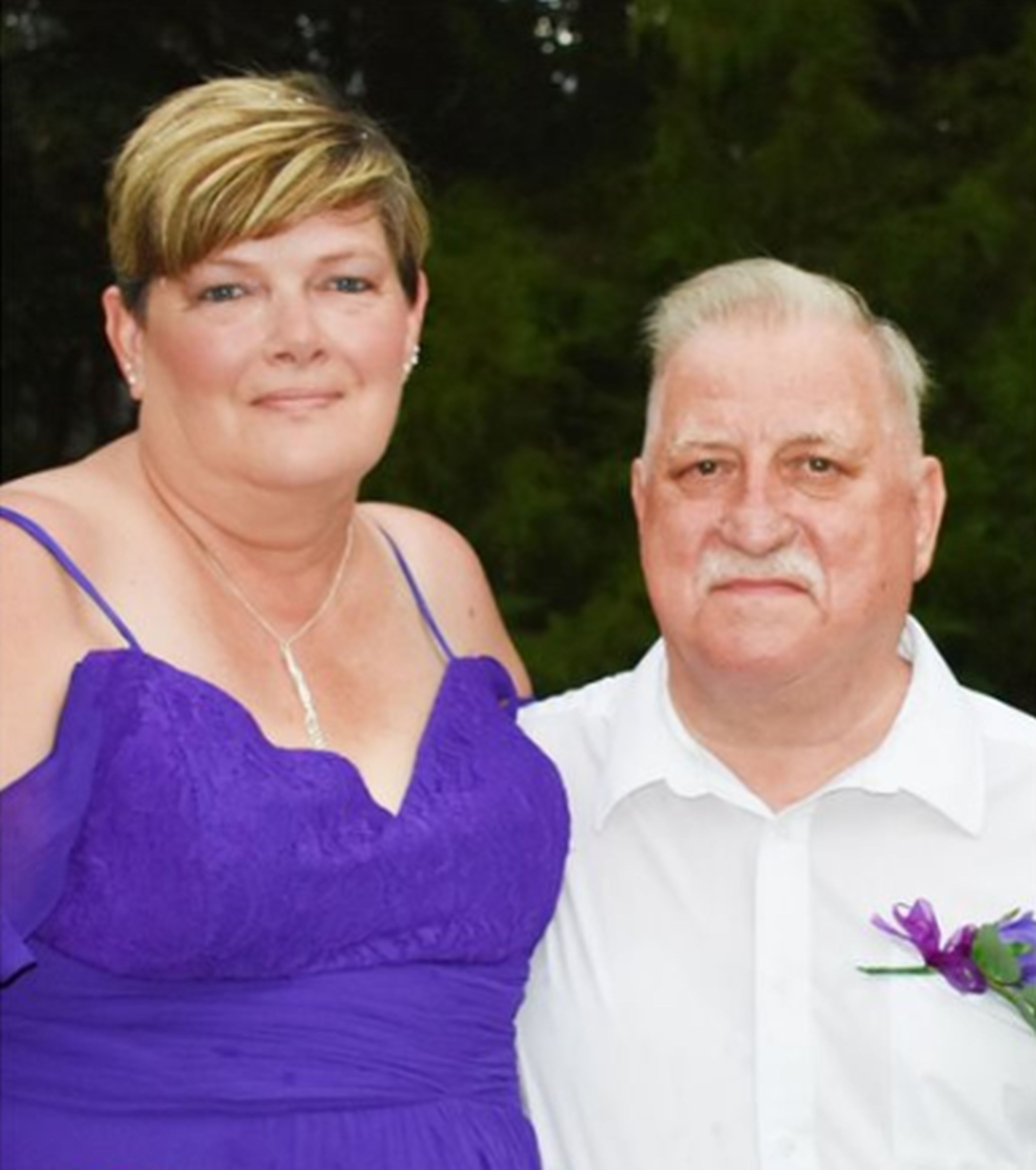 "Five minutes after she'd left, one of the peacocks' heads had fallen off. I text her and asked for my money back, but she said she'd think what she could do.

"The next few minutes she shows up at my house with a box of Rice Krispies. The peacocks were supposed to be fondant too, but I don't know what she had on them.

"When she came back she tried to fix the white bird's head.

"She went outside to tell my husband that she had worked 50 hours on that cake, that she'd taken time off her job.

"It looked like it'd been thrown together the night before. All I asked her was to please give me my money back.

"I text her when she left to say the cake was not how it was supposed to be. It wasn't fondant, it was buttercream, and it wasn't the colours I wanted.

"She said 'well, I couldn't get the fondant to do right – it kept getting bubbles in it'.

"I thought, well at least call me? Never once did I get a call. Everything was always going according to plan and she maintained it'd be there the night before the wedding." 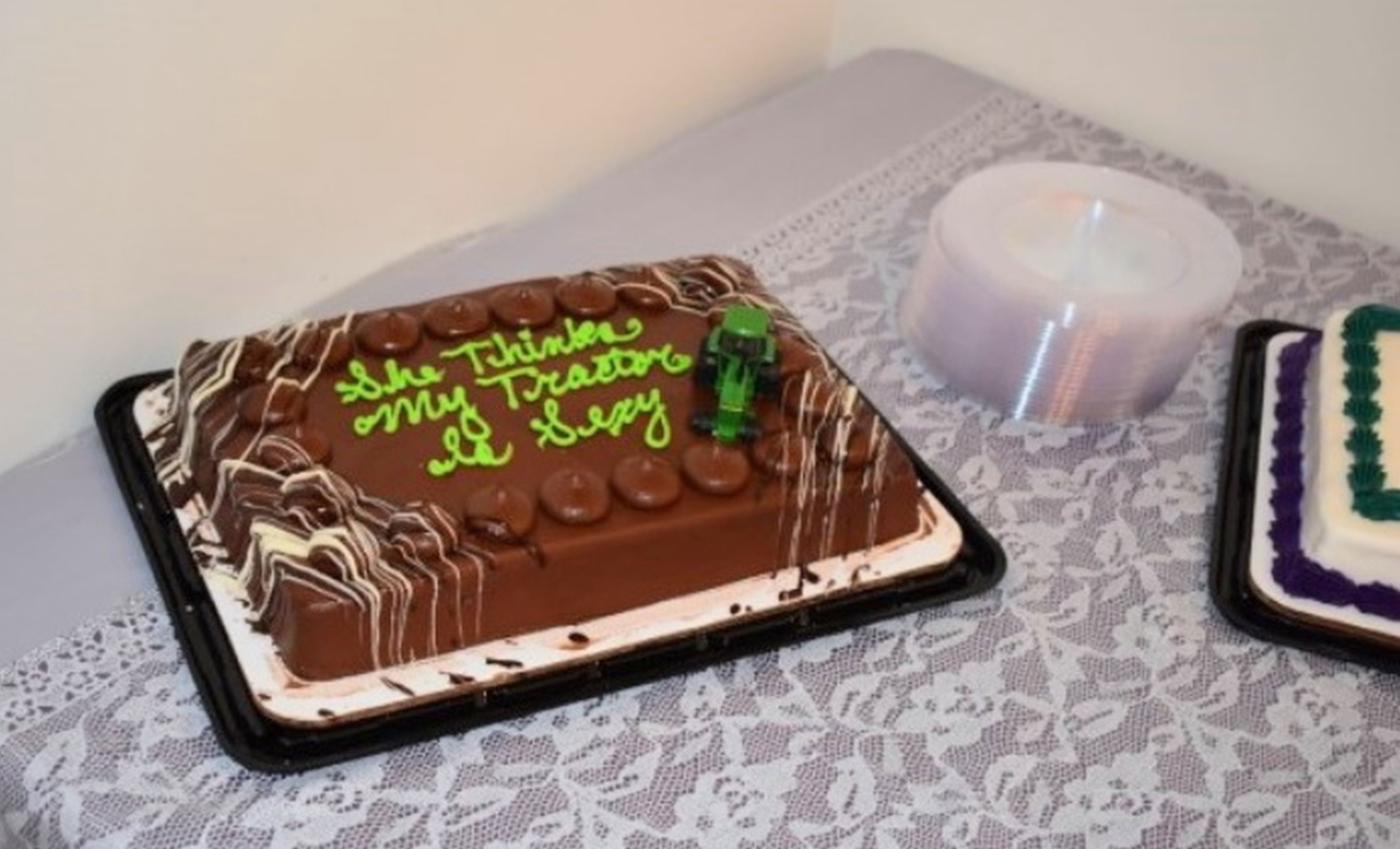 Shaming the cake on social media, Rena's sister-in-law Annette Hill wrote: "The one 'peacock' looks like a turkey with leprosy or something, and the white bird, which isn't white at all, doesn't even have a tail or look like a bird in any way, it's just a brown BLOB!

"There's NOTHING supporting the 'birds' and the cake was already sinking so bad from their weight when it was delivered and it continued to sink worse overnight until the next morning, the day of the wedding, the birds were almost sitting on the bottom layer.

"So, on the morning of her wedding, the bride was going from store to store trying to find a cake that would be suitable to use for her wedding." 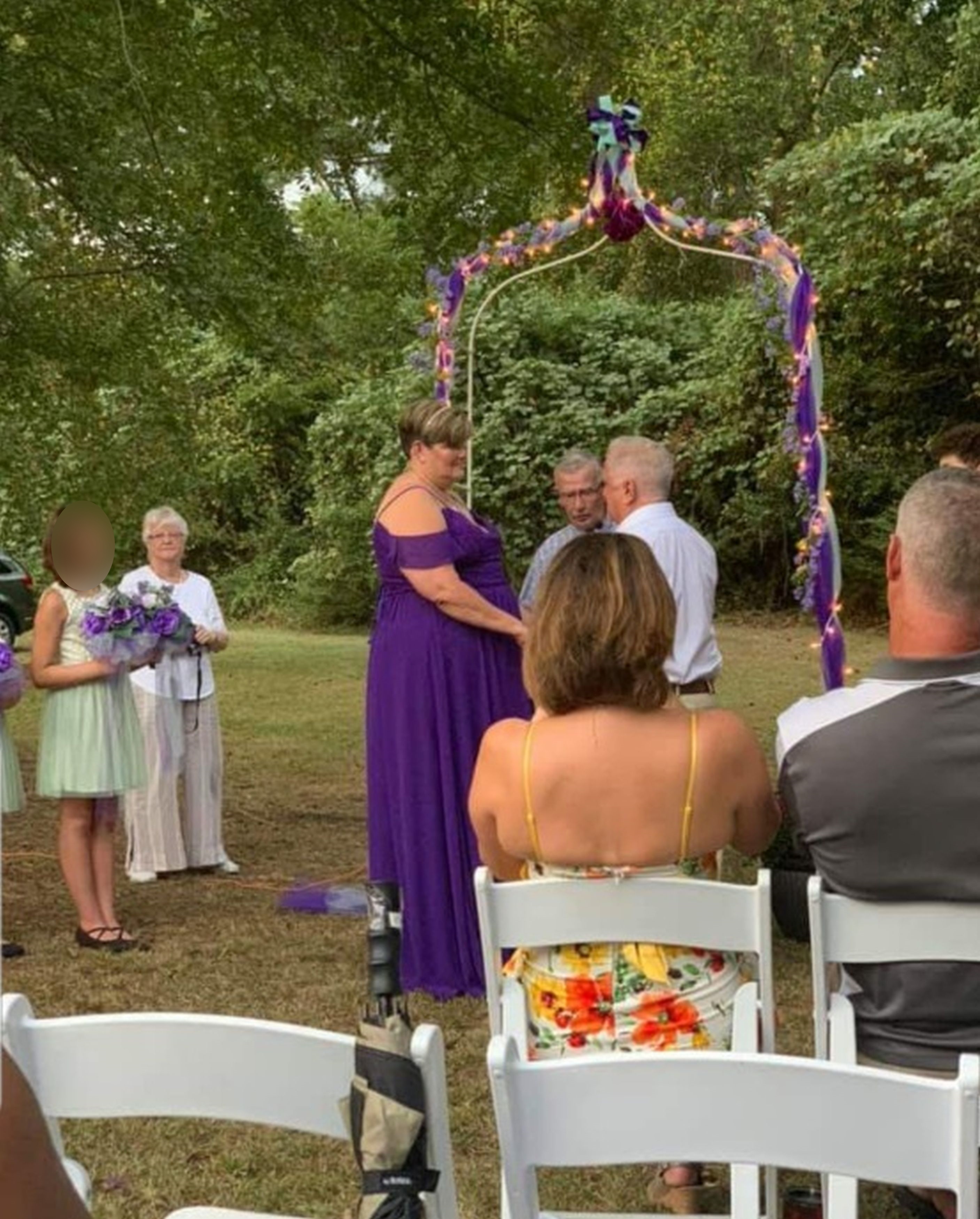 Rena says she was so upset, she left it in the fridge for three days before binning it.

"The cake sat here for three days and she didn't come and get it," she explained.

"It hit the floor like a brick. It was so heavy – there was no way anybody could have eaten that cake.

"I didn't even taste it. I was too angry. I didn't want anything to do with it.

"I was forced to call around on the morning of my wedding. No one had any cakes they could fix for me.

"I went to Walmart and got two cakes. One had purple and green flowers on it, so I got that one, then a triple chocolate one and put a tractor on it.

"On the white cake, I got some love hearts from Hobby Lobby.

"If she had called me when the fondant wasn't acting right, I would have had time to get a new cake.

"Overall, after I went and got the cake and that taken care of, the day was really good."

In other wedding news, we told you how a best man and maid of honour end up MARRIED after priest makes colossal blunder and lists the bride and groom as witnesses.

We also revealed a newlyweds’ romantic photoshoot is mocked for making ‘bride look half-bald’ and giving groom an ‘earface’.

And we showed you how one proud bride-to-be was mocked for making bizarre wedding ring out of her fiancé’s HAIR – which he chopped off and sent her from prison.