A BRIDE-to-be is being trolled online after revealing her black engagement ring is inspired by her dead pet snake.

Posting an image of her sparkler to Facebook group, That’s It I’m Ring Shaming, Can't Stop Won't Stop, the woman proudly showed off her rock.

She revealed her boyfriend finally got down on one knee after 13-and-a-half years together.

And the couple also have eight children – all under nine-years-old.

Her now-fiancé popped the question with a .5 carat ‘dragon glass stone’ ring, with a tungsten carbide band.

But the inspiration behind the ring comes from a rather unusual place – her beloved pet snake, Onyx. 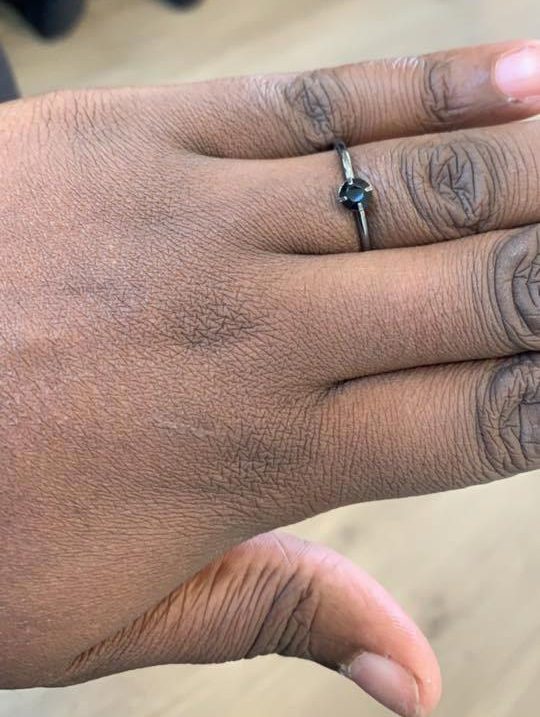 The woman posted: “I requested a black ring in memory of our black python, Onyx, who drowned last summer in the lake behind our house (or swam away, we’re not sure).”

The engagement had been a long time coming, after her partner lost his job seven years ago, but recently found work as a CEO.

She gushed that as soon as he got hired, he bought her the long-awaited ring.

The bride-to-be wrote: “He finally got a job recently as a CEO of a catering company and with his first paycheck bought me this beauty! 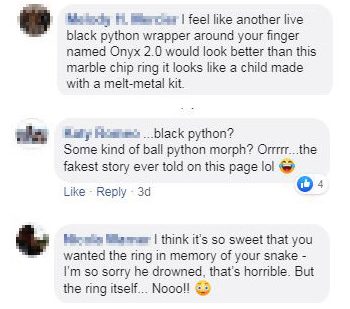 “I am absolutely in love with it, do your worst!!!”

But the woman has been trolled online, with people questioning her entire story, particularly the part about the snake.

One person commented: “I feel like another live black python wrapper around your finger named Onyx 2.0 would look better than this marble chip ring it looks like a child made with a melt-metal kit.”

Someone else wrote: “Black python?

“Some kind of ball python morph? Or the fakest story ever told on this page.”

A third said: “I think it’s sweet that you wanted the ring in memory of your snake – I’m so sorry he drowned, that’s horrible.

“But the ring itself, Noo!”

While this person asked: “I’m so confused by this story… is this real life?”

And this person added: “I’m just impressed someone can be unemployed for seven years and step into a CEO role.

“Maybe I can fly to the moon.”

And this cougar bride desperately tried to please her toyboy fiance who demanded a white wedding with all the trimmings.

Meanwhile this bride’s ‘bodysuit’ for her beachfront wedding was slammed as tacky.