FOR more than a decade, Kim Kardashian West has been one of the most famous faces on the planet.

We meet three women who say the reality star helped shape their lives for the better.

‘Giving women Kim’s bum has made me a fortune’ 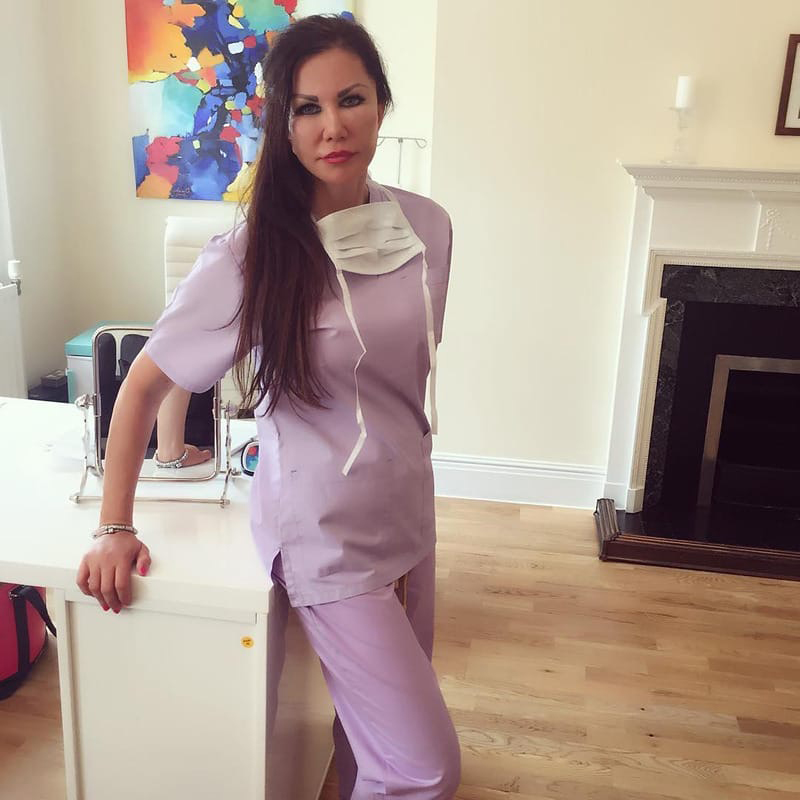 Dr Lucy Glancey, 49, a cosmetic surgeon, lives in Colchester with her husband and six children.

“As the new client walked into my Harley Street office, I wondered why she was here. The notes on my desk said she wanted a Brazilian bum lift (BBL) – a fat transfer procedure that gives women a rear to rival a Kardashian’s. But I could see from looking at her she was already curvy.

“It wasn’t until she took off her jeans and two foam pads fell out that I got the picture. She explained she had spent years wearing padding and always dreamed of curves like Kim’s. And she’s far from alone. I now do at least one BBL a week and am inundated with women who want to look like the Kardashians.

“Growing up in Bulgaria, I knew I wanted to work in medicine like my parents. After studying medicine in Sofia, I moved to the UK in 1995, initially working in a London A&E department. 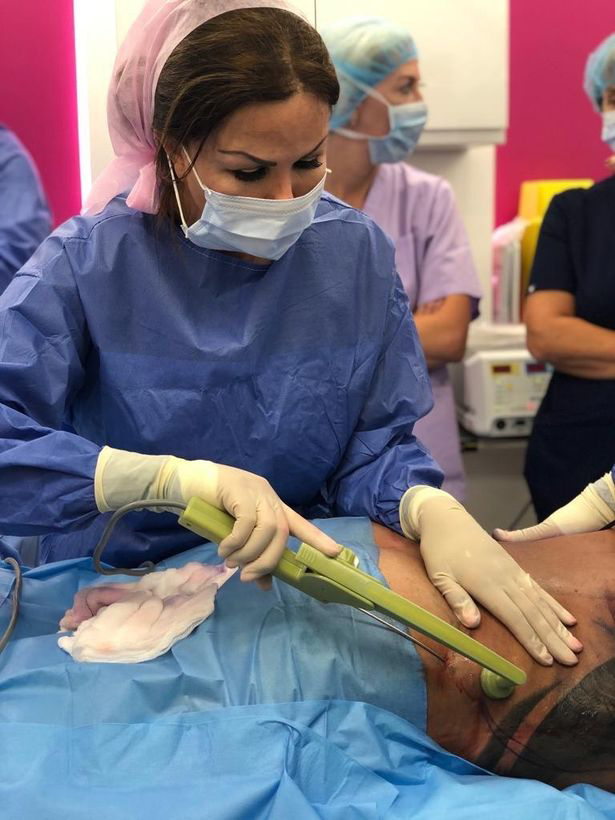 “I’ve always been artistic and decided I wanted to be more creative in my work, so I then studied cosmetic surgery. It took many years but, for me, cosmetic surgery is like being a sculptor – it’s the perfect mix of science and art.

“I now run two successful clinics – one in London and another in Colchester – and have sculpted the bodies of stars from TOWIE and Geordie Shore. I’ve even plumped out the bum of a male household name or two.

“In the past, all my clients wanted boob jobs, but about four years ago bums suddenly became all the rage, thanks to Kim. People used to ask for lips like Angelina Jolie – now they bring pictures of Kim. We never used to get asked for a celebrity’s bottom before.

“In my opinion, Kim has had substantial work. Her waist is tiny and there’s only so far liposuction can go, so I think she’s made her boobs and bum bigger to get that exaggerated look. Women used to be desperate to be skinny, but Kim has changed all that. 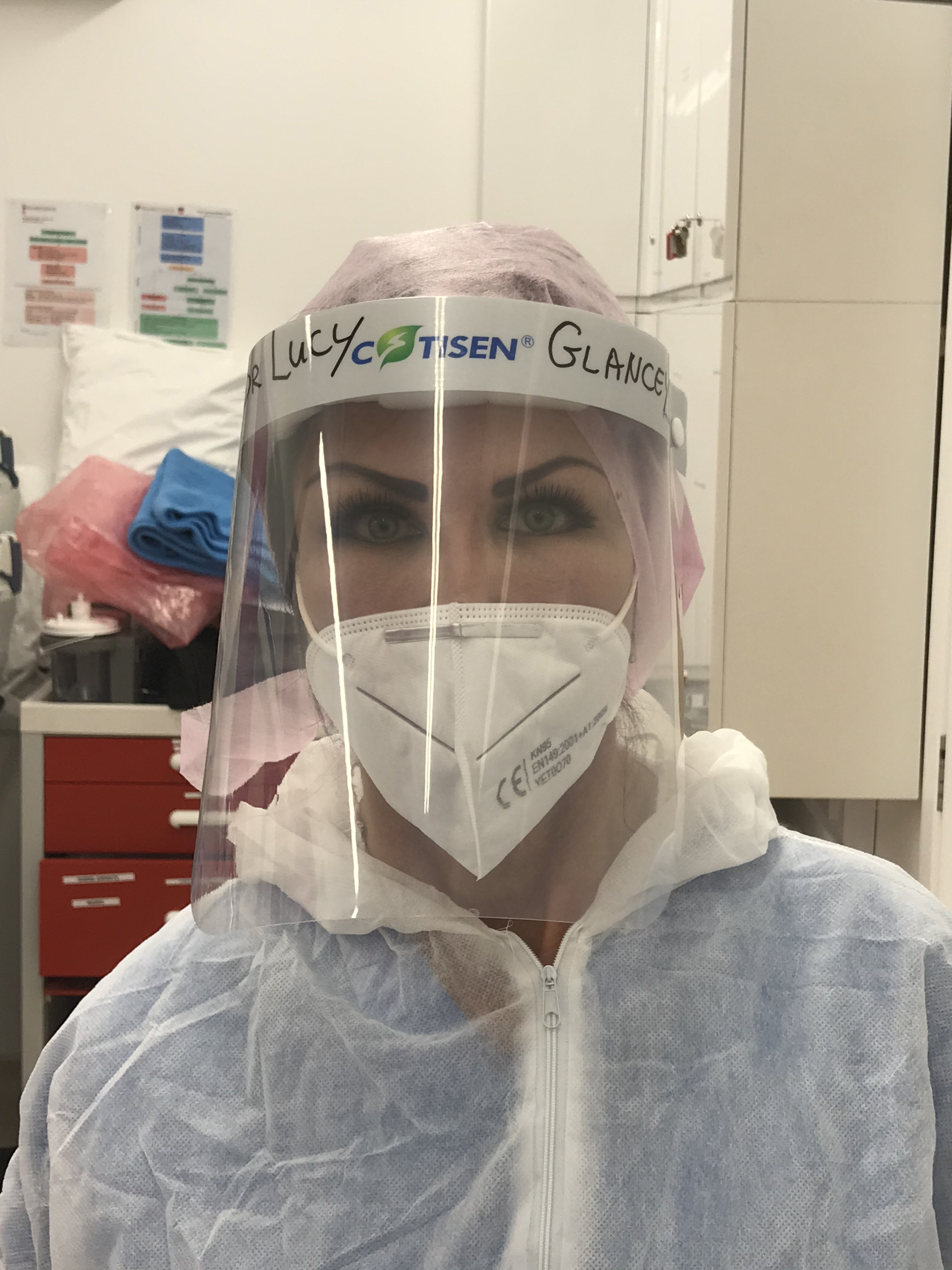 “It’s much easier to sculpt a curvy woman’s body – I can redistribute the fat to create an hourglass shape – but a thin lady may need implants to boost her curves.

“I refuse to treat about 50 per cent of the women who come to me. If I know the results aren’t going to be perfect, I won’t do the operation. I’m about empowering women to look their best, rather than just bringing in the big bucks.

“I don’t have much time to watch Keeping Up With The Kardashians, but I respect Kim for having serious business acumen and being an original.” 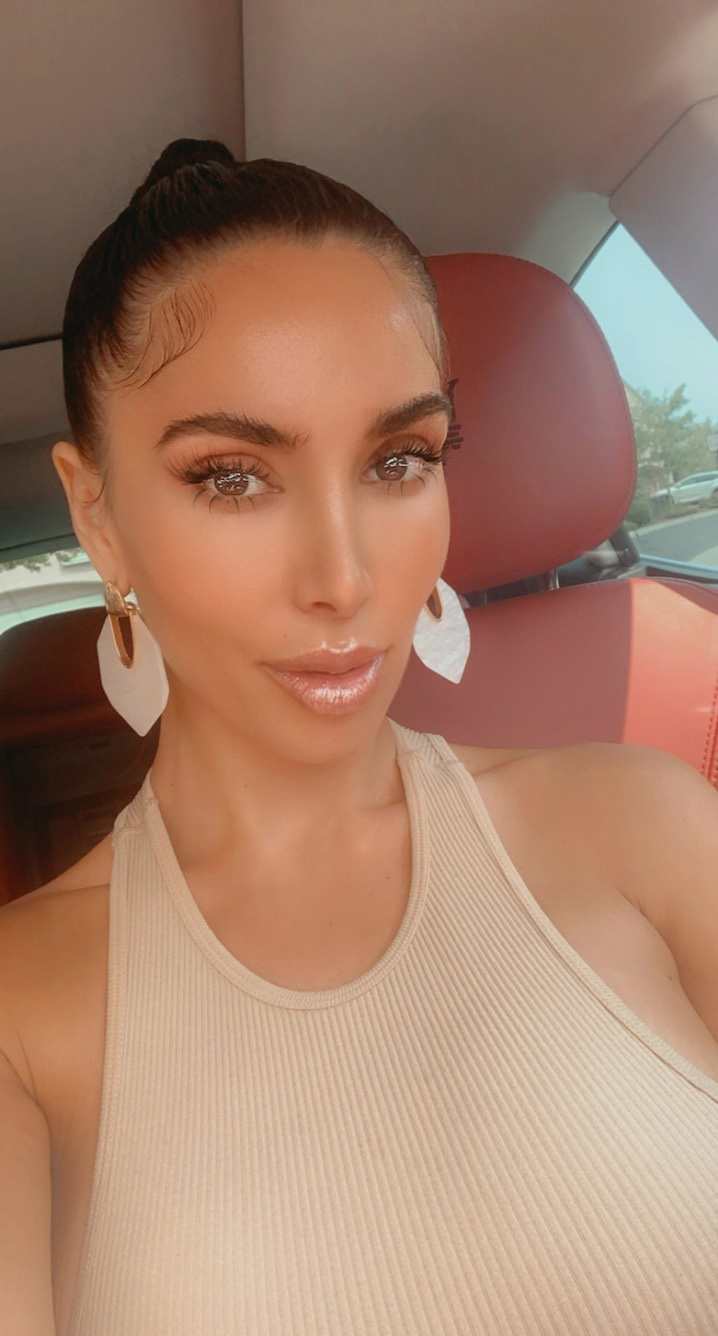 “As I walked into an airport store, the shop assistant gasped. But no matter how much I tried to convince her I wasn’t who she thought I was, she wouldn’t believe me. ‘Don’t worry, I won’t tell anyone you’re here, Kim,’ she whispered.

“I was 16 years old the first time someone at school told me that I looked like Kim Kardashian. Back then, she didn’t have a TV show, but she was always getting papped with Paris Hilton. I remember Googling who she was and thinking: ‘Sure, I’ll take that.’ I’m half-Persian and also have Armenian blood like Kim, plus I have the same dark hair and curvy body.

“As Kim’s fame grew, I began getting more comments that I looked like her. I share a similar style with her and also love sexy clothes. But even when I’d dress casually or dye my hair, I still got ‘spotted’. At the doctor’s surgery where I work as an assistant, people have previously suggested I should
become her body double.

“I had a boob job in 2017, I dabble with lip fillers and do hundreds of squats and sit-ups every day, but I’ve never had surgery on my bum. And I did those things for myself, rather than to look more like Kim.

“Dating used to be tough because I had to filter out a lot of Kim fans to make sure it was me the guy was into. I briefly joined a dating app, but quickly became sick of guys saying they wanted to be my Kanye. Thankfully, I met my fiancé Jimmy through a friend three years ago. 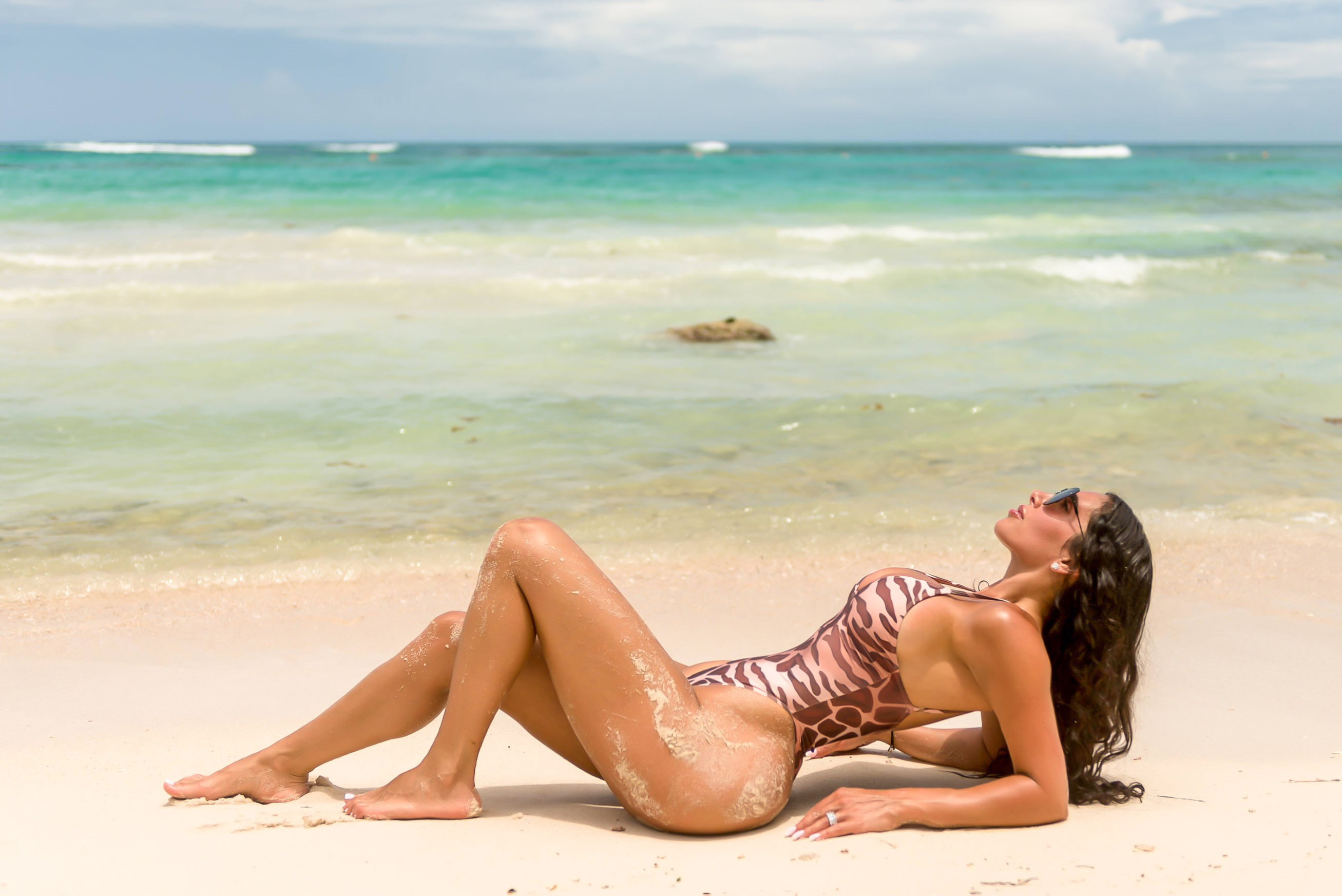 “Most of the time, he copes well with all the stares, but last year in Venice he got annoyed with a man walking behind us and filming. And my family gets frustrated when we are out and endless people ask for selfies with me – even if people realise I’m not Kim once they get close, they still want pictures.

“In October last year, I was out shopping when I was approached by a man who was the spitting image of Clint Eastwood. He told me he made a living as a lookalike and gave me his agent Dot’s card. I wasn’t convinced at first, but that month I went to meet Dot to find out more, and straightaway I realised being a lookalike would be a lot of fun.

“I was supposed to have a jam-packed summer full of appearances. I was booked for lots of corporate events and private parties – and even an advert that was set to pay me nearly £8,000. But I didn’t get the chance to do any events before Covid hit.

“Instead, I’ve been doing Kim appearances online, popping up on Zoom calls and recording private messages for fans. I can earn up to £2,300 an hour for these, but I’m picky about what I do. Some video requests ask for explicit messages, and that’s not my thing. My work as a doctor’s assistant has been on hold during the pandemic, so I’ve been grateful for the extra cash.

“The hardest thing about looking like Kim is coming up against a lot of people who don’t like her. On social media, I’ve been shocked by the nasty messages I receive. People will say I’m pathetic and made of plastic. I don’t pay attention to the haters, but it’s crazy to know that whatever abuse I’m getting, Kim is getting it a million times worse.

“I’d love to meet her. Not only has looking like her changed my fortunes, but I also look up to her as a brilliant entrepreneur. I’ll continue keeping up with Kim for as long as I can.”

‘Kim helped me learn to love my curves’ 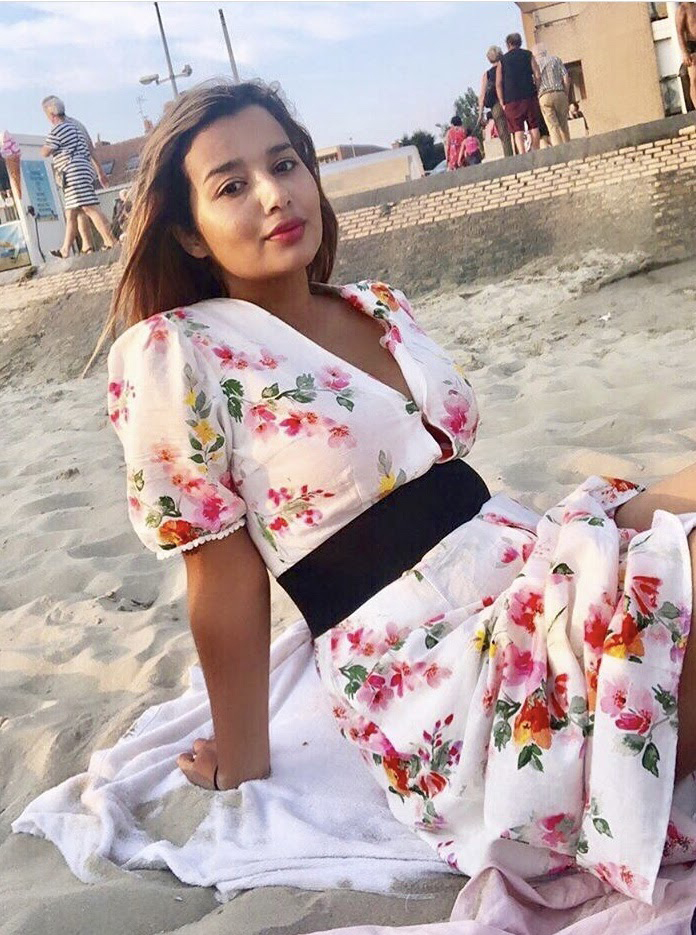 “Standing in front of the mirror in a long, slinky dress, I smiled at my reflection. These days, I like what I see. I’m a curvy size 12 with an hourglass figure, attributes I didn’t always feel so good about.

“Growing up in Dunkirk, France, I always had a sense that I was different. My parents are both Moroccan, so my older brother, 28, and sister, 32, and I share their black hair and olive complexion. But it was my body that set me apart, even from a young age. At eight years old, I began to compare my figure to my friends’, and I couldn’t help noticing how much bigger I seemed to be.

“I was only a tiny bit overweight – no more than a few pounds – but I grew up thinking the only way to be beautiful was to be really skinny. Back then, the only ‘beautiful’ women you saw on TV were thin, blonde, Caucasian ones, and anyone with curves was labelled as fat. I started to be teased about my body at school and began to feel insecure about my differences. 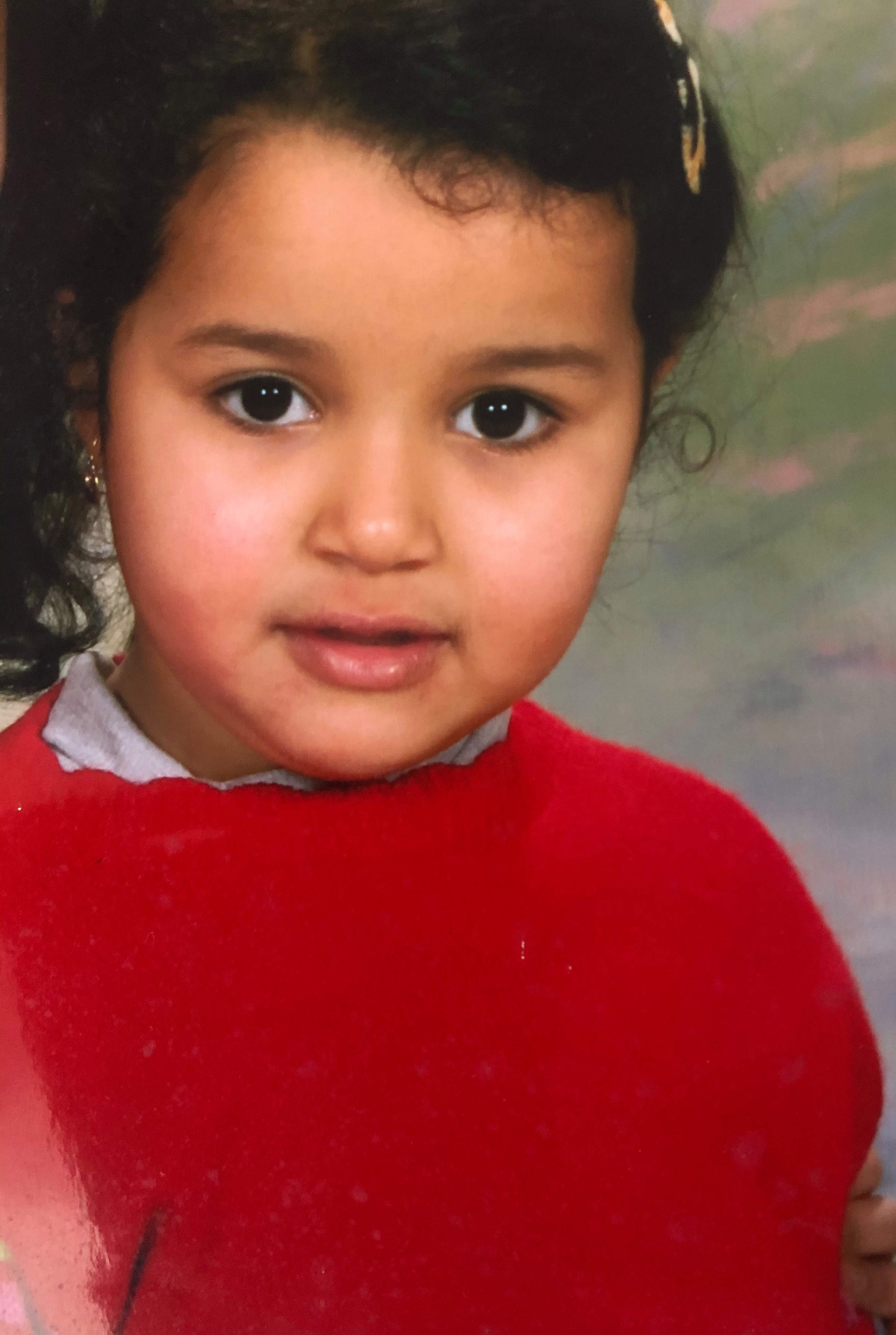 “At the age of ten, I put myself on a diet by cutting out anything sweet and avoiding foods I thought of as unhealthy. I was convinced that I was ugly and that I shouldn’t have any treats. It wasn’t a full-blown eating disorder, and I didn’t lose much weight, but I was on my way towards developing one.

“My worried mum took me to the doctor, who reassured me there was nothing wrong with the way I looked and said I was putting myself at risk by restricting what I ate. After that, I started to eat properly again, but still wished I was thinner and thought my body was abnormal.

“But everything changed in 2014 when, aged 15, I came across a YouTube video of Kim Kardashian. At that time, she was only just starting to become famous in France. I was totally bowled over by her: there she was, with her black hair, tanned skin and a curvy body.

“Seeing how confident she was made me wonder why I thought you needed to be thin and blonde to be pretty. I started to search for clips and photos of her, and it totally changed the way I saw myself. I began to feel more confident and enjoy my shape. If Kim could be curvy, why couldn’t I? 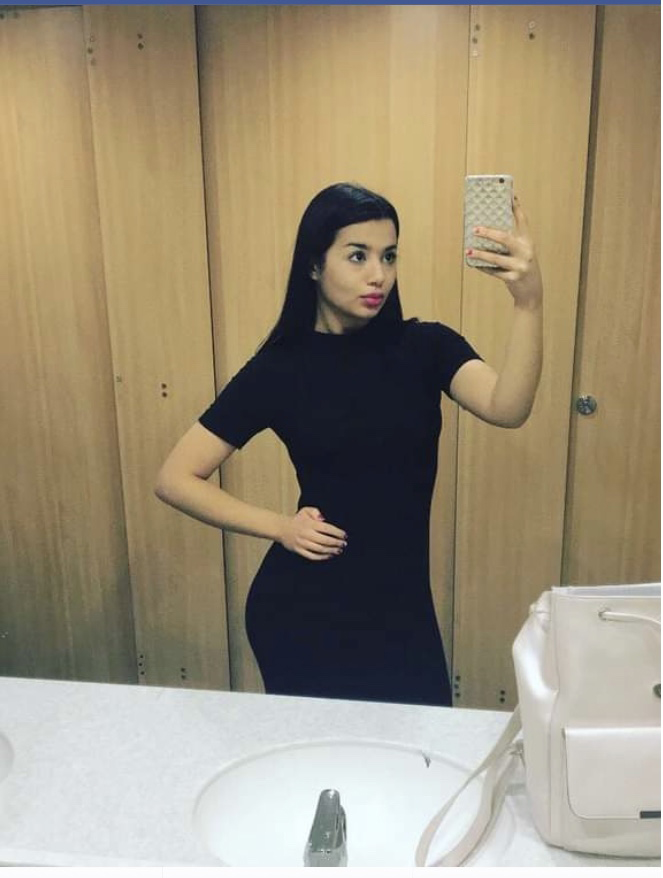 “As Kim became more famous around the world, I noticed attitudes towards curvy women start to change. I even got compliments about my figure, and started to wear much more fitted clothes that I never would have had the confidence to wear before.

“But that wasn’t the only positive influence on my life Kim had. During my teens, my English wasn’t great, but it soon improved from watching so many clips of Kim online! 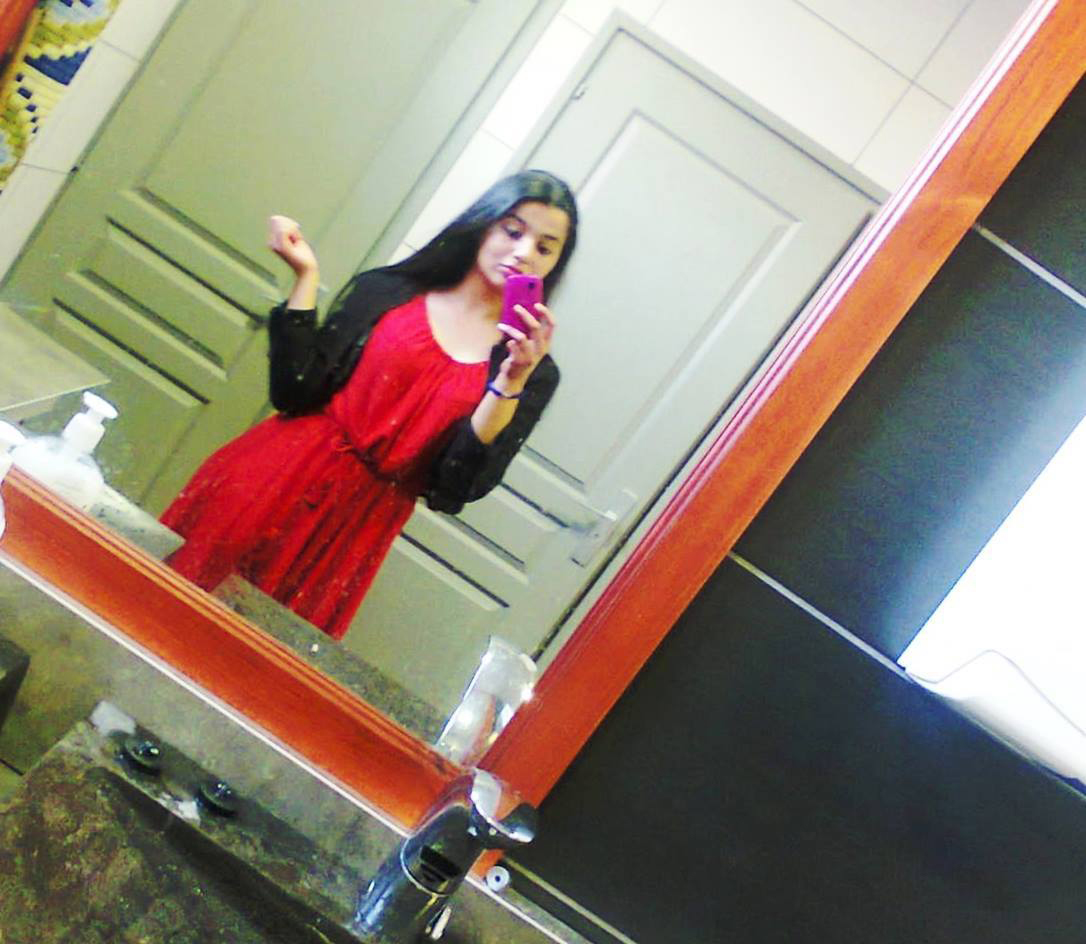 “Hearing about her dedication to staying strong rather than skinny with a healthy lifestyle also encouraged me to join an athletics club – which gave me even more confidence in my body.

“Kim has radically altered beauty standards across the world. I think she’s an amazing role model, though plenty of my friends disagree and say she’s had too much surgery. But she isn’t forcing anyone else to have it.

“I’m grateful for Kim because I owe her my confidence. I just wish there had been a role model like her for me to look up to when I was a kid.”