Home » Fashion » Pandemic Love: Couples Who Found Romance in a Year of Tragedy

The last time anyone celebrated Valentine’s Day, most of the world was carrying on as in any other year: Couples met at movie theaters, bars were full of dates and restaurants were brimming with lovers sharing candlelit dinners.

Twelve months later, the year’s most celebrated date night looks drastically different in the shadow of a pandemic that has killed millions, battered economies and upended daily life. Theaters are closed. Most restaurants have limited capacity, if any. Many people are more reluctant to meet strangers or strike up casual conversations.

But glimmers of hope have persisted — for the vaccine rollout, for the end of a painful winter and for new relationships among all kinds of couples, some who found each other in traumatic circumstances. These four couples managed to fall in love, and in some cases get married, despite the odds being stacked against them.

A cab ride with consequences

A few months before novel coronavirus cases started to appear, a trip to the Arabian Sea and a taxi brought together Maria Saavedra, 37, a law administrator from Luxembourg, and Abdala Ahmed, 27, a businessman from Alexandria, Egypt.

In October 2019, Ms. Saavedra, feeling sad and frustrated with dating, decided to join her friends on a trip to Dahab, an Egyptian coastal town known for diving. Ms. Saavedra said she was sitting alone near the water, reflecting on her troubles, when Mr. Ahmed suddenly appeared.

Like Ms. Saavedra’s friends, Mr. Ahmed had been diving nearby, and the two shared a taxi cab back to an area near her hotel and his dive center. On that ride, Mr. Ahmed started up a brief conversation — and when they ran into each other again in the same area the next day, he asked for her contact information.

“Since that day, we haven’t missed a day talking or chatting,” Mr. Ahmed said. 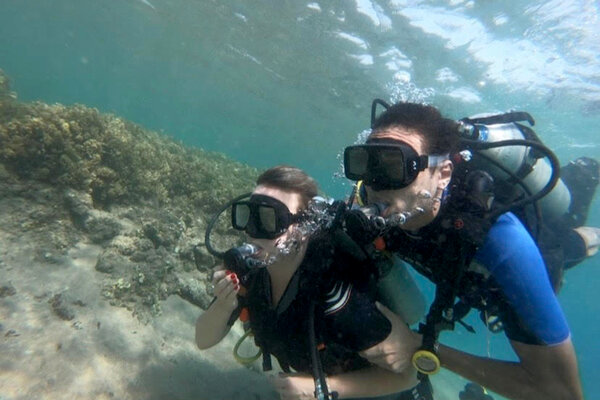 By December, they were in a relationship, and Ms. Saavedra visited Mr. Ahmed in Alexandria that month. The pair had planned to reunite in the spring, but were thrown off course by the pandemic. They spent the next nine months apart but in near constant communication, Mr. Ahmed said, consoling each other through hardships, lockdown and home-schooling Ms. Saavedra’s two children.

“I don’t know how I would have done it if I had not met him,” Ms. Saavedra said in a video interview. She turned to Mr. Ahmed, saying, “You saw me at my lowest in life, you really did.”

By September, Ms. Saavedra was able to join Mr. Ahmed in Egypt. He proposed in Dahab, and they were married in Alexandria in December. While they currently live on separate continents, Mr. Ahmed plans to move to Luxembourg, Ms. Saavedra said, adding they will, eventually, have a second wedding in Europe. “I think the reason we have lasted was because we always tried to be thankful for having met, instead of questioning that we were separated,” she said.

A romance built on social media

Though Greg Marshall and Jade Phan met as college students near Seattle in 2018, they didn’t get to know each other until March 2020, when the pandemic forced them to attend classes remotely, separated by thousands of miles.

Mr. Marshall, 20, and Ms. Phan, 22, had both transferred from Everett Community College to Washington State University, and found themselves taking classes, doing class work and socializing online. With Mr. Marshall in Seattle and Ms. Phan in Can Tho, Vietnam, they initially bonded on social media, over a photo of a miniature pool table that he shared on Instagram, linking with her interests in miniature models.

The post started a relationship based on daily FaceTime calls, text messages and Snapchats between them, they said.

“Because of the time zone difference, I would stay up all night just to talk to her,” Mr. Marshall said. “I felt like Jade was right there with me the whole entire time.”

They remained hopeful that, despite the pandemic, travel would open up again. By July, Ms. Phan was able to take a flight back to the United States to begin classes and to be with Mr. Marshall. Their reunion at the airport was also shared online — the video of their first ever kiss has been seen more than 150,000 times.

A voice leads to love

Standing against the blooming cherry blossoms in Central Park in April, Carolina Morales lowered her mask so that her date, Joe Weel, could see her face. It was an important moment for the Manhattan couple, who met on Bumble two weeks earlier and decided to give dating an honest try during the first wave of the pandemic.

Let Us Help You Better Understand the Coronavirus