A TANNING addict is at the centre of a race row after being accused of being so dark she is “blacking up.”

Make-up artist Chloe Wilson, from Newcastle, has hit back at followers who have called her racist for going on sunbeds to deepen her tan. 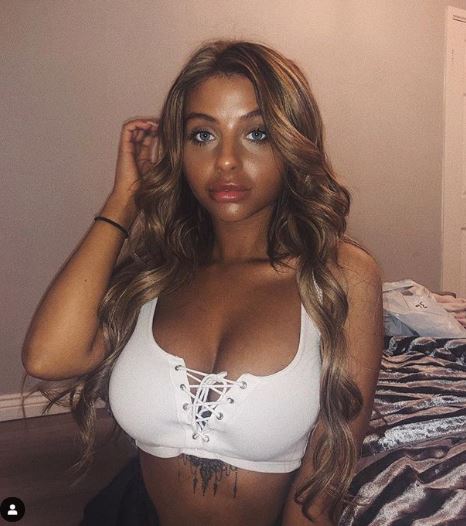 The Instagrammer has racked up 296,000 followers thanks to her beauty looks and tips, but has recently been slated in her comments.

One person wrote on a bronzed photo: “Stick to ur original skin tone maybe ?? I get it to like get a little tan but to look like a WHOLE other race.”

And another added: “How many times do black people have to tell you to stop doing black face???”

But Chloe insists that she simply loves to go on sunbeds. 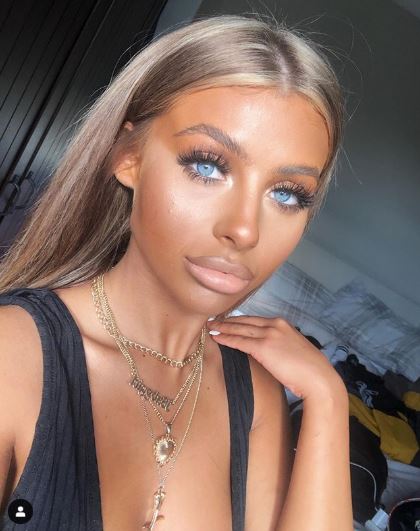 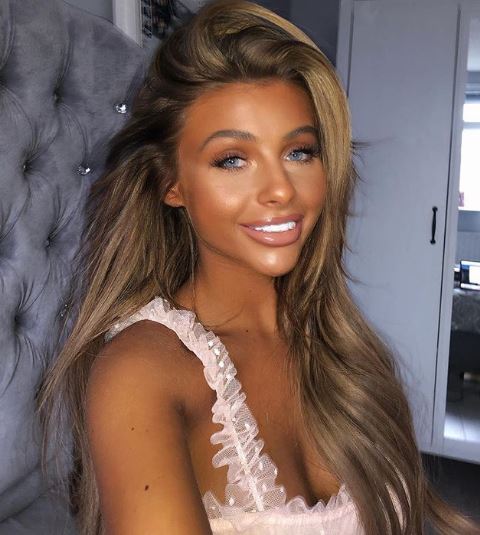 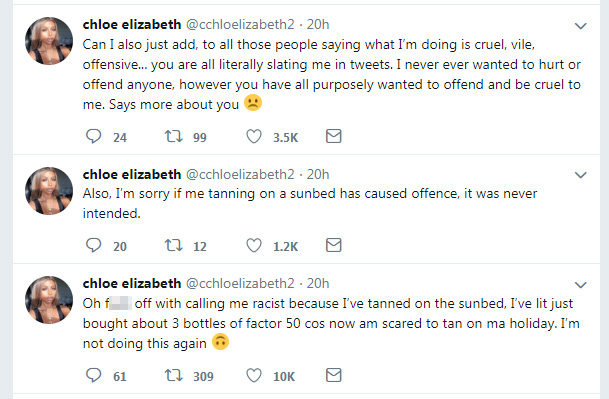 Taking to Twitter, she wrote: “Oh f*** off with calling me racist because I’ve tanned on the sunbed, I’ve lit just bought about 3 bottles of factor 50 cos now am scared to tan on ma holiday. I’m not doing this again.”

Chloe added: “Can I also just add, to all those people saying what I’m doing is cruel, vile, offensive… you are all literally slating me in tweets. I never ever wanted to hurt or offend anyone, however you have all purposely wanted to offend and be cruel to me. Says more about you.”

Some people jumped to her defence, with one fan saying: “Am sorry but you shouldn’t have to apologise for tanning. Get over it fs x”

However, some still claimed Chloe is out of line for her deep shade.

One person replied to her tweet saying: “Tanning to that extent appears as mockery and a form of racism. It’s modern day blackface.” 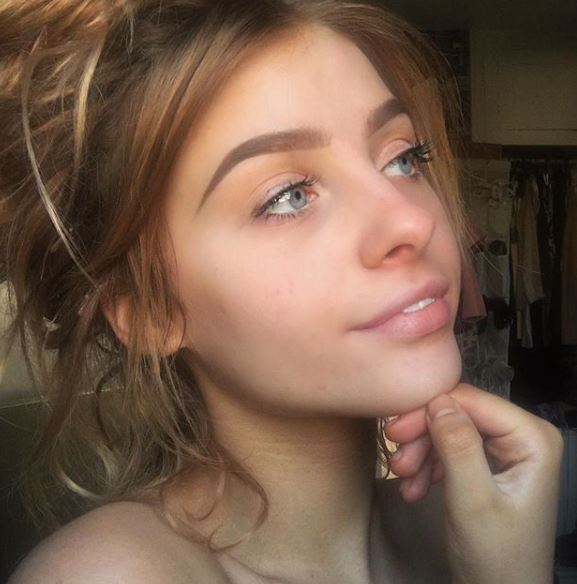 Are sunbeds dangerous and how can you tan safely?

Sunbeds are strongly linked to skin cancer, so while those three minutes might seem harmless – they're likely not.

Cancer Research warns that UV penetrates the skin's layers, so while you might not appear red or burnt, the damage can still occur.

According to the British Skin Foundation, skin cancer is now the most common form of cancer in the UK, with 100,000 people being diagnosed with the disease annually.

Some 2,500 Britons die from the disease every year, equating to seven people each day.

According to the World Health Organisation, sunbeds are as dangerous as smoking.

When tanning outside, The Skin Cancer Foundation suggests that you have to go for a cream with SPF 30 or higher but while most of us know this, we may not know that it's the "broad spectrum" and "UVA high" labels that are the important ones to look for.

While choosing your sunscreen, it's always good to opt for water-resistant and to make sure you reapply every half an hour – yes, really – not just once like most of us do.

With so many amazing fake tan creams, foams, lotions and gels you can safely get a tan all year round AND this will mean you can build up to how tanned you would like to be without having to waste hours in the sun.

Blackface is a form of theatrical make-up used predominantly by non-black performers to represent a caricature of a black person.

It is considered a racially insensitive by many, who find it offensive.

Blackface continues to be a highly controversial issue, both in the US and UK. 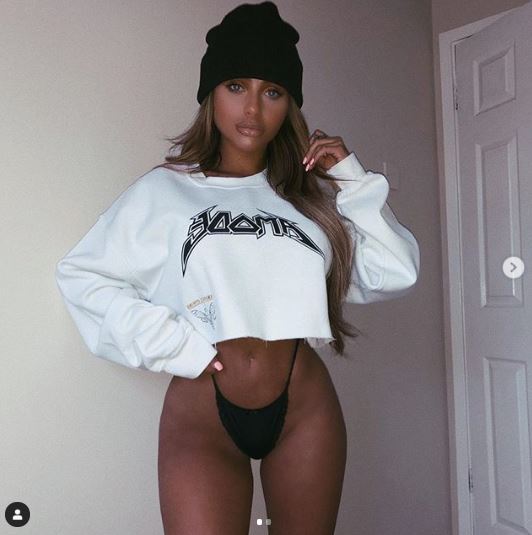 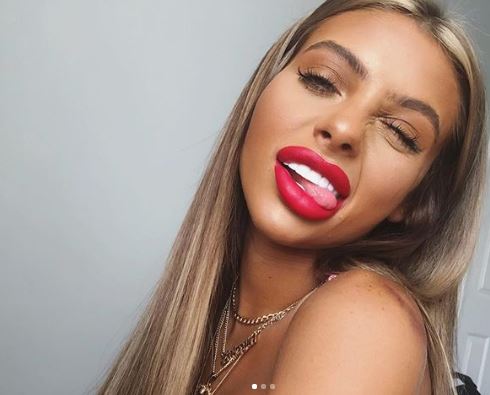 Chloe isn’t the first person to reveal she is addicted to tanning and can get mistaken for a different race due to an extreme tan.

She said she first got addicted to fake tan as a teenager but ditched the beauty products in favour of tanning beds because it makes her "complexion a lot nicer and glowing". 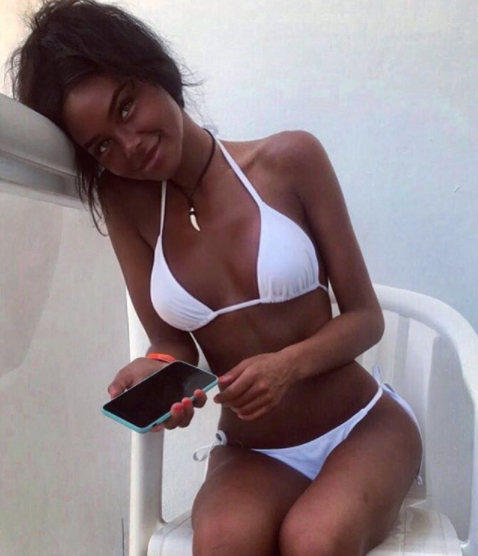 "People attack me online," Hannah added. "If you type 'blackface' on Instagram or even on Google, my name will come up."

Unlike fellow tanning addict Martina Big – who revealed she is moving to Africa to "be with her people" last month – Hannah insists that she's not actually trying to change race.

She continued: "People say I was trying to be a black woman and try and switch races and stuff just because I'm tanning.

"I don't care. These people don't actually know me."

In more bonkers beauty news, dozens of angry women have blasted a mobile hairdresser's "straggly mess" extensions – but the company has claimed they're victims of a "malicious attack".

And this horrifying photo shows the long-term damage caused by picking spots, including severe discolouration and scarring.

Plus an unlucky-in-love bloke has created a dating guide for men based on women's NAILS – so are you a "danger" or a heartbreaker?