If you think about the world’s great designers, most have an indisputable style signature. Chanel has the tweed suit, Yves Saint Laurent’s was the Le Smoking tuxedo and Dior had his bar jacket. And Carla Zampatti, who passed away on Saturday, had the jumpsuit.

Or perhaps it’s more apt to say “has” the jumpsuit, such is the enduring legacy of the garment that she first released in the 1970s to a generation of Australian women who were increasingly working outside the home and enjoying their newfound sexual liberation. 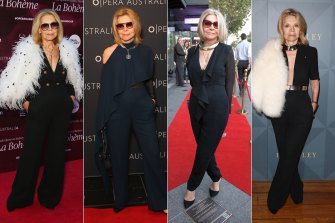 The late Carla Zampatti in her signature style, the jumpsuit.Credit:Getty

For more than 50 years, the “cornerstone” garment has been a mainstay of her collections, whether in solid black with a deep v-neck (her personal favourite), or in soft layers of animal-print crepe that would fall just so, regardless of the shape or size of the wearer. For to wear a Carla Zampatti jumpsuit, no matter the occasion, was to make an entrance.

“If they sit properly, [a jumpsuit can] make you feel taller, slimmer and very relaxed,” Zampatti said last year, which marked the 55th anniversary of her brand.

In fact, her styles were so distinguishable they could be spotted from a mile away, often with their signature mesh panel to, you know, keep things “together”, or a small detail here or there to add intrigue but never so fashion forward as to render them obsolete next season. 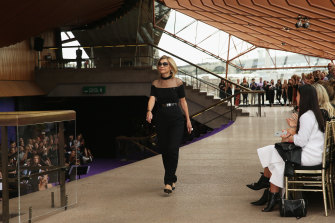 Taking her bow at her 50th-anniversary show, in 2015.Credit:Getty

Of course, Zampatti didn’t invent the jumpsuit. That honour, like so many garments, has its military connections, invented for parachutists in 1919. But, like the trenchcoat and combat boot, the jumpsuit’s place in fashion has become firmly established, thanks to designers such as Halston and Schiaparelli, or celebrities including Elvis and Cher. According to French Vogue, the first jumpsuit appeared in the magazine in 1964. Even Princess Diana was snapped wearing one in 1987 with Princes William and Harry. 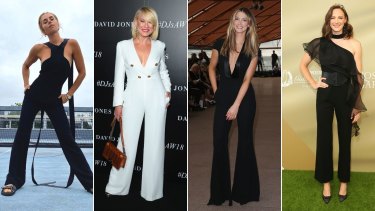 Following the ’80s, when some argued jumpsuits had reached saturation point, Zampatti persevered with her design, such was her dedication to and attentive ear for what her customers wanted. Last year, she shared an anecdote about attending a function in Canberra, where she arrived in the same jumpsuit as another guest, who was just 16 years old.

In a magazine dedicated to the 55th anniversary of her label, which in no small coincidence features a jumpsuit-clad Zampatti on its cover, former Harper’s Bazaar editor Kellie Hush wrote of her first blush with the signature piece, in 2016: “I had always said no to a jumpsuit. I didn’t think I had the figure to wear one – you need long legs! I was oh so wrong.” After her fashion editor convinced her to try it on, “magic happened”, she recalls.

“Carla’s jumpsuits are miracle workers: they give the illusion of having long legs as they elongate everything. And in black, they cover and slim everything. I was sold. I bought that jumpsuit and four years later it is still one of the most flattering pieces in my wardrobe.”

Hush and a bevy of magazine editors aren’t the only ones who fell under the spell of Carla Zampatti’s one-pieces. Other fans of her jumpsuits have included TV personality Sonia Kruger, P.E Nation co-founder Pip Edwards and singer Delta Goodrem, who was among those to pay tribute to the late designer over the weekend. Media personality Kerry-Anne Kennerley said of the jumpsuit she wore to the 2018 David Jones autumn-winter fashion show: “I was even brave enough to wear a white jumpsuit that only Carla could create and give me enough confidence to wear.”

Looking through the many archival photos of Zampatti’s collections over the years, one thing stands out. Whether it’s the 1960s, ’80s or today, the jumpsuit literally jumps off the page. Legend has it that the first time Zampatti designed them, retailer Grace Bros (now Myer) bought them on the spot. Who knows what would have happened if the buyers hadn’t made such a wise decision.

Always one to put her money where her mouth is, Zampatti was often seen wearing her own jumpsuits on the red carpet, and frequently styles from past seasons pulled from her wardrobe – proof that good design and tailoring doesn’t have a use-by date. The fact she did so well into her 70s only adds to her style legacy.

At the time of her passing, Zampatti was busy working on her spring-summer 2021 collection, which will be released towards the end of winter. No doubt among those sketches, some of which she may have left unfinished, will be a jumpsuit or two, ready to become modern classics for a label that while no longer has its matriarch, will always have its signature.

Get a little more outta life

Start your week with practical tips and expert advice to help you make the most of your personal health, relationships, fitness and nutrition. Sign up to our Live Well newsletter sent every Monday.

Most Viewed in Lifestyle