BEFORE making a purchase, it's advisable to read some online reviews first.

This is partly to get an idea of the product and how others have experienced it, but also partly because there can be some cracking stories hiding in the comments section. 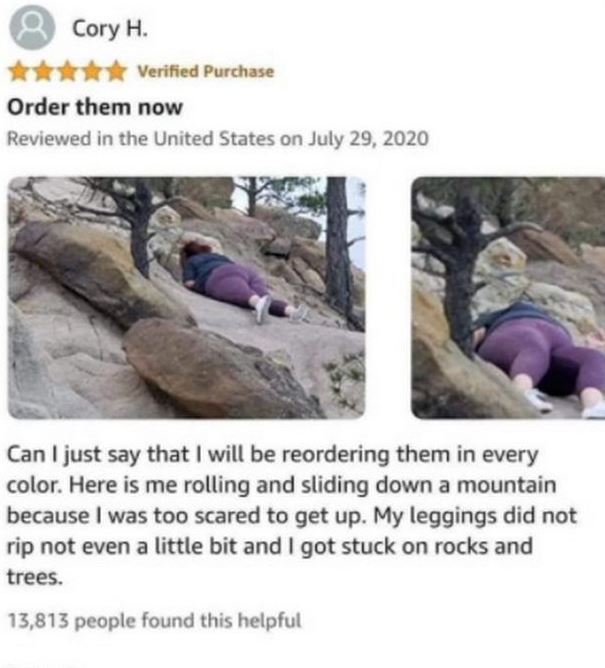 For example, the tale of one woman who was very satisfied with the leggings she bought from Amazon.

The savvy shopper, known as Cory, put her new purple gym pants to the test when she wore them on a hike.

Unfortunately for Cory she ended up sliding down the side of a mountain.

Even if he hiking technique let her down, the trousers didn't as they didn't rip at all during her mountain roll.

She posted her thoughts on the product on Amazon and the review has now amassed more than 15k "helpful" upvotes on the shopping site.

Writing about her £10.64 purchase, Cory said: “Can I just say that I will be reordering them in every colour. Here is me rolling and sliding down a mountain because I was too scared to get up.

“My leggings did not rip, not even a little bit and I got stuck on rocks and trees.”

Cory also attached two hilarious images of herself sliding down the mountain in the impressive leggings.

Another reviewer, Kimberly, related to the post so much that they uploaded their own mountain-side snap in the leggings.

She said: “These Raypose leggings off Amazon are exactly as good as the lady in the reviews says. Glad I bought five!”

The post was screen-grabbed and posted on Twitter where it quickly went viral racking up more than 183,000 likes and 12,300 retweets.

One person said: “I need more product reviews from this woman. No one else can be trusted.”

Another said: “I don't understand how they ended up in this situation but those sound like fantastic leggings.”

A third person said: “I love this woman! If more people posted this kind of review, fewer of us would be buying junk.” 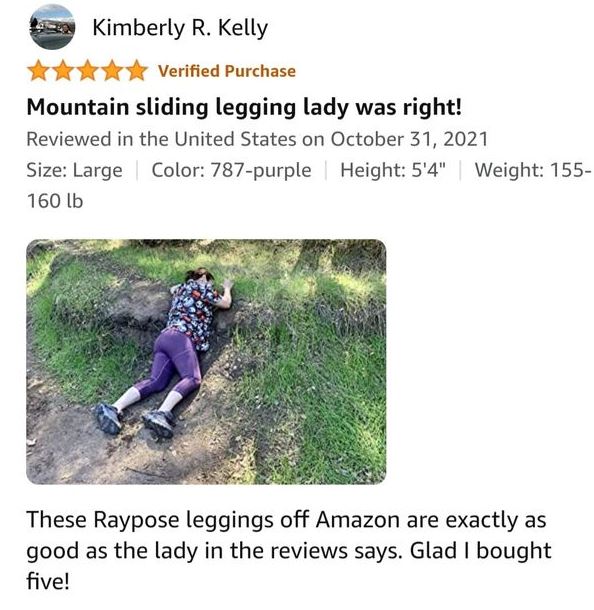 Previously we told how a boyfriend hilariously reviewed a £25 Amazon sex toy saying it was so good for his girlfriend she "nearly killed him".

Plus one woman talked about working in Primark and the strict uniform rules.

Also, another woman shared how to skip the queue in Primark.