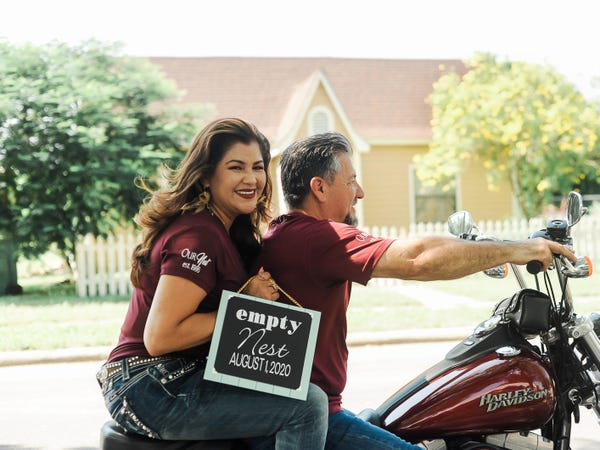 Juan and Dalila Lopez were quite literally jumping for joy when their last child moved out of the family's Pharr, Texas home over the summer. Their youngest, who got married in August, is named Joy.

After 34 years of marriage and raising four children, the Lopezes were excited about embarking on the next chapter of their lives as empty nesters. To mark the milestone, the husband and wife hired Melyssa Anne Moreno, a south Texas-based photographer, to execute a creative and lighthearted photo shoot.

Dressed in matching burgundy T-shirts, holding fitting signs to describe the moment in time, the husband and wife modeled the shoot after pregnancy announcements parents often share on social media.

In one photo, Juan held up a big, silver balloon in the shape of a zero, while Dalila held a board, which read "Expecting 0 kids August 2020."

The couple posed on their motorcycle in several shots, which will be an integral part of their plans for this stage of life.

Delila and Juan's children live between two and eight hours away from them, and they plan to frequently travel to visit them, and their seven grandchildren.

"Our dream is to RV our way to [our children] and spoil our grandchildren, visit national sites, and ride our Harley Davidson down the hills of Texas and meet other 'empty nesters' like us," Delila told Insider.

The couple also has big plans locally — the kind of plans many parents dream about.

"The best part about this is we plan to reclaim our house," Delila told Insider. "Our house is going to represent us now. We love having the freedom to do this."

Delila said she's going to turn one bedroom in a craft room, declutter her closets by giving her kids their memorabilia from their childhoods, getting rid of extra furniture and painting the rooms of the home the colors she likes.

While the Lopezes have been taking this transition in stride, it wasn't always all laughs when their kids started to move out.

"The hardest part was seeing the first one leave because we weren't ready for the detachment and it hurts," Delila said. "By the time the last one left, we were ready for it because we knew that our children can have great and productive lives away from home. It gets easier as life goes on."

For parents who are in the throes of raising children right now, when it's especially challenging during the pandemic, Delila encourages being upbeat and loving.

"Family life is very challenging. Keep in mind that they will grow up someday," Delila told Insider. "Laugh a lot at each other and with each other. Hug them constantly and show them you are proud of them."