Home » Lifestyle » A history professor decorated his house for Halloween to show ‘the real horrors’ of the year: COVID-19 and police brutality 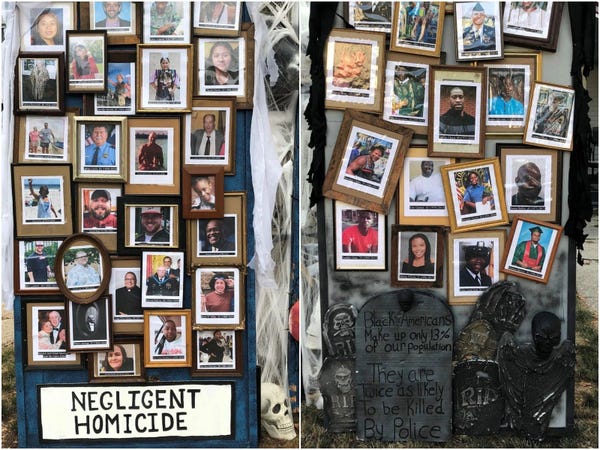 Since 2003, Matt Warshauer, a history professor at Central Connecticut State University in New Britain, Connecticut, has crafted detailed displays outside his home for Halloween.

But instead of more predictable decorations, like pumpkins or store-bought finds, his displays are centered around current events and what he deems "the real horrors" of the year.

This year, Warshauer created a Halloween display that shows photos of victims of COVID-19, the disease caused by the novel coronavirus, and of Black Americans who lost their lives at the hands of police.

One side of Warshauer's display includes pictures of 18 Black Americans who were killed by police, including George Floyd and Breonna Taylor, whose deaths sparked protests around the world this summer.

The other panel outside Warshauer's home has 28 photos of victims of COVID-19. With the help of his daughter, Warshauer framed photos of Americans of all ages to show that the disease has killed people of varying demographics, not just the elderly.

One of the coronavirus victims pictured is Warshauer's sister-in-law's father Alex Kowalenko, who died in April.

"Black Lives Matter and the coronavirus are the two leading cultural and political issues of our day," Warshauer told Insider.

Warshauer said that typically during an election year, he focuses his display on the presidential candidates. This year, he said, he chose to avoid including the candidates in his decorations out of concern that he might face intense backlash from community members.

Warshauer said his goal was to showcase issues "that have captivated and rocked our country."

Warshauer also wants passersby to learn something from the display — which is why he added information about the origins of the Civil Rights movement and the abolition of slavery.

He also crafted a coronavirus-themed panel, where he compared the coronavirus pandemic to the 1918 flu pandemic.

On September 22, Insider's Yelena Dzhanova reported that 200,000 Americans have died from COVID-19 — a grim milestone Warshauer referenced in his display.

At the time of writing, 6.9 million infections have been reported in the US according to the latest data compiled by Johns Hopkins University.

Warshauer also included statistics from the 1918 flu pandemic, which led to the death of 675,000 Americans, as reported by Insider's Morgan McFall-Johnsen.

The display took Warshauer about 40 hours to construct and cost between $200 and $300. He said that he used materials recycled from his past decorations and also received donations from neighbors — who, by now, are familiar with his Halloween tradition.

Warshauer made his first Halloween display in 2003 because he said he wanted to visually express his anger related to the Iraq War. In 2017, Warshauer created a Halloween display called "The Trumpian Ship of State," which featured figurines of Hillary Clinton and Donald Trump on a pirate ship, complete with skeletons and gravestones.

Warshauer said that his 2017 display was notable for the backlash he received — but that so far, his most recent creation has only garnered positive reactions.

On the heels of the widely publicized sale of their aristocratic estate in the celeb-saturated seaside enclave of Montecito, Calif., in an off-market deal valued at $45.5 million, tax records indicate Rob Lowe and Sheryl Berkoff have now plunked down a comparatively…