Home » Lifestyle » And after lunch… it's maths with granny

And after lunch… it’s maths with granny: As parents buckle under the strain, heartwarming tales of the new homeschooling heroes…

For millions of frazzled parents, homeschooling has become synonymous with tears, tantrums and frayed tempers. A survey by the Trades Union Congress reveals seven out of ten working mothers who asked to be furloughed for childcare reasons were refused, and 90 per cent have seen their anxiety levels increase.

But in a growing number of families, grandparents are coming to the rescue. For them, helping out with homeschooling is proving to be an unexpected and heart-warming lifeline.

Lonely, and desperately missing their grandchildren, many have stepped in to help with teaching, either in person if they’re in the family bubble or via video call — with magical results… 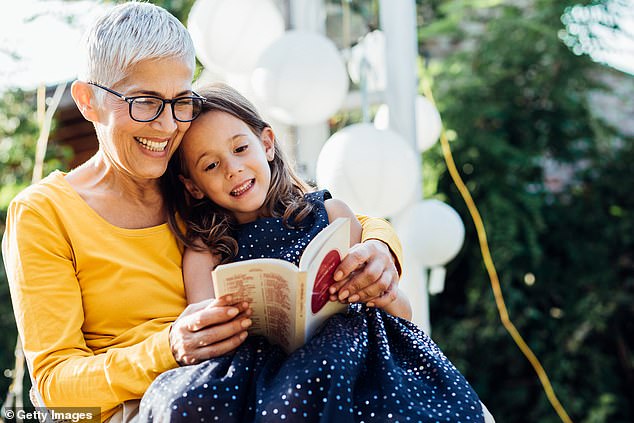 Millions of parents across the UK have struggled with homeschooling kids during lockdown. And an increasing amount of grandparents are now stepping up to help out

MY THREE PUPILS BRIGHTEN MY WEEK

Joy Nicel, 72, is retired from running a retail business with her husband Keith, 73. They live in Brentwood, Essex, and have three children and eight grandchildren. They are online-schooling three of them — Gemma, 11, Rebecca, seven, and Edward, five, who also live in Essex.

Joy says: My daughter Katherine and her partner James work from home in the automotive industry. While they were struggling to juggle their jobs with homeschooling, I was missing my grandchildren terribly. So now I teach the children four days a week, from 1.30pm to 4.30pm.

Only the eldest, Gemma, had her own laptop, so Katherine had to resurrect an old one from a cupboard, and James managed to get hold of an unused one from his previous workplace. Luckily I’d treated myself to a new computer at Christmas in 2019. We’re very conscious that not all families are so fortunate. 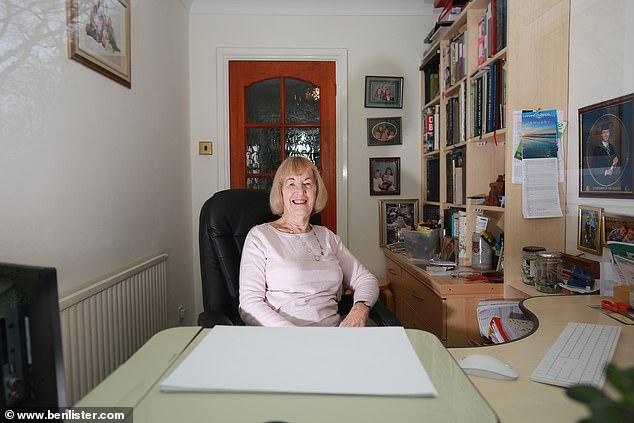 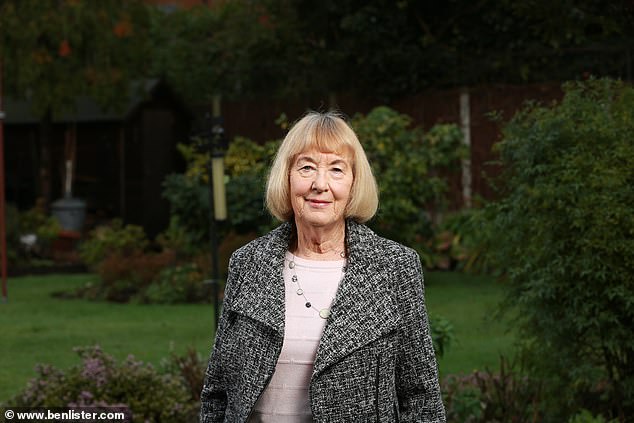 Although it’s tricky as the younger ones, Rebecca and Edward, have short attention spans, it’s also something I really look forward to.

Edward is in Reception, so he has to concentrate more than when we did this in the first lockdown. But he’s not daft. The first time he read a school book to me earlier this month, he read two pages then flicked to the last page and said: ‘The End!’

Rebecca has more work to do, which her teaches load online for us to access. Some of it baffles me, such as a lesson on frontal adjectives. She wrote a lovely poem recently, as did Gemma, who started secondary school last September.

Gemma has a number of live lessons because she’s older, but I’m doing Spanish with her using the language app Duolingo.

My secret weapon is the marble jar. For every good piece of work, they get a marble. At the end of lockdown I’ll exchange each one for 5p. They’ve got quite a few marbles!

I’m so fortunate to teach them online until we can be together.

I FEEL CLOSER TO MY GRANDSON THAN EVER

Patricia Hulse, 70, is a retired teacher and lives in Stockport, Greater Manchester, with her husband. They have two children and three grandchildren. She’s online-schooling her grandson Ethan, eight, who lives nearby with his parents and younger sister Megan, four.

Patricia says: Despite barely seeing my eight-year-old grandson, Ethan, in the past ten months, I now feel closer to him than ever after just three weeks of homeschooling via Zoom. 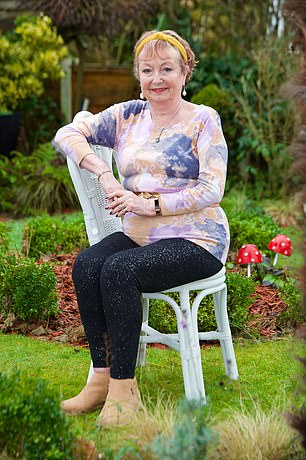 Patricia Hulse, (pictured) 70, from Stockport, is online-schooling her grandson Ethan, eight, who lives nearby

His dad Daniel, my son, is a telecoms consultant working from home, and his mum, Carmelah, is a nurse. Daniel called at the start of lockdown and asked for my help teaching. I jumped at the chance. I teach Ethan on Wednesdays, Thursdays and Fridays using the lessons his teacher puts online. Thankfully Daniel had an old laptop he managed to get working again for Ethan, and I’ve got an iPad.

We work using a split screen on Zoom so I can see the work Ethan is doing.

He has lots of distraction techniques which make me chuckle, including wandering off to find rubbers and rulers and spending an age sharpening his pencil.

I concentrate on English and maths. The latter is the subject he can be most awkward about. Yesterday, he worked hard on his sums for 45 minutes before he glazed over and slid off his chair!

The subject I’ve enjoyed most has been the Egyptians. My husband and I have been to Egypt many times so I can bring the topic to life.

Megan has told me she’s jealous of Ethan’s lessons with me, so I’m going to start reading stories to her.

Granddad waits till I’ve finished then appears on the Zoom call to tell jokes and make Ethan laugh.

And Daniel tried to sabotage one of my lessons by putting a snowball down Ethan’s back when he was concentrating. But a bit of lightness is what we all need.

Sue France, 72, runs a women’s networking and event business. She lives in Cheshire with her husband Peter Winterbottom, 74, a retired accountant. They’re homeschooling their granddaughters Cianna, nine, and Lyla, six, in person five mornings a week.

Sue says: Four weeks ago, I received a call from my son Adam, who works from home in telecoms, and his wife Nicki, a primary school chef, suggesting we form a care bubble in order to homeschool our granddaughters at our house. 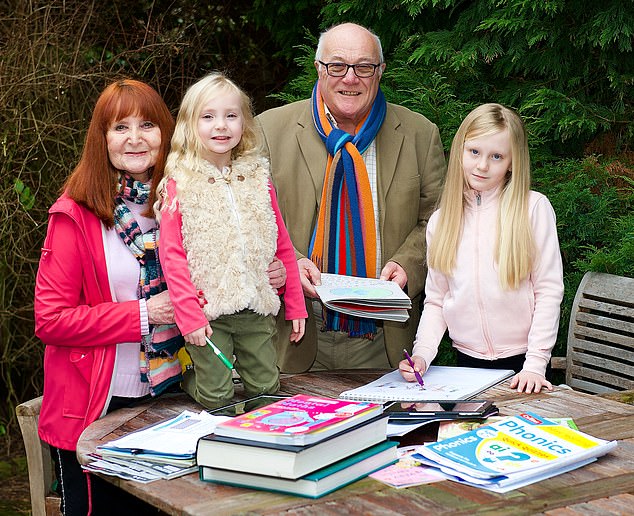 We were absolutely thrilled! We’ve barely seen Cianna and Lyla since last March. We’ve set our dining room up as a classroom with the girls’ books, pencils and laptops, and devised a timetable including breaks in the garden.

Adam drops them off at 9am and Nicki picks them up at 1.30pm when she’s finished cooking school lunches.

It’s brought Peter and I together, too, as we teach them as a team. He uses his accountancy skills for maths, while I help with English, reading and spellings.

Both girls have Zoom lessons with their classes and assignments to complete. Cianna has an iPad and luckily we gave Lyla one for Christmas. We have to be creative with Lyla as she’s too young to concentrate for as long as Cianna.

For instance, if she has spellings to learn we do role play, letting her be the teacher while she tests us and marks our work.

One of Lyla’s tasks from her teacher was to write five facts about a country in the UK. She chose Wales and discovered that it has the world’s fastest zip wire.

The girls love Grandma and Grandpa’s school and we’re relishing being their teachers, having thought we wouldn’t get to see them again for months. 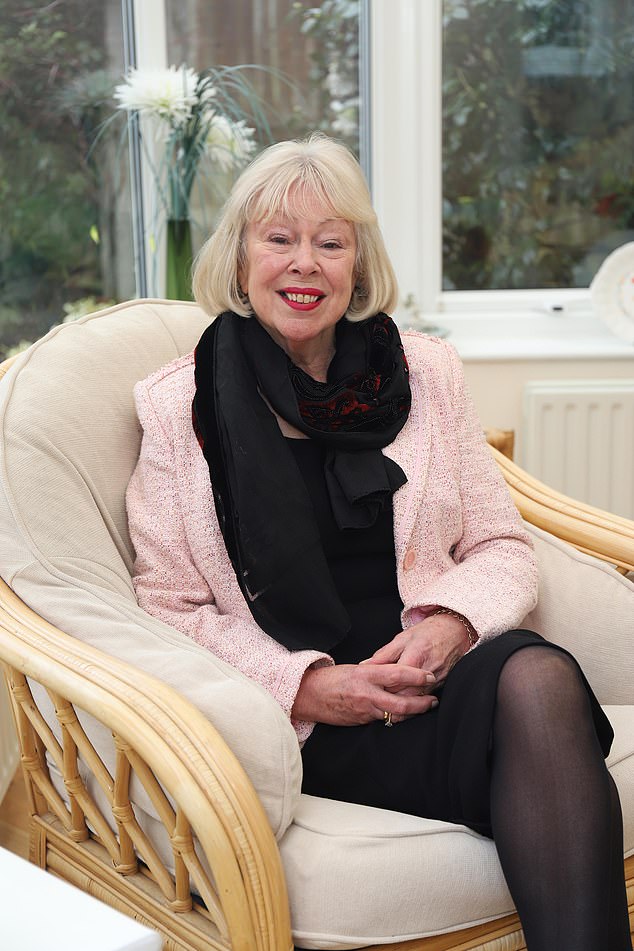 Pat Lewis, (pictured), 73, from Poole, Dorset is helping to homeschooling her grandson Ned during the latest lockdown 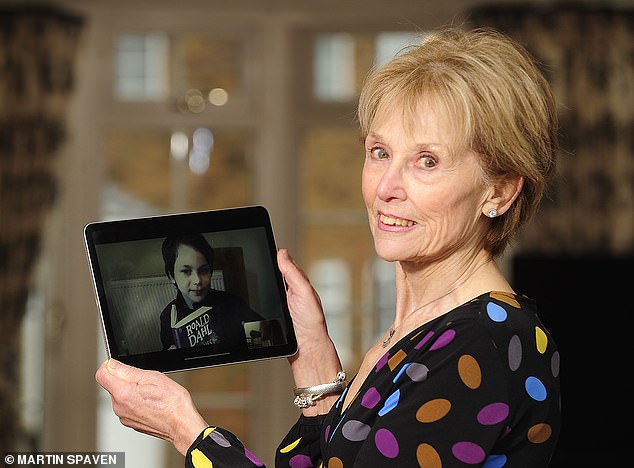 Marjorie Johnston, (pictured) 77, a widow, is also a retired secretary and lives in Maidstone, Kent. She takes in in turn with Pat homeschooling Ned

They take it in turns to homeschool their grandson Ned, who’s eight and lives in Poole with his mum Emma Johnston, 47, a part-time school administrator, and dad Nick, 46, who’s a software developer for a bank.

BUBBLE OR NO BUBBLE, HERE’S HOW TO HELP

Remote learning offers a chance for grandparents to play a significant role in their grandchildren’s lives through lockdown. With younger children, reading over video calls is great.

Grandparents could order two copies of an age-appropriate book; one gets delivered to them and another goes to their grandchild’s home. You experience the excitement of the book arriving, then the child’s delight in being able to turn the pages and look at the words and pictures while being read to.

Children learning to read could also make an alphabet box. Grandparents set a task to find as many objects from around the house that start with a particular letter sound. In their next session, the child can present what they’ve gathered. Older children can also read out loud and discuss book themes. Exchanging letters provides great handwriting practice.

Primary school-age children are still fairly uninhibited, so they’ll like performing to webcam: reciting poems, dancing, and acting out plays. This will be enjoyable for all parties, and helps recreate school activities they’ll be missing.

Secondary-school children can also be helped by their grandparents. Games such as online Scrabble will stimulate vocabulary.

With GCSE and A-Level students, grandparents can be a sounding board during essay writing.

They don’t need to know about the subject — just lending an ear and asking basic questions can be beneficial when it comes to formulating clear ideas.

A grandparent can become a mentor and a kind ally in their grandchild’s education.

Pat says: Ordinarily, we’d see Ned three times a week, but other than a socially distanced exchange of presents in the garden for a few minutes at Christmas, it’s been months since we were together.

Worse still, it’s ten months since Ned was able to give me one of his lovely hugs.

I miss being able to nuzzle into him, smell his hair and feel the warmth of his skin.

For now, though, our one-hour Zoom homeschooling sessions with Ned on Mondays and Fridays, where we listen to him read, are the highlight of our week.

He makes us chuckle with the different voices he uses — high-pitched for female characters, and low and gruff for the men. If there’s a word he doesn’t know, he simply spells it out so we can help.

When he’s finished his reading, Alan and I play his favourite card game Uno with him, which gives us time to chat and have fun.

It also gives Emma and Nick a chance to catch up with their work.

They can’t speak highly enough of Ned’s teachers — who are also teaching key workers’ and vulnerable children — for providing lots of pre-recorded lessons for them to do with him at their own pace.

He can dial in for three live meetings with his class every day.

Marjorie says: ‘It was Emma and Nick’s idea to get Pat and I involved in listening to Ned read, and I jumped at the opportunity as I don’t want to lose the bond I have with him.

Luckily, they had an old desktop computer given to them by my brother long before the pandemic, which they’ve been able to dust off for Ned.

I’ve only seen Ned once this past year and have missed him terribly, so being able to read with him and play games — albeit via Zoom — for an hour on Tuesdays and Thursdays is wonderful.

I keep a diary of our sessions, detailing the book, chapter and how well he’s done, and have made reward stars for great work.

When he’s finished reading, we play snakes and ladders. He rolls the dice and moves my piece.

He’s such a happy and kind boy and our sessions are keeping me going while there’s so much negative news during the pandemic.