Home » Lifestyle » As Greggs launches its vegan steak bake, Femail puts it to the test

As Greggs’ vegan steak bake prompts queues around the block, FEMAIL tests the meat-free treat to see if it’s really a ‘mirror’ of the original (and the reviews seem VERY promising)

With Brits rushing to taste Greggs’ first ever Vegan Steak Bake, FEMAIL has put the snack that claims to be a ‘mirror of the original’ to the test.

The hotly-anticipated, meat-free pastry finally launched across the UK today, with with a roll-out at 1,300 stores, prompting 200 people to queue in the freezing cold in Newcastle to get their hands on the £1.55 Quorn-based treat.

Made of 96 layers of no-butter puff pastry, the Quorn and onion gravy-based snack comes a year after the chain launched its popular vegan sausage roll – but is the Vegan Steak Bake worth the hype?

Delighted fans bragged about their purchases on social media, with one writing on Twitter: ‘Vegan steak bake from Greggs is absolutely amazing I want another 20’

Others were less convinced by the aesthetics, with one customer claiming it ‘looks like cat food’ but ‘tastes great’.

Here, six MailOnline reporters give their verdict on the new savoury snack… 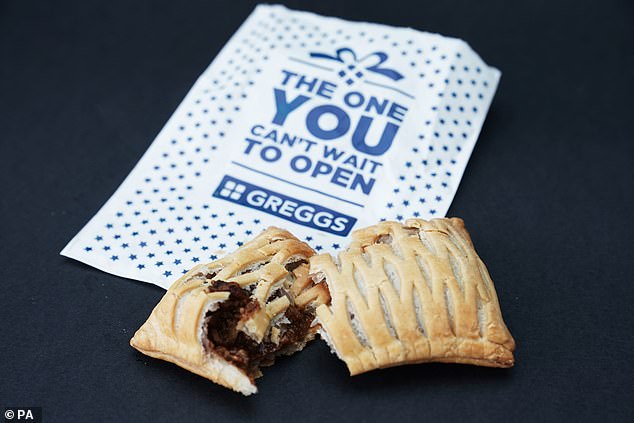 Greggs have finally launched their hotly-anticipated Vegan Steak Bake, seen above, today. It’s available across the UK in 1,300 stores 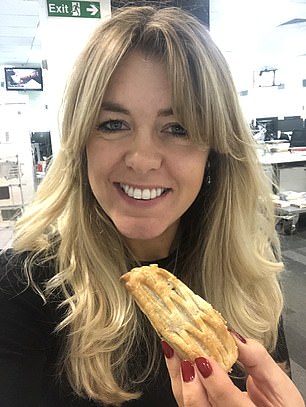 I am a loyal fan of the original Greggs steak bake, so this vegan treat had a lot to live up to.

On the whole I was very impressed – I noticed little difference in the pastry; it was crisp and delicious.

The generous filling itself was also very tasty; the gravy had the distinctive peppery notes of the traditional steak bake, and it did carry a convincing meaty flavour.

The only tell-tale sign for me was the texture – I missed the chunks of steak, because this was more like mince when you bit into it.

But if you are keen to give ‘Veganuary’ a go, I would definitely recommend this as a yummy alternative. 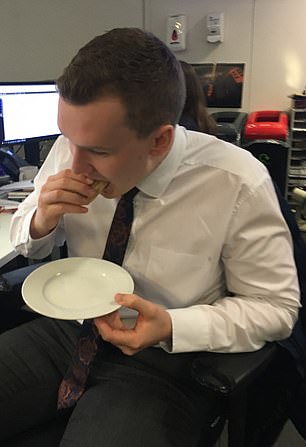 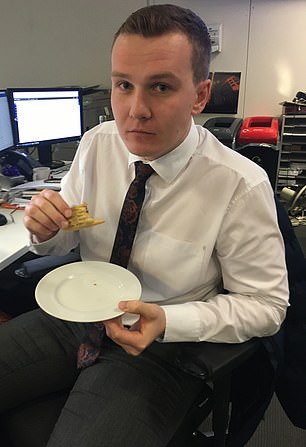 Joe (pictured) said Greggs’ new offering was a ‘big win’ for the UK firm, with the savoury snack boasting an ‘intense “meaty” flavour’

The vegan steak bake is excellent. Despite being exceptionally hot it was delicious – full of an intense ‘meaty’ flavour.

Its one downside is it lacks a bit of the texture of steak – more of a mince – but it is packed with flavour and the texture is not enough to knock its grade, in my opinion.

If you gave it to a devote anti-Quorn carnivore there’s no way they would be able to tell its vegan and it’s a closer analogue to the meat-filled version than the vegan sausage roll is to its meaty relative – both big positives.

I have no idea how they make the pastry without dairy but it was also very good.

A big win for Greggs, from a big Greggs fan. 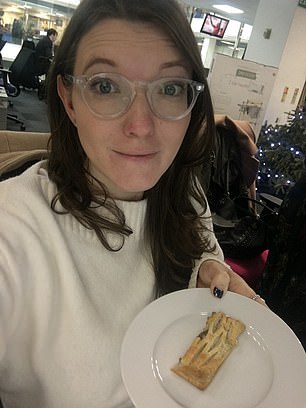 I’ve long been a huge fan of Greggs, as well as being vegetarian, so I was delighted when I heard that the bakery were releasing a vegan steak bake.

And I’ve got to say, it does NOT disappoint.

I enjoyed the peppery flavour of the bake and the moist gravy filling, although my bite seemed to lack a little of the Quorn filling promised.

I’m not sure it deserves a full 5/5 rating, because the puff pastry felt a little greasy, but all-in-all it was a delicious baked treat, and one I’d definitely tuck into again.

It’s not bad – I was a bit disappointed that the ‘steak’ was just mince. I much prefer the vegan sausage roll which I don’t think tastes that much different from the original porky version, except for less buttery pastry.

Likewise, the pastry on the steak bake was not as buttery as the original but the filling was a bit average – all I could taste was salt and gravy granules, and maybe a slight hint of carrot, which I might have just imagined.

I love Greggs but I don’t think I’ll be buying this on my next visit – unless I’m in one of my “I feel guilty about eating cows” moods. 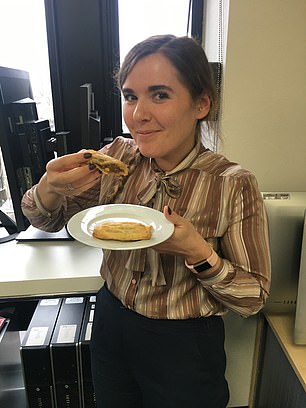 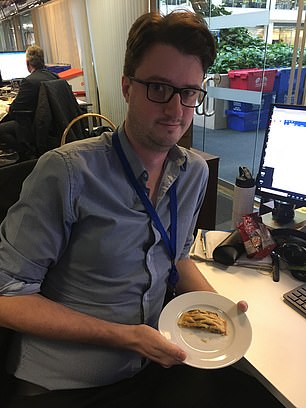 Terri-Ann (pictured left) said the ‘pastry was lovely and soft and wasn’t flaky’, while Jonathan (right) felt disappointed by Greggs’ offering and admitted that he likely wouldn’t buy it

Pastry was lovely and soft and wasn’t flaky – which is often an issue with other baked goods. The filling was rich and was moist.

There didn’t seem to be much of the meat free chunks in the filling though and most of it seemed to have been taken up by the gravy-like substance. 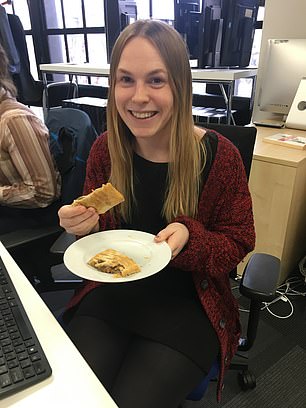 I think the meat free substitute was more of a mince texture than that of chunks of it.

I felt it was a little bit salty, but one of the good things about this is that it didn’t leave a bad/weird taste in your mouth like lots of other meat-free products often do.

After all the hype of the vegan sausage roll, I had high hopes for the meat-free steak bake.

And as soon as I’d taken the first bite I knew Greggs hadn’t compromised on flavour – it was well-seasoned and still tasted meaty.

I’ve never tried the meat steak bake, but I’m not sure I could tell the difference. I’m looking forward to trying all the other Veganuary treats, but they’ve got a lot to live up to now.

A Greggs spokesman said: ‘Greggs has finally put an end to months of speculation by confirming the drop of its Vegan Steak Bake which hits shops today.

‘The new Vegan Steak Bake means that the UK’s vegans, flexitarians and Meat-Free Monday advocates can enjoy an alternative to one of Greggs’ iconic menu items.

‘The Vegan Steak Bake has been created to mirror some of the original Steak Bake’s classic features, including 96 layers of light and crisp puff pastry, but instead is made with Quorn pieces, diced onions and a gravy filling.’

How does Greggs’ vegan competition measure up? FEMAIL put Subway’s MEATLESS meatball marinara to the test…

Subway has today unveiled a vegan version of its much-loved meatball marinara sandwich, becoming the latest chain to jump on the ‘Vegananuary’ bandwagon.

The sandwich is a plant-based take on Subway’s signature meatball marinara, which is filled with meatballs, cheese and oozing tomato sauce.

But just how does the sub – which comes with vegan cheese and ‘meatless’ meatballs – measure up?

Here, five MailOnline reporters put the sandwich to the test…

As a vegetarian I’m always seeking new meatfree food on the high street – so I hate to admit that I’m really disappointed with this subway. 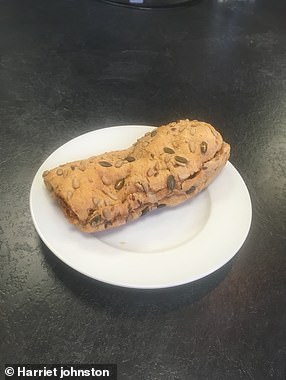 Many of the tasters were left bitterly disappointed with the meatball sub, which had an average rating of 2/5

But the meatballs that are hidden within are dry, and there’s a serious lack of sauce. Meanwhile the vegan cheese is also repulsive in flavour.

This sandwich was poor from the start, it’s not one that I’ll be trying again.

It tastes like what I would imagine a sandwich filled with canned ravioli would taste like – sweet, soggy, and wrong.

Those who wish to have the taste of meat will be bitterly disappointed. There are much better vegan faux-meat products to try out there.

The key thing I noticed about the vegan Meatball Marinara was the lack of tomato sauce. This is usually such a key component in the meat version, but the stingy coating meant the sub felt really dry.

The meatball itself was relatively flavoursome, thanks to a good mix of spices, and the cheese helped liven up the rest of it, even if it did taste a bit like the cheap plastic-esque squares you buy from the supermarket. 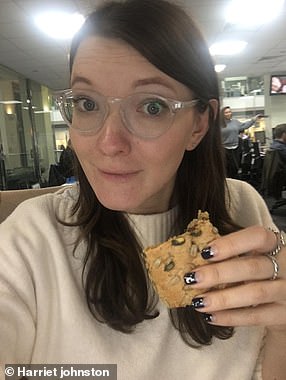 Vegetarian Harriet said she didn’t like the bread to filling ratio, and called the meatballs ‘dry’ and vegan cheese ‘repulsive’

I’m not sure if the bread itself is vegan – if it is it was good as I couldn’t really tell the difference and enjoyed the mix of seeds.

I’m not sure I’d rush out and buy this for a lunchtime treat, but it’s good to have Vegan-uary options if you get desperate.

I’m not a big carnivore and would never eat a regular meatball sub, so I was eager to see if the vegan version could tempt me.

Unfortunately, you could tell that the ‘meatballs’ were dry just by looking at them, which was not a good start, and my suspicions were confirmed as soon as I took a bite. They were also pretty tasteless too.

This sandwich definitely needs much more sauce to give it flavour, but the bread seemed quite limp, so I can see why adding extra would have made it all too soggy.

The vegan cheese had an unappealing glue-like consistency too. I can imagine fans of the original version feeling very cheated.

As a keen eater of all things vegan and vegetarian, I was looking forward to trying this plant-based sub. But I was severely disappointed.

The meat-free treat lacks any real flavour and is a bland offering that certainly fails to mimic the original.

While it might look the part, the savoury snack forgoes any real sauce, despite the traditional meatball marinara being doused in a thick, tomato-based one.

All in all, I wouldn’t be buying this in the future.

The high street goes vegan! From a no-chicken KFC burger to McDonald’s dippers – will YOU be reaching for plant-based treats? 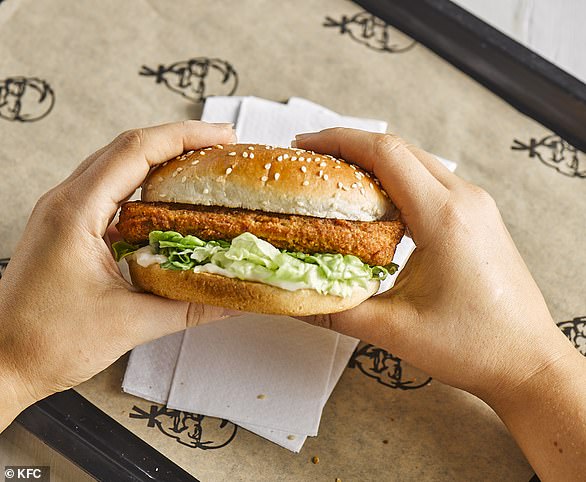 KFC’s vegan offering, pictured above, looks like a fried chicken burger but the fillet is replaced with Quorn

On Thursday KFC released a vegan burger, made with a Quorn fillet, lettuce and vegan mayonnaise.

It uses the same blend of 11 herbs and spices as the chain does for its chicken options. KFC bosses claim it boast the same flavour, but with no meat.

Ira Dubinsky, Innovation Director at KFC in the UK and Ireland said: ‘The Colonel was all about welcoming everyone to his table – now vegans, flexitarians and our fried chicken fans can all enjoy the taste of our Original Recipe together.

‘We’ve worked hard to perfect the flavour and make a Vegan Burger the Colonel would be proud of. It’s the same flavour of KFC, just with zero chicken.’ 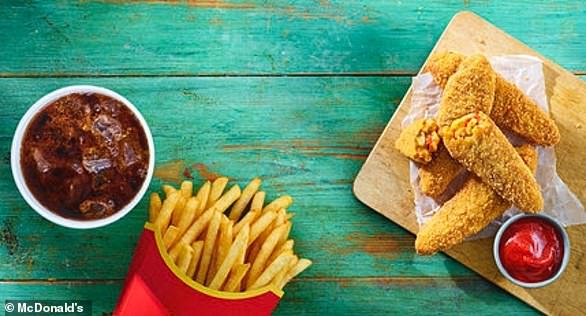 For flexitarians, vegetarians, vegans or those looking to make more meat-free choices during ‘Veganuary’, McDonald’s will be offering their first ever fully vegan meal from today.

The new Veggie Dippers – which have been approved by The Vegetarian Society and certified as vegan compliant as well as gluten free – are available as both an adult meal and Happy Meal.

They are made with red pepper, rice, sundried tomato pesto and split peas surrounded by light and crispy breadcrumbs.

The dippers are now a permanent menu item so will remain available even after ‘Veganuary’ ends.