BEIRUT — Residents of Beirut awoke to a scene of utter devastation on Wednesday, a day after a massive explosion at the port sent shock waves across the Lebanese capital, killing at least 100 people and wounding thousands.

Smoke was still rising from the port, where huge mounds of grain gushed from hollowed-out silos. Major downtown streets were littered with debris and damaged vehicles, and building facades were blown out.

An official with the Lebanese Red Cross said at least 100 people were killed and more than 4,000 were wounded. The official, George Kettaneh, said the toll could rise further.

Scores of people were missing, with relatives pleading on social media for help locating loved ones. An Instagram page called “Locating Victims Beirut” sprang up with photos of missing people, and radio presenters read the names of missing or wounded people throughout the night. Many residents moved in with friends or relatives after their apartments were damaged and treated their own injuries because hospitals were overwhelmed.

It was unclear what caused the blast, which appeared to have been triggered by a fire and struck with the force of an earthquake. It was the most powerful explosion ever seen in the city, which was on the front lines of the 1975-1990 civil war and has endured conflicts with neighboring Israel and periodic bombings and terror attacks.

Lebanon was already on the brink of collapse amid a severe economic crisis that has ignited mass protests in recent months. Its hospitals are confronting a surge in coronavirus cases, and there were concerns the virus could spread further as people flooded into hospitals. 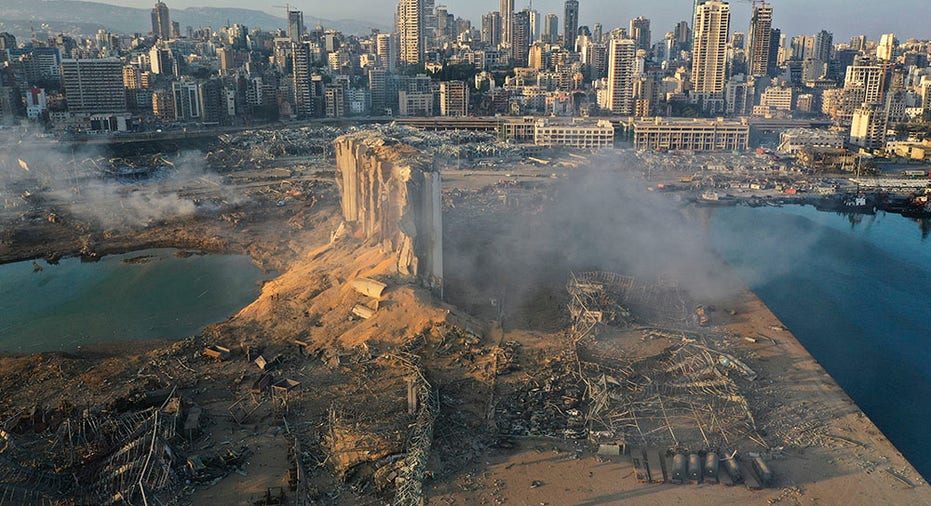 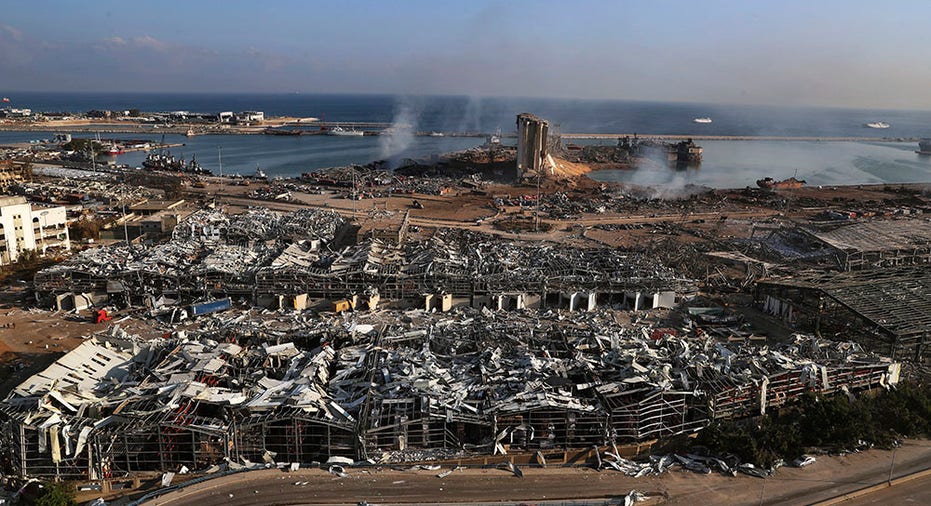 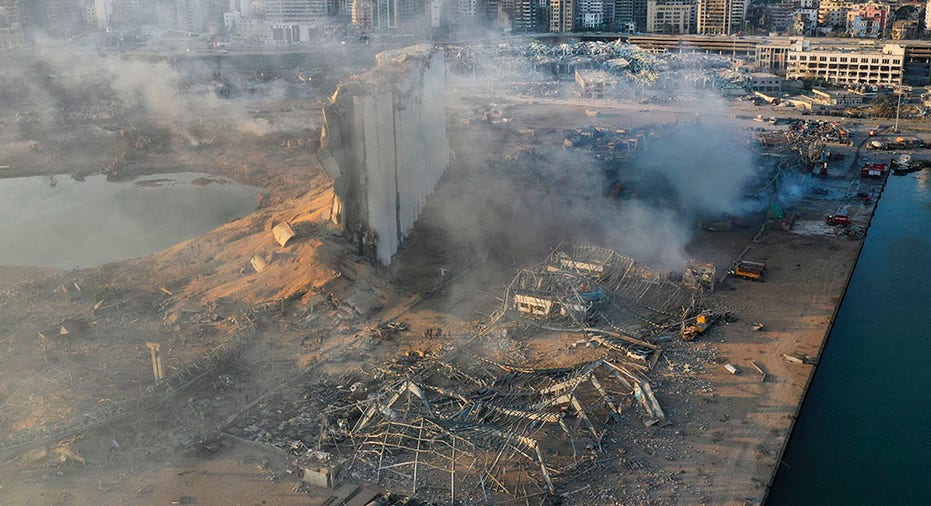 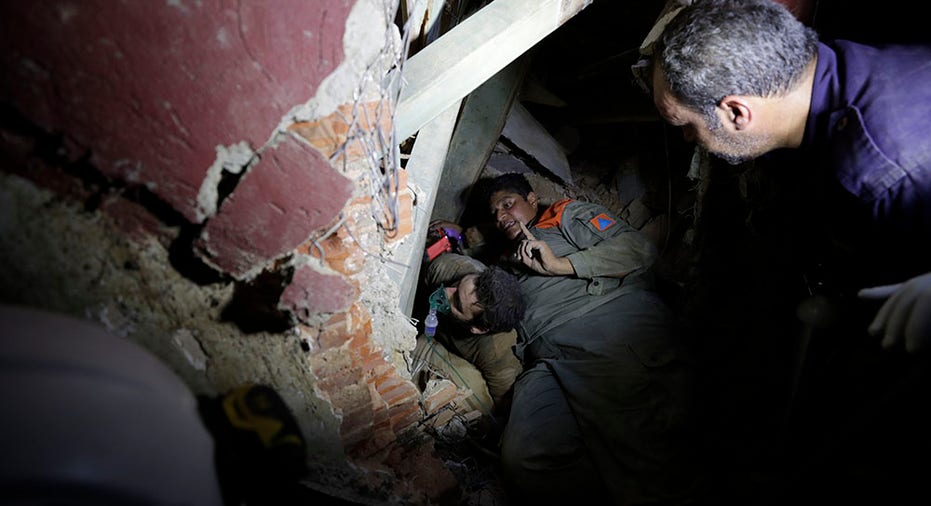 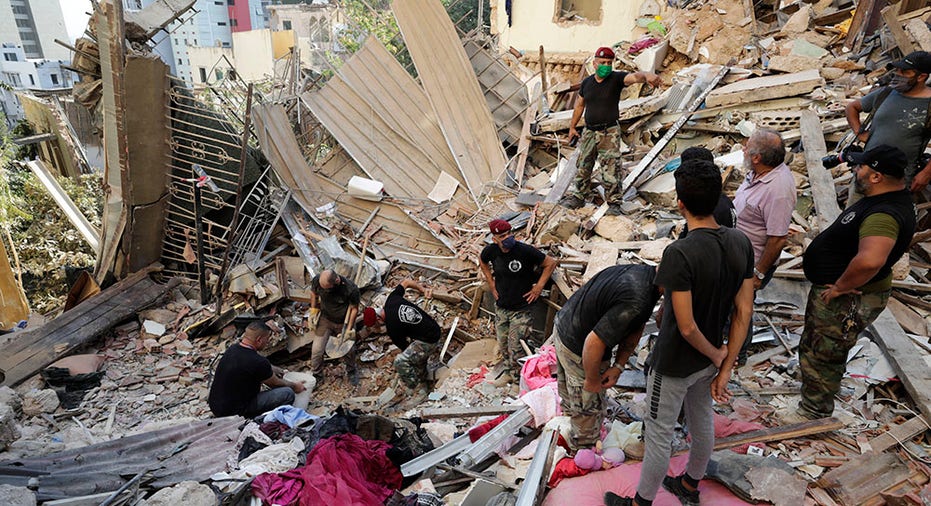 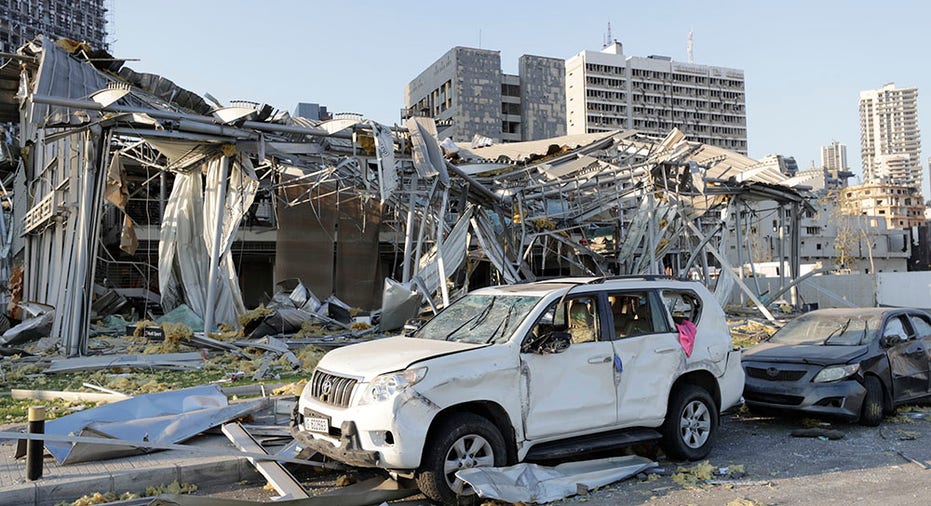 A drone picture shows the scene of an explosion at the seaport of Beirut, Lebanon. (AP Photo/Hussein Malla)

Saint George University Hospital, one of the major private hospitals in Beirut which had been receiving COVID-19 patients, was out of commission Wednesday after suffering major damage. A physician who identified himself as Dr. Emile said 16 staff and patients, including four nurses, died in the blast. He declined to give his last name out of privacy concerns.

Interior Minister Mohammed Fahmi told a local TV station that it appeared the blast was caused by the detonation of more than 2,700 tons of ammonium nitrate that had been stored in a warehouse at the dock ever since it was confiscated from a cargo ship in 2014.

Ammonium nitrate is a common ingredient in fertilizer but can also be highly explosive. It was used in the Oklahoma City bombing in 1995, when a truck bomb containing 2,180 kilograms (4,800 pounds) of fertilizer and fuel oil ripped through a federal building, killing 168 people and wounding hundreds more.

There is no evidence the Beirut explosion was an attack.

Videos showed what looked like a fire erupting nearby just before, and local TV stations reported that a fireworks warehouse was involved. The fire appeared to spread to a nearby building, triggering the explosion and sending up a mushroom cloud.

Security forces cordoned off the port area on Wednesday as a bulldozer entered to help clear away debris. A young man begged troops to allow him to enter and search for his father, who has been missing since the blast occurred. He was directed to a port official who wrote down his details.

In Beirut’s hard-hit Achrafieh district, civil defense workers and soldiers were working on locating missing people and clearing the rubble. At least one man was still pinned under stones from an old building that had collapsed. Volunteers hooked him up to an oxygen tank to help him breathe while others tried to free his leg.

The blast destroyed numerous apartment buildings, potentially leaving large numbers of people homeless at a time when many Lebanese have lost their jobs and seen their savings evaporate because of a currency crisis. The explosion also raises concerns about how Lebanon will continue to import nearly all of its vital goods with its main port devastated.

Prime Minister Hassan Diab, in a short televised speech, appealed to all countries and friends of Lebanon to extend help to the small nation, saying: “We are witnessing a real catastrophe.” He reiterated his pledge that those responsible for the disaster will pay the price, without commenting on the cause.

There is also the issue of food security in Lebanon, a tiny country already hosting over 1 million Syrians amid that country’s yearslong war.

Drone footage shot Wednesday by The Associated Press showed that the blast tore open a cluster of towering grain silos, dumping their contents into the debris and earth thrown up by the blast. Some 80% of Lebanon’s wheat supply is imported, according to the U.S. Agriculture Department.

Estimates suggest some 85% of the country’s grain was stored at the now-destroyed silos.

Lebanon’s state-run National News Agency quoted the Raoul Nehme, the minister of economy and trade, as saying that all the wheat stored at the facility had been “contaminated” and couldn’t be used. However, he insisted Lebanon had enough wheat for its immediate needs and would import more.

Several countries have pledged aid in the aftermath of the blast, with even Israel offering humanitarian assistance. The two countries have been in conflict for decades, and Israel fought a 2006 war with the Hezbollah militant group.

The tiny Mediterranean nation's economic crisis is rooted in decades of systemic corruption and poor governance by the political class that has been in power since the end of the civil war. Lebanese have held mass protests calling for sweeping political change since last autumn but few of their demands have been met as the economic situation has steadily worsened.

Beirut's port and the customs authority are a notoriously corrupt. Like nearly all public institutions, they are controlled by Lebanon's political factions, including the Hezbollah militant group.