The federal government is being urged to use Australia’s friendship with the United States to secure supplies of the Pfizer vaccine, after a total reliance on Europe for about 4.4 million doses shipped to Australia by the company so far.

Labor leader Anthony Albanese called on Prime Minister Scott Morrison to “aggressively” increase the vaccine supplies as the greater Sydney region enters its third week of lockdown, with only 10 per cent of eligible people fully inoculated with two doses nationwide. 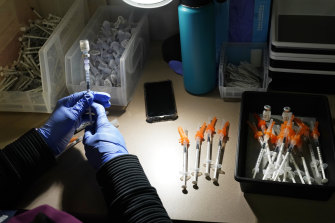 A registered nurse fills syringes with Pfizer vaccines at a COVID-19 vaccination clinic. The latest alarming coronavirus variant, the delta variant, is exploiting low global vaccination rates and a rush to ease pandemic restrictions, adding new urgency to the drive to get more shots in arms and slow its supercharged spread.Credit:AP

Pfizer has confirmed to The Sydney Morning Herald and The Age that all the doses shipped to Australia so far have come from Europe. Diplomatic sources, who spoke on condition they not be named, said the amount has reached 4.4 million doses in deliveries, distinct from jabs administered.

US President Joe Biden moved in May to allow vaccine exports from Pfizer’s US manufacturing facilities to Canada and Mexico, while also announcing a humanitarian program to send Moderna vaccines to Indonesia, but his administration has imposed strict controls on exports to other countries.

“We need to aggressively increase supply, we need to talk to our friends in the United States about Pfizer and Moderna,” Mr Albanese told the ABC’s Insiders program on Sunday.

“Canada and Mexico have been able to get additional vaccines.

“We need to be moving with producing mRNA vaccines right here as well. The key is the supply of the vaccine, that’s at the heart of the problem here.”

Asked whether it was feasible for Australia to get an increase in vaccines ahead of countries with more cases and deaths per day, Mr Albanese argued that Australians needed more volume.

“It’s a matter of getting access to more supply sooner, and we need to do that,” he said. “We saw recently South Korea get access to the excess Pfizer vaccines from Israel.

“If you fail to plan, you’re planning to fail. And that’s what’s happened here. We didn’t do enough deals with enough pharmaceutical companies to get enough vaccines soon enough.

“The government was too busy out there advertising itself saying we’re at the front of the queue. We’re last in the developed world for the rollout of the vaccine.”

Mr Morrison said on Friday he expected 4.5 million doses from Pfizer in August, up from 2.8 million in July and 1.7 million doses in June.

The higher weekly rate is expected to continue in September before a boost to supply in the final three months, leading to what the government calls a “sprint” to offer all Australians over the age of 16 at least one dose by the end of the year.

Australia has been relying on supplies from the European Union to meet rising demand for Pfizer vaccines after the Australian Technical Advisory Group on Immunisation (ATAGI) declared it the preferred option for everyone under 60, limiting the use of AstraZeneca.

About 4.4 million Pfizer doses have come from the EU and none from the United States.

The Australian deliveries compare to 29 million Pfizer doses administered so far in the United Kingdom, one of the countries that reveals vaccinations by brand. The population of the UK is about 67 million compared to the Australian population of 25 million.

Stay across the most crucial developments related to the pandemic with the Coronavirus Update. Sign up to receive the weekly newsletter.