Australia’s greenhouse gas emissions continued to decline at the end of 2020 as an acceleration of the decarbonisation of the electricity sector outweighed a revival of pollution from transport and industry, according to analysis by consultants.

In the final quarter of last year, emissions were projected to come in at 123.7 million tonnes of carbon-dioxide equivalent. That national tally was down 4.7 Mt CO2-e down on the previous three months as a surge renewable energy supply crimped demand for coal-fired electricity, consultancy group Ndevr Environmental said. 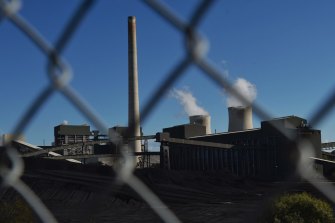 The on-going drop in emissions from coal-fired power plants has been propelling lower carbon pollution across the economy.Credit:Nick Moir

The projections come about two months earlier than the federal government’s official emissions statistics and are based on the same modelling. They also show that if trends since 2015 continue, Australia’s pledge to cut 2005 level emissions by 26-28 per cent by 2030 won’t be reached at the lower end of the range until 2033 and 2036 for the upper end.

A spokesman for Energy Minister Angus Taylor said the government “won’t pre-empt” the release of official data which for the December quarter must be released by the end of May.

“Since 2005, Australia has reduced emissions faster than the OECD or G20 average,” he said.

Transport emissions in the final three months of 2020 were almost back to the year-earlier levels as vehicle use picked up from significant reduction in the two previous quarters.

Pollution from industry also bounced back to be about half a million tonnes higher than for the final quarter of 2019, Ndevr said.

The electricity sector, in other words, continues to contribute the bulk of any reduction in the nation’s emissions. The National Electricity Market, which supplies about 80 per cent of Australia’s population, boasted a 29 per cent share of renewable energy in the December quarter, beating the previous record set three months earlier by 3 percentage points.

In the final months of last year, NSW generated 24 per cent of its electricity from renewables, beating that state’s previous record set a year earlier by five percentage points.

Renewables in Victoria reached a 30.5 per cent share of the electricity market in the December 2020 quarter, also beating its previous record share set in the preceding three months by five percentage points. Rooftop solar generation in the state was 83 percent higher than the September quarter.

Most Viewed in Environment