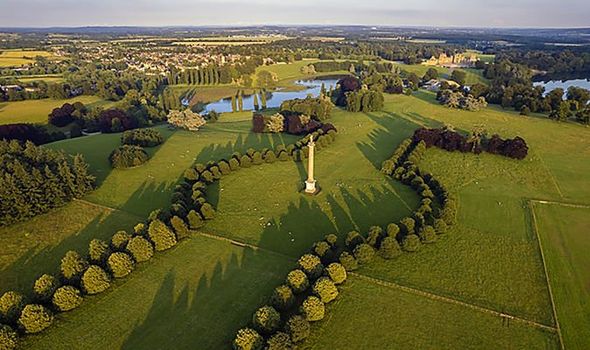 Aiming to capture over 22,000 tons of CO2 over the next 25 years, the project also involves the creation of a forest school, wildflower meadows and more than nine miles of public footpaths. The Daily Express helped plant some of the first of the 270,000 trees needed. A one-year-old oak sapling, descended from the mighty trees on nearby ancient woodland, is one of 30,000 being planted this month at Blenheim Palace, Oxfordshire.

There, the new woodlands will take root on 150 hectares of sprawling grounds – and comprise 28 different, deliberately diverse species.

The Express has called for spaces to be given back to nature across the country as part of our Green Britain Needs You campaign.

“It’s being done across swathes of farmland, which have historically produced wonderful yields and have been managed exceedingly well,” she said.

“But I think there has always been talk that we need to potentially change some of the way we farm to help improve the biodiversity of our land, reduce soil erosion and encourage native species back into the area.”

Rachel hopes the project, in partnership with construction firm Morgan Sindall, will connect local communities with the natural environment.

Nathan Fall, former banker turned forester at Nicholsons, told how the types of new trees for planting were selected with climate change in mind.

He said: “We’re looking at what’s growing two or three degrees south from here, like France, continental Europe and the southern coast of Britain.

“We’re bringing up species from there in the form of sycamore. And hornbeam is not the tree that you find a lot around here, you find it a lot in Kent, and along the south coast, we’re putting a lot of that into the mix. But we are also using species that have been here for a long, long time.”

It is the first tree planting ordered by the Forest Canopy Foundation ‑ a collaboration of private sector forestry firms who have joined forces to increase woodland creation in England.

Not-for-profit Grown in Britain will carry out regular independent auditing of the scheme to measure its natural capital gains, including cleaner air and water, as well as richer soil.

The total area of woodland in the UK is estimated to be 3.23 million hectares, some 13 percent of all land.

Nathan believes the Blenheim project could set a template “for a much wider push on woodland creation” in England, adding: “We need to get landowners willing and able to surrender land, knowing that they’re making a good long-term decision.”

Visits to woodlands save £141million on costs associated with mental health illnesses in England, the Government said last week.