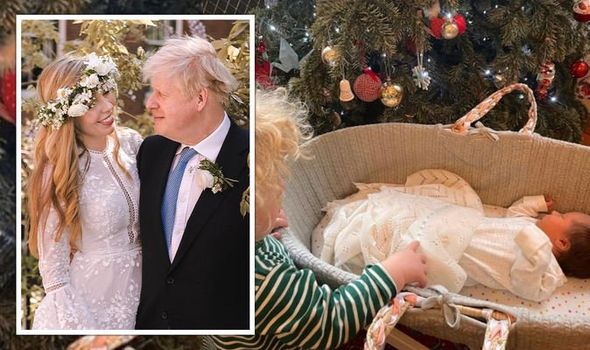 Carrie Johnson shared the first photo of their daughter on social media announcing the baby’s name.

The Prime Minister’s wife posted a snap of little Romy sleeping in a moses basket next to her big brother Wilfred.

Carrie explained the name Romy is after her aunt Rosemary.

Iris is the second middle name and it means rainbow, and Charlotte is a third name after Mr Johnson’s late mother.

But what does the name say about their new baby girl?

The name Rosemary is a girl’s name of Latin origin that means “dew of the sea, or rosemary (referring to the herb)”.

The name is formed by two Latin terms: “Ros” meaning ‘dew’ and “Marinus” meaning “of the sea”.

The ancient legend says Rosemary was draped around Aphrodite when she rose from the sea.

It is considered beneficial for memory and a symbol for faithful lovers.

Carrie and Boris Johnson chose to give her the nickname “Romy” which is a very popular name in Germany.

Iris, on the other hand, comes from the Greek word Iris, which means “rainbow”.

According to Greek mythology, it was the name of the goddess of the rainbow who delivered messages to the Gods across a rainbow bridge.

The name would translate as “goddess of the rainbow”, according to the mythology.

Finally, Charlotte is the feminine form of Charles.

Her second middle name was chosen for Boris Johnson’s late mother, Charlotte, who Carrie said “we miss very much”.

“There is a great strength of character within persons with the name Rosemary, as well as wisdom, compassion, intuition and high idealism. There is also a great deal of warmth of feeling and love of home, family and friends.”