Home » Lifestyle » Build up childcare around the needs of parents, not childcare centres

The mere mention of childcare policy reminds me of the saying “The road to hell is paved with good intentions”. It is a fairly harsh way of reminding us that good intentions are not enough. Similarly, the phrase “I only meant well” is usually associated with what is generally unsuccessful.

Both the major parties understand the need for affordable and accessible childcare. Between various stints in office by either side we do not seem to have managed yet to get it right. Surely no one disputes that kids need to be looked after when parents are working. That’s easy. It’s what comes after that which is harder. 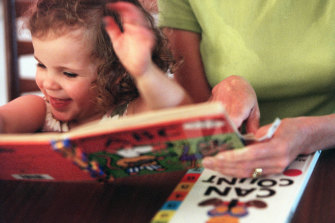 Why can’t parents be trusted to choose childcare that suits their needs?Credit:

When governments regulate it often results in overkill. There are two obvious problems with what happens now. First, childcare is too expensive. Governments wanting to portray themselves as caring bump up the subsidy. We all know what happens next: the price goes up.

The second problem is childcare just doesn’t offer much to workers on variable shifts, night or weekend workers. That’s a significant part of the workforce. Think about it next time you’re in hospital, shopping on the weekend, travelling on the weekend, eating out for dinner … it’s a long list. And these are often the workers most in need of help with childcare. Let me just spell that out. If you are a nurse who works three days a week you will be stung. Here’s why.

Your centre will want you to nominate the days of the week you want. That’s understandable in one way because they’re a business. Never mind that businesses not drinking government support can’t afford to be so dictatorial with their customers.Your hospital roster will not always match those days on a Monday-to-Friday basis but you have to pay for them anyway. Yes, some kids go into childcare because the family has to pay for it, even when Mum isn’t working. Can anyone really suggest that’s a good system? If you’re on night shift, working on the weekend or have to work on a day you haven’t got childcare booked, you’re on your own. If you have three kids, that’s a lot of childcare in effect wasted over time.

A family with a such a shift worker would get much more help if we allocated the same amount of money to them and let them choose how to get their kids cared for. What would be ideal for them is a nanny or carer doing some hours before school, after school or overnight on days that suited you, the customer.

What we’ve got is a system that works for the providers more than the customer.

You might wonder how we got into this mess. It’s not going to be easy to clean it up. Old-fashioned prejudices on both sides of the argument led us to this position. Decades ago there were men who thought women should be at home minding the kids. There wasn’t much thought given to single mums or families where Mum worked because they wanted to give their kids more than was possible on the father's salary alone. These guys just couldn’t or didn’t want to see the enormous social change that was coming.

The other side of this tunnel vision was those who disliked anything they thought might assist the so called “rich”. Tax deductibility of childcare was out of the question because a woman earning more would get more help as the deduction would in all likelihood be from a higher tax bracket. At the same time the idea of assisting with the cost of childcare in the home was unacceptable because only rich people had nannies. It was stupid, blinkered thinking.

We funded a system that relies heavily on centre-based care and proceeded to regulate what was required to attract funding . Surprise number one: whenever the subsidy for childcare goes up, the fees go up. Surprise number two: centre-based care suits bureaucrat nine-to-five hours. It’s not laughably stupid, it’s tragically so. Families are squashed.

One of the dilemmas we face is: what does quality mean? A bunch of politicians and bureaucrats in Canberra decide. What is wrong with letting the parents decide?

A family might prefer that their child is cared for in their home or at a neighbour's or by a family member. The security that familiarity of surroundings or people brings might be their highest priority. Careers and childcare workers would also have more flexibility. What we should have is a system that works for the customer.

Having built an industry addicted to government cash flow, it is going to be hard to undo. There will be difficult decisions and it can’t be done overnight. But undo it we must. We have to progressively put the power back in the hands of the parents. I can think of any greater insult from a government than saying “You are too stupid to be trusted with arranging your children’s childcare”.

Let the parents decide for themselves.