Vaccinated NSW travellers will be able to visit Victoria without quarantining before Melburnians can go to Ballarat under what Health Minister Martin Foley dubbed a transitional anomaly brought on by new travel restrictions.

It comes as an influential scientific modeller said he believes Victoria’s COVID-19 case numbers will continue to rise for weeks instead of peaking ahead of an anticipated easing of restrictions next week.

Following another high tally of 2179 new locally acquired COVID-19 cases on Friday, the state government announced changes to the NSW border rules from Tuesday, which will allow fully vaccinated travellers into Victoria without quarantining, while Melburnians are still prohibited from going more than 15 kilometres from home.

In addition, NSW Premier Dominic Perrottet announced that from November 1, quarantine will not apply to flights into Sydney by fully vaccinated international travellers, who will then be able to move on to destinations such as Melbourne.

If Victoria reaches its 80 per cent double-dose target later than the forecast date of November 1, international visitors could visit regional Victoria before Melburnians.

A number of epidemiologists have been predicting that Victoria has been close to reaching the top of the third wave of infections, but Dr Jason Thompson, a modeller with the University of Melbourne, said Victoria could now miss the window of opportunity for case numbers to flatten or drop.

When the state reaches the 70 per cent fully vaccinated target next week, it will trigger the outdoor reopening of retail and hospitality venues in Melbourne, bringing more opportunities for the virus to spread.

Dr Thompson, who was part of the research team that provided the government modelling to inform the exit from Victoria’s second wave last year, said data showed Melburnians were moving around 20 per cent more than at the height of COVID-19 cases in 2020 – an increase from 5 to 10 per cent since a month ago when there were stricter restrictions.

Travel into Victoria from “red zones” such as Sydney will be allowed from Wednesday for visitors who are fully vaccinated and receive negative tests within 72 hours of leaving home and arriving in Victoria. No requirements will apply to fully vaccinated travellers from “orange zones”, which cover most of regional NSW.

Yet travel rules within Victoria have not shifted and the state’s reopening road map prohibits free travel within the state until the 80 per cent double dose milestone is met, expected by November 1 at the latest. Some forecasts now suggest it could be attained by October 31.

Mr Foley on Friday defended the apparent inconsistencies as “transitional anomalies” that would resolve as Victoria opened up.

“These things will work themselves out as the transition from our current situation, through the road map, to the graduated soft reopening that is set out in the Victorian plan to deliver the national reopening plan,” he said.

Further pressed on the contradictions, Mr Foley said Victoria was still working through the details of NSW’s international borders announcement, which was made 15 minutes before the Health Minister gave the daily COVID briefing.

“I think everyone just needs to take a chill pill,” he said.

Mobility data shows movement has surged in the outer southeast areas of Melbourne, which have emerged as a new COVID-19 hotspot.

On Friday, for the first time in the outbreak, there were more new cases in the southeast (616) than reported in the north (585), the initial centre of the third wave.

The highest increases in movement have been observed along the Mornington Peninsula, with the assumption this is due to people illegally visiting their holiday homes at the weekends.

The modelling group at the University of Melbourne’s transport, health and urban design research lab is now expecting cases to increase through October and into November.

“We’re not at a stage in Victoria where we’re about to reduce interaction between people, we’re actually going to increase it. That’s fine, but it would be difficult to imagine a situation, I think, where doing that would lead to reduced numbers of cases,” Dr Thompson said.

“Vaccinations will help us stop being sick. They may not dampen transmission as much as we hoped.”

The prediction raises more concerns about the impact on the hospital system, which is already under severe strain due to fast-growing numbers of COVID-19 patients, now at 677.

One promising sign though is the rate of hospitalisation, which is significantly lower than it was last year due to the higher proportion of younger people getting infected. Around 3.5 per cent of active cases are hospitalised today, compared to around 7.5 per cent at the peak of the second wave.

Southern Tasmania became the latest area ensnared by an outbreak on Friday, sent into a three-day lockdown after a traveller from Sydney escaped hotel quarantine and spent 18 hours in the community, including visiting a supermarket, before testing positive.

Mildura’s lockdown was also extended into a second week after another 34 cases were recorded.

Qantas brought forward the restart of international flights by two weeks to November 1 in response to NSW’s quarantine announcement, which Prime Minister Scott Morrison also welcomed, albeit with a caveat.

“We are not opening up to everyone coming back to Australia at the moment. I want to be clear about that,” Mr Morrison said. 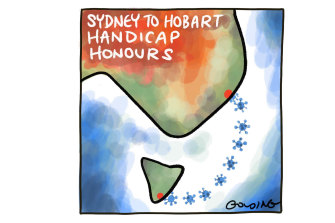 The Victorian government has not confirmed when international flights will resume into Melbourne, although the Prime Minister has stated his intention to reopen borders into states once they hit 80 per cent double dose coverage.

Victorian Chamber of Commerce and Industry chief executive Paul Guerra said he expected demand to be high for businesses to ramp up travel between Melbourne and Sydney, despite the existing regulations around testing.

“[Intrastate] business travel will take time to get to pre-pandemic levels but there is certainly an appetite from the business community to get going,” he said.

“While the Victorian Chamber would have preferred to see the development sooner than 80 per cent, the fact that we are predicted to hit that target ahead of time means there’s not too long to wait now.”

“I think of people coming from overseas, being able to come to Victoria and see people all over the state and yet I can’t see my father on the Peninsula,” he said.

“I think that is a very strange piece of policy decision-making by this government.” 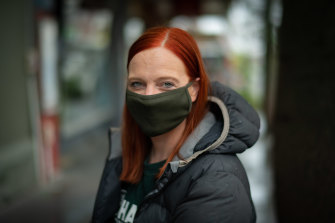 Bree Stewart has not seen her partner who is living in NSW for four months due to the border restrictions. 15 October 2021. The Age News. Photo: Eddie Jim.Credit:Eddie Jim

The eased border provides good news for separated friends, family members and partners, such as long-distance couple Bree Stewart and Louise Mole, who haven’t been able to see each other for three months.

Ms Stewart, a mental health clinician, moved from Sydney to Melbourne ahead of Ms Mole, when Victoria was thrown into lockdown.

“I’ve been managing trying to get our lives in order ever since. We were both really rapt about the announcement,” the 33-year-old said.

She said she missed the couple’s dog Nash and Ms Mole, 33, who will move to Melbourne in the coming weeks.

“If I’m honest, I think she misses the dog more than me!” Ms Mole joked.