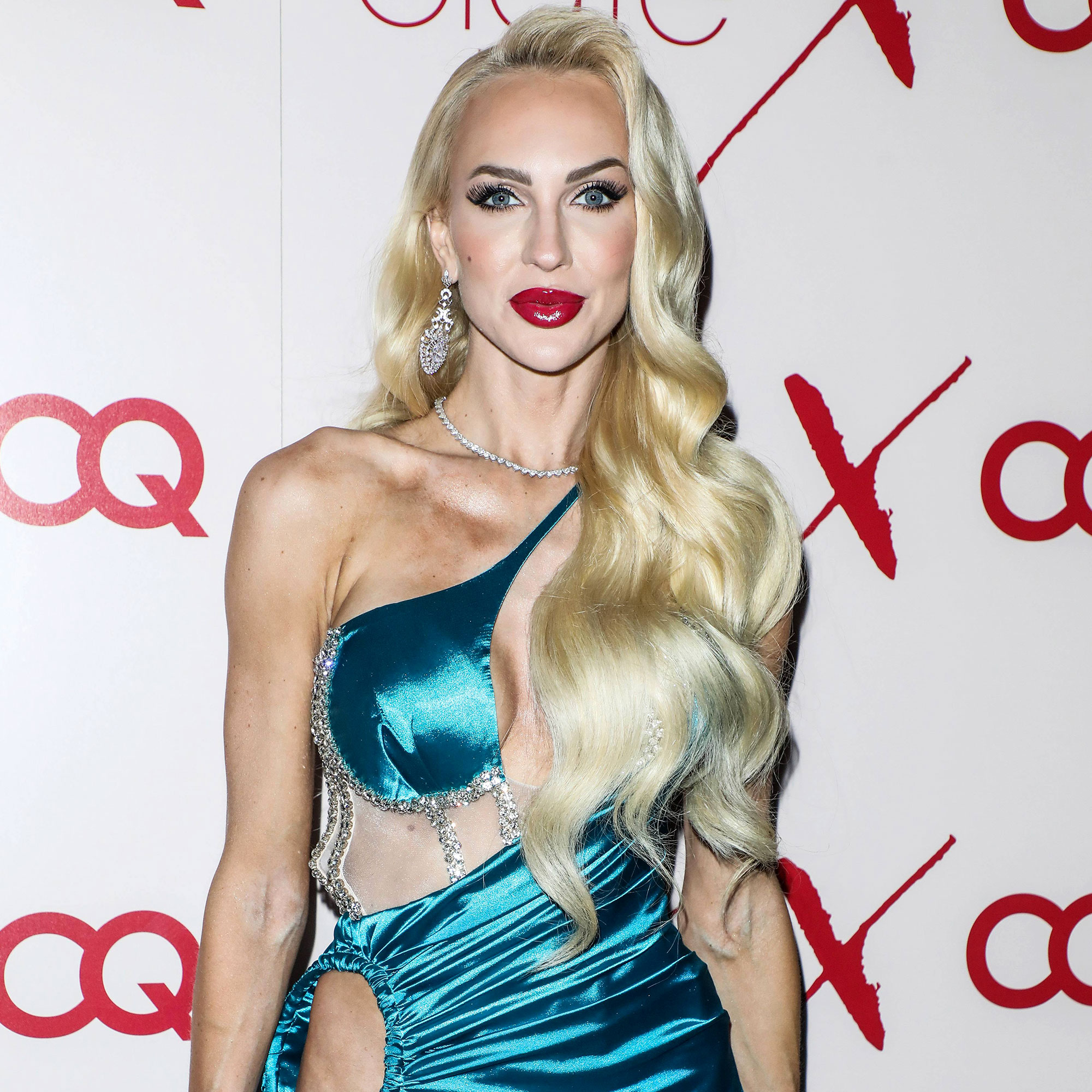 Ready with receipts. Christine Quinn is continuing to clear the air surrounding how her pregnancy was portrayed on season 4 of Selling Sunset — and she hasn’t held back.

The Claws Are Out! Biggest ‘Selling Sunset’ Feuds

The 33-year-old reality star welcomed her son, Christian, in May with husband Christian Richard. After the latest season of the Netflix hit premiered on Wednesday, November 24, fans marveled at Quinn’s tiny baby bump, but the timing of one particular scene caused confusion among viewers.

“Christine but when we watched selling sunset, the yoga scene was after you [gave] birth. Love your vibe on the show but just a curious question. Is it edited wrong?” one Twitter user asked on Sunday, November 28, to which the Texas native replied, “The one with Davina? Yes I was 100 percent pregnant.” 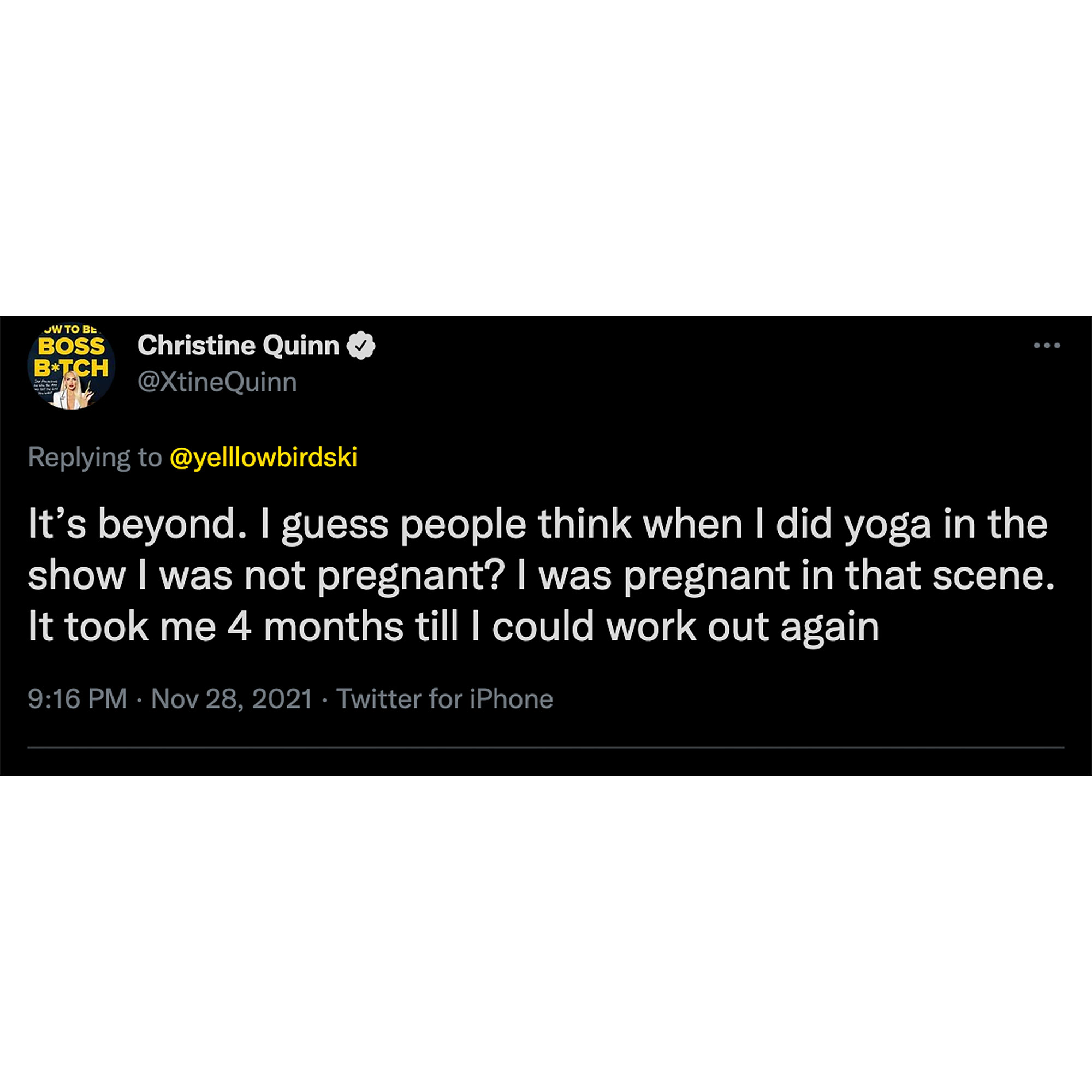 In another tweet, the How to Be a Boss Bitch author claimed, “[It was] edited wrong. I was pregnant in that scene.”

When one follower argued that those questioning Quinn’s pregnancy “need to get a grip,” the model agreed. “It’s beyond,” she responded. “I guess people think when I did yoga in the show I was not pregnant? I was pregnant in that scene. It took me 4 months [before] I could work out again.”

‘Selling Sunset’ Cast’s Love Lives: Who the Netflix Stars Are Dating Off Screen

Quinn reminded social media users that the reality show was filmed in the span of six months and retweeted a fan’s post regarding the speculation, which included photo evidence that the yoga class was captured during the star’s pregnancy. In two pictures, Quinn posed in the same athletic outfit she wore in the workout scene, showing her bare midriff and baby bump.

Earlier on Sunday, the realtor shared a screenshot of a DM via her Instagram Story, showing a private message that read, “Why did you fake your pregnancy? It’s totally OK to admit to having a surrogate but don’t set unrealistic expectations for PP moms when you didn’t even carry the baby yourself. It’s deceitful and a shame.”

Quinn captioned the image, “K y’all are beyond f–king sick.”

Since giving birth to her baby boy, Quinn has been candid about the little one’s frightening arrival, telling costars Vanessa Villela and Amanza Smith about her emergency surgery in a season 4 episode.

Everything to Know So Far About ‘Selling Sunset’ Season 5

She later told her Oppenheim Group colleagues that she was “flatlining” during the delivery and that the experience gave her a new perspective when it came to office drama.

While settling into parenthood, Quinn exclusively told Us Weekly that she and her husband “definitely have been talking about” continuing to expand their family.

“Normally, right away I’d be like, ‘Yeah, let’s go,’ but [my son’s birth] left me a little hesitant,” Quinn confessed in June. “I really, really want to know I’m healed and the time is right before we’re thinking about it. But it would be nice. … Whatever my body went through and what women deal with when they have babies is really crazy.”