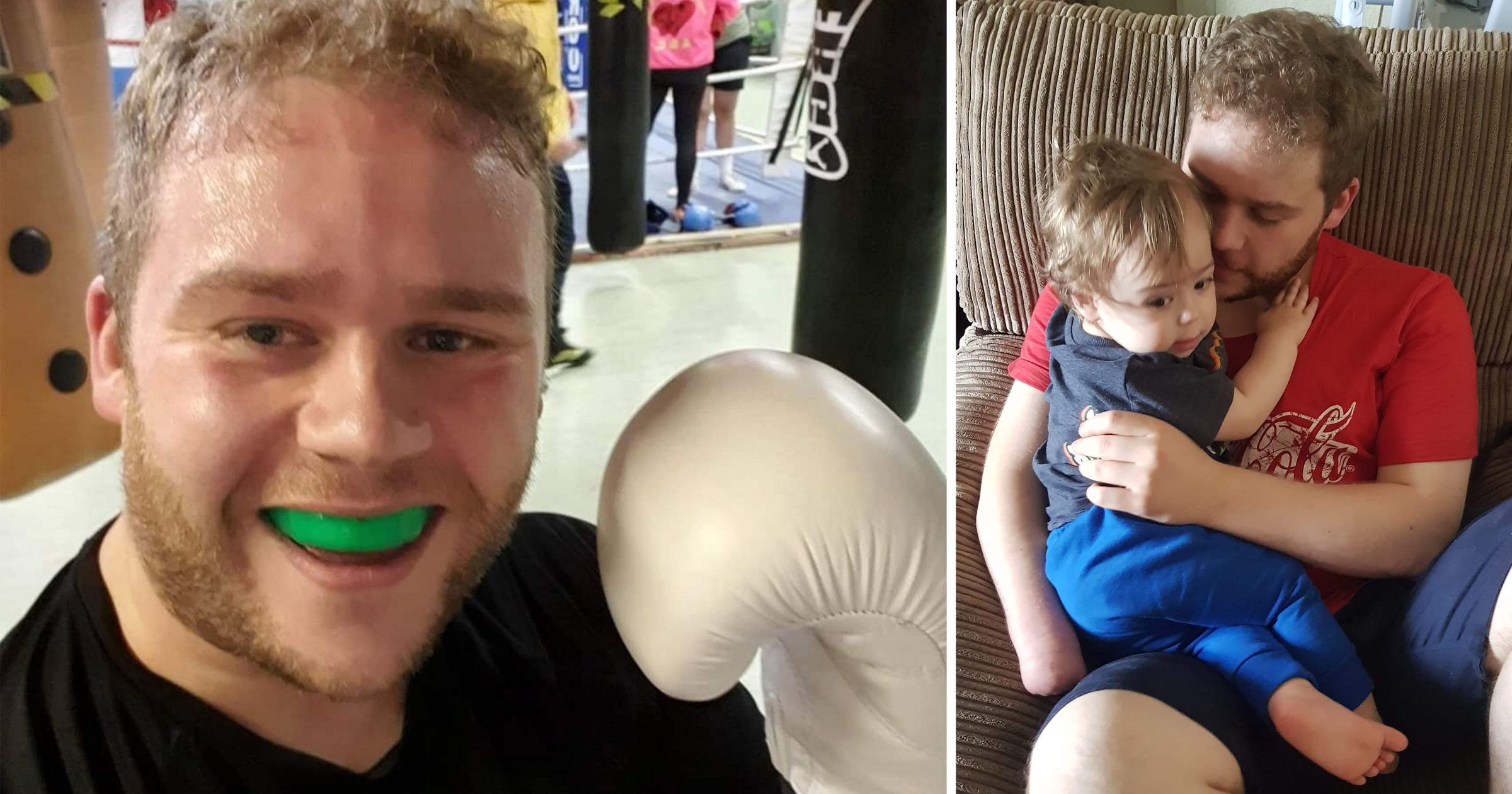 Next time you think you’re joining the mailing list to an event – be sure to double check that you’re not actually signing up to take part.

Yes, it might sound ridiculous but that’s exactly what happened to Ben Lewis, a dad from Neath in Wales, when he thought he was registering for tickets to a boxing match organised by Ultra White Colour Boxing (UWCB).

The 29-year-old had hoped to attend the charity match and watch from the sidelines – however, he soon found out that he had accidentally entered himself to fight.

After realising his mistake, Ben decided to go ahead with it –and soon found himself training for the big day, to learn ‘the basics.’

The dad was born with only one hand, and so decided to take part using a boxing glove duct-taped to his arm.

An amateur rugby player, Ben has never taken part in anything like this before but has said that it was something he’d always wanted to do – and he hoped to make his young son, Evan, proud.

Organised to raise money for Cancer Research, the match provided free training for those who were taking part and so, Ben got started – preparing to fight in front of hundreds of people, in just eight weeks time.

Ben has said that he appreciated the way he was treated by the organisation, and the trainers – who didn’t treat him any differently for having a disability.

‘One trainer in particular helped me a lot, Andrew Fry, whose nickname is Cockles – he does quite a bit of boxing,’ Ben said.

‘All of my sparring sessions were against him and he’s light on his feet which does test you quite a lot. He had no intention of making any training session easy even though I was born with one hand.

‘There were no concessions for me – they treated me the same as everyone else.’

Ben said that the trainers pushed him hard, and he was told that they had never trained anyone with a disability before.

‘With boxing, you would assume it’s a two-handed sport but I have managed to do it a different way,’ he said.

‘For the first four or five weeks, I was keeping the boxing glove on with duct tape but it started irritating my skin so then I wore a sleeve going over the top of my arm,’ he continued.

The dad said that, initially, he had mixed reactions from his family. ‘But once they knew I was going through the training and could see how much I was enjoying it, they started to get excited,’ he said.

‘I learnt the basics of boxing, stance, fitness and a lot of aerobic exercises – just anything that can get you out of breath. I never left rugby training more tired physically and mentally than boxing training. It is challenging but rewarding, definitely.’

After weeks of training, Ben took part in the fight – making his family proud, including his three-year-old son, Evan.

The vest that he wore to fight in saw him nicknamed ‘Benjamin – Bionic Ben Lewis.’

But in the end, he had to concede as his glove kept slipping off.

‘It was three two minute rounds and I made it to the third round but the silicon kept slipping off because of the sweat,’ he explained.

‘The referee asked if I was OK to continue but I couldn’t keep the glove on so the other guy won.

‘He was a good fighter anyway.’

Ben has said that although he didn’t go there to lose, he is ‘proud’ of himself for taking part. A condition of entering the charity match is raising at least £50 for Cancer Research. Ultra Events, who run the fights, have raised £23 million so far.

‘I lost three grandparents to cancer but they all died before I was born or when I was very young,’ he said. ‘I did it for everyone who at some point has been affected by cancer – anyone and everyone really who needs the help.’

Ben enjoyed the experience so much that he has decided to keep boxing in the future.

The next Ultra White Collar Boxing event will take place in Swansea on April 2 2022.