Home » Daisy Turnbull: I didn’t realise how depressed my father was

It’s reasonable to ask what writer and teacher Daisy Turnbull would know about risk taking, given the title of her first book: 50 Risks to Take With Your Kids. 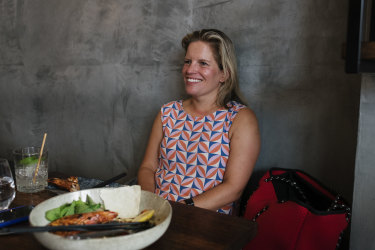 She was raised in Sydney’s eastern suburbs, Paddington (where she still lives) for her first decade, then a harbourside mansion in Point Piper, in the blue ribbon seat of Wentworth, where her father was the local member for 14 years.

She went to one of the best private schools in Australia, Kincoppal-Rose Bay, studied arts/commerce at the University of Sydney and now, at 36, is director of wellbeing at the exclusive St Catherine’s School at Waverley.

But she’s also a recently separated single mother-of-two, a Lifeline counsellor, who took up knitting and crocheting to take her mind off the emotional roller-coaster while she and her former army officer husband James Brown struggled to have children via several rounds of IVF.

She switched careers from advertising, went back to university as a young mother to study a masters of art and theology, and now teaches history, business and religion, and is a regular parishioner at St Luke’s Anglican Church, Clovelly.

This past year, she successfully negotiated an amicable separation and a book deal while working from home wrangling two young children. All of which suggests she may have more insight into life’s challenges than you would expect from someone of her pedigree.

Risk and resilience are the subjects of her parenting book, although she’s the first to admit she thought most Australians would only be interested in it because of her parents, but she’s clearly touched a nerve. Next month it will be published in the United States, Chinese and Slovenian translations are in the works and she’s already working on a second book focusing on gender and consent for teens, due for delivery in June. 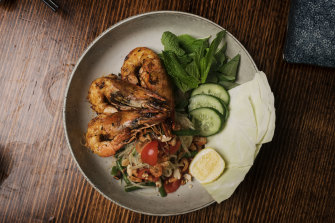 Because getting together for lunch is difficult during the school day, we meet after work for drinks and an early dinner at Van Expresso Bar, in Coogee, coincidentally the state electorate where the NSW Liberals have approached her to run for office.

It’s a hot day, and Turnbull is already installed in the airconditioning when I arrive, in a colourful Mr Zimi mojito print shift dress that calls for cocktails. We order cucumber coolers to match the mood; modern Vietnamese/French with jazz playing in the background as chef Anna Kellett’s attentive staff direct us around the menu. Turnbull begins by explaining she was at a positive psychology conference in Melbourne when she realised, “All this talk about resilience is great but where is the how-to for parents?

“A lot of kids at independent schools across Australia are the richest they will ever be when they’re at school, and their parents have worked really hard to get them there. But, do the children have the same hunger and how do you instil that hunger in the next generation children?” she asks. Speaking of hunger our first course of seafood dumplings and papaya/prawn salad arrives on cue.

Very quickly our talk turns to the culture of the Canberra bubble and the Liberal Party, which she is unafraid to criticise for its treatment of women.

“I feel so bad for Brittany Higgins,” she says. “There are a lot of cultural issues in Canberra that need to be questioned and probably the solution is getting more women involved. I think it is about calling out behaviour way earlier at the smallest actions … people join the Liberal Party when they are around 16 or 17. Often, their views, their perspectives on the world are already set. So I do think, even as parents and educators, we need to not shy away from difficult conversations.”

In her role as director of wellbeing she had invited domestic violence campaigner Jess Hill, whom she’d met via Twitter, tospeak at her school about how to identify abuse. She applauds Chanel Contos, the former Kambala student whose recent online petition calling for earlier sex education was signed by thousands of young women, including some from her former school and some from the one she teaches at now. 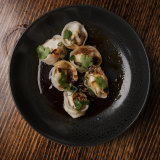 “Those girls were incredibly brave but it is so sad to think some thought they were at fault or somehow to blame [for sexual abuse]. Like they said they thought rape happens in alleyways, they didn’t realise it could be their best friend or the guy they met at a party … and the guys thinking the girl was into it is not OK.

“Traditionally the kitchen tea was the event where you would explain to a bride what happens on the wedding night and it’s almost like we need to be talking in the same way to girls and boys, way earlier, about consent.”

Turnbull is tiny: five foot flat but with a big personality to match her smile, which resembles her mother Lucy’s. Father Malcolm jokes she gets her knitting skills from his side of the family, although they skipped a generation. Turnbull’s grandmother, writer/academic Coral Lansbury, used to knit intricate Fair Isle patterns, while she dictated the scripts for the ABC dramas she wrote. Lansbury also wrote “quite racy” novels, which make for uncomfortable reading “when you know your grandmother wrote them”, Turnbull says. The writing gene is strong on both sides of her family. Both her parents have written books, and she wishes her great uncle, the writer/art critic Robert Hughes who wrote The Fatal Shore, had metwriter Bruce Pascoe; she thinks they’d have hit it off. She and her older brother Alex used to call Hughes “W.U.” (short for wicked uncle) when he lived with them for a while after his near-fatal car crash in 1999.

‘I was always sent to tell him he couldn’t have any more ice-cream because we were worried if he put on weight the rehab would be harder.’

“I was always the one who was sent upstairs to tell him he couldn’t have any more ice-cream because we were worried if he put on weight the rehab would be harder.” Her political nous too has come from her family – she was 14 when she began handing out how-to-vote leaflets in the 1999 referendum on the republic, the same year her mother was first voted onto the City of Sydney council. 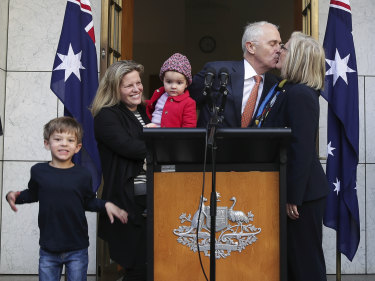 Outgoing prime minister Malcolm Turnbull with wife Lucy, daughter Daisy, and grandchildren Jack and Alice, after the party room meeting which ousted him in 2018.Credit:Alex Ellinghausen

“Dad went into politics with a great sense of civic duty and it was really a great introduction for me about how to meet and talk to people. I really loved that ‘great branch stack of 2004’ that got him elected. I learnt so much from Mum and Dad’s experiences. It was really cool to be the daughter of the Sydney lord mayor as well, though I probably didn’t appreciate that as much as I should … I think I was just a disgusting teenager at the time.”

Her first book is a guide to building independence in the first 10 years – a “giant listicle” as she calls it. It encourages children into outdoor pursuits such as climbing trees, scraping knees and a particular favourite, No.15: “Order their own babyccino.”

Clearly she knows the “yummy mummy” culture most of her readers inhabit. On the publicity circuit, everybody asked what Malcolm and Lucy were like as parents. Her stock answer is they were more free range than helicopters parents. What did risk-taking look like as a teen in the Turnbull house, I ask. 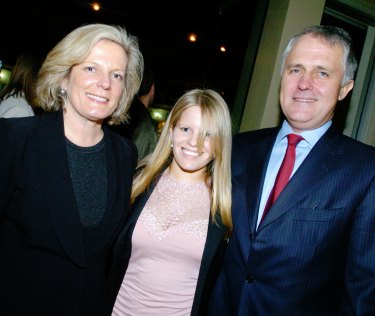 Lucy, Daisy, and Malcolm Turnbull in 2004, the ‘year of the great branch stack.’Credit:Janie Barrett

“I remember once when we were at Woolies in Double Bay and I wanted to get the cereal Just Right, and Mum said, ‘It’s got a lot of sugar in it,’ and I said, ‘You know what, I’ve never taken any drugs, or smoked or drunk to excess, I just want to have Just Right,’ and she was like, ‘Fair call.’ ” She got her sweet cereal.

Another time she got into bother at school when she asked her father, a former journalist, to take a look at a history essay she’d written, with an introduction, paragraphs making her points and a conclusion.

“He ripped it to shreds and turned it into a journalistic article, with one or two sentence paragraphs, and I just did so badly.” She’s since been able to return the “favour” by reading her father’s first draft of his book, A Bigger Picture, and gave it the “history teacher’s essay-marking treatment” before publication.

This led to a conversation about resilience with her father’s editor Arwen Summers at Hardie Grant, which became the basis for her book (which she delivered along with a crocheted gift around the same time Summers delivered her third child). It wasn’t until reading Turnbull senior’s draft that his daughter realised how depressed her dad had been when first toppled from the Liberal leadership in 2009.

“To show that depression is something he went through is a very generous act, especially for a man of his generation,” she said. It is also what made her undertake Lifeline counselling in 2019.

“Lifeline changed the way I talked to people. Early on, I used to try to be a ‘fixer’ but it taught me to do the opposite of that if I want to help someone.” 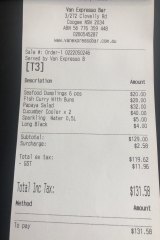 Bill for lunch with Daisy Turnbull.

We slowly savour Van’s signature John Dory curry, as she delicately talks of her split last year from her husband of 10 years, the former head of NSW RSL, explaining they are “great co-parents who share the parenting 50/50. It was a very difficult thing to go through but we both know we want to be the best possible parents we can be.” Jack Alexander (whose middle name is after her former father-in-law), 6, attends the local state primary school in Paddington and Alice Lucinda (middle name after her mother), 4, is still at daycare.

Her parents, school and church community have been great support, too. Although christened Catholic, she first went to her Anglican church at the invitation of the chaplain at “St Cath’s” where she has now worked for eight years. In listening to some lectures about Martin Luther, she found a community of like-minded critical thinkers, and families with children the same age as hers.

Although cursed with working mother guilt, she adores her children, and loves taking them to her parents’ property in Scone as often as she can. She shows me a video of daughter Alice, reaching a milestone that day, her first swim without her bubble in the backyard swimming pool. And she laughs at the memory of Jack’s first 15 minutes of fame, when he booed the journalists who had gathered to report on her father’s final press conference as leader of Australia in August 2018.

Her next book, roughly along the same lines as her first, most probably 50 Questions to Ask Your Teen, is being written the same way as the first; handwritten in dot points in snatched hours after school, then to be refined later.

As for Liberal Party preselection, she confirms she has been approached, but says she’s happy to stay teaching for now. “There is no point making any decisions at the moment.” But no one would be surprised if politics is a risk Daisy Turnbull decides to take.