Home » Lifestyle » Did you really remember that? The mirage of our memories explored

Remembering is often framed as a straightforward process. But for Martin del Amo, memories can involve flights of imagination. They draw close and fade into the distance according to the passage of a life.

The Berlin-born dancer and choreographer, who has lived in Sydney for two decades, says his perception of the past has transformed as he’s aged. This is what sparked Mirage, which shows at the Sydney Festival in January, and is his first full-length solo work in 10 years. 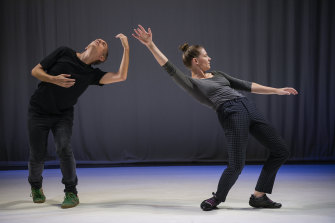 “The older we get the more experience we have and in some ways the linearity we associate with life, we don’t experience as linearity at all,” he says. “Events in my life from 20 years ago take on a [new] significance. You are surrounded by memories rather than the things you have lived through. Words carry meanings. [But] dance can play with this sort of blurring and oscillating because it is ambiguous, a more abstract form.”

Del Amo talks with a quiet intensity and punctuates his words with gestures. A sweep of the hand declares a fresh insight. He picks up his flat white and places it back on the table while considering a question.

Later, in the performance studio at Campbelltown Arts Centre, this physicality comes alive. Dressed in a black T-shirt and jeans, he arches his back and rolls his shoulders. He twists to the right, graceful and searching, orienting himself in the space around him.

A mirage, of course, is an optical phenomenon caused by atmospheric conditions. For del Amo, it’s a powerful metaphor for the line between truth and fantasy.

“You can never be sure that the things you remember actually happened,” he says. “A mirage can make you question what is real [and] memory operates the same way.”

On stage, del Amo’s co-performer, the dance artist Miranda Wheen, with whom he previously collaborated on the 2017 work Champions, furls and unfurls in tandem, as if tracing another interpretation of the same movement.

Del Amo has spent the past 10 years mostly choreographing work for other artists. Conceiving Mirage as a shared solo, he says, was about mining this experience. Two soloists rather than one, he says, can also confound a viewer’s perception.

“I wanted to involve another dancer in the making process,” grins De Amo, who revisited filmmakers from the ’50s and ’60s, including Federico Fellini and Akira Kurosawa, when bringing Mirage to life. “There are ‘A’ sections and ‘B’ sections and the next night, we swap. We will have matching haircuts – not to create clones of each other but two versions of the same.”

Del Amo started working on Mirage in 2019. But in the two years since, del Amo says, the pandemic has fractured our sense of reality. It’s also asked us to rethink our relationship with our bodies.

“It’s a very potent reminder of how our reality can disappear just like that – it’s about how we wrestle with it, how we erase it,” he says. “There is a lot of confusion about the future. He smiles. “It’s very easy for me to think of lockdown, when you’re [a body] in restricted space, as choreography.”

The past two years have felt like a lesson in waiting. Mirage will unfold to a piece of music called Piano and String Quartet by the avant-garde composer Morton Feldman, played live by pianist Sonya Lifschitz and the Enigma Quartet.

“The music doesn’t have major shifts,” says Del Amo. “The way I describe it is like a river that is constantly moving. It doesn’t work with crescendos or cuts.”

“[Sometimes] nothing is happening – [the performers] are just standing,” he says. “But this is an invitation. There is nothing that you need to do – just sit and listen to your breathing.”

The work, which will revolve around an all-white set, conjures a space that’s dreamlike and liminal, suspended between past and present.

“We are going to create a meditative space,” he says. “I hope that when you come in, you will be transported. I hope that people are immersed in movement, sound, a visual space that differs from their own world – but brings up ideas they can relate to.”

Mirage shows at Campbelltown Arts Centre as part of Sydney Festival from January 7-15, 2022.

TV, movies, Find out the next TV, streaming series and movies to add to your must-sees. Get The Watchlist delivered every Thursday.