Home » Lifestyle » Dog news: UKs LONELIEST pup is waiting for new home after more than a YEAR in kennels 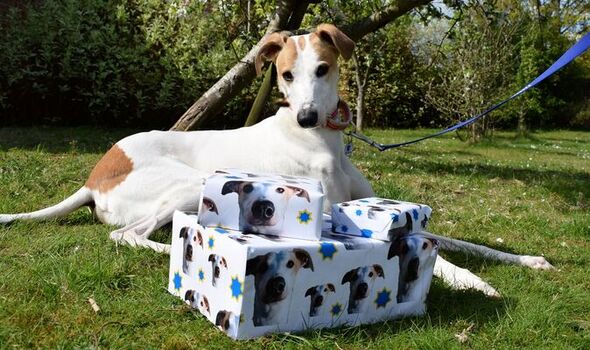 Henry, a bashful three-year-old Lurcher has lived at the Battersea Old Windsor animal rescue service for more than a year now. Staff at the Berkshire centre try their best to find him a loving family to call his own, however, adopters have sadly been ignoring him. On the one-year anniversary since he was found, staff at the animal welfare charity made sure Henry didn’t feel too glum.

They treated him to a long walk ending with a sunny picnic, complete with dog chews, and games.

As seen in the pictures, staff even gifted Henry presents wrapped in specially designed gift wrap adorned with the Lurcher’s happy face.

Staff believe Henry’s timid side may be getting in the way of him finding his perfect home as he can be a bit worried when it comes to meeting new people.

Hannah Gee, Dog Rehoming Team Leader at Battersea, Old Windsor said: “Henry came into Battersea as a stray, so we do not know much about his history, however since he has been with us, he has been very affectionate and is looking forward to finally having a home of his own.

“When Henry gets to know you his loving and scatty side shines through – he absolutely loves curling up together with his favourite people and adores a duvet.”

Henry loves food and, according to staff of the charity, he may try to help himself if the opportunity arises.

He is described as playful with toys, while he was housetrained in a foster home and travels well in the car.

During walks, he finds seeing other dogs quite exciting and can become vocal and pull towards them.

The charity advises that Henry will need the time and patience for some ongoing training inside and outside the home.

But potential adopters shouldn’t be worried, as he is very clever and quick to pick up training when food is involved.

Ms Gee continued: “Henry struggles with anxiety and is looking to find somebody who can spend and dedicate time with him until he is feeling settled.

“He’s also something of a ladies’ man although he has been building his confidence in this area whilst he’s been with us, and this is something new owners can continue to develop with ongoing support from our experts here at Battersea.”

Typical for his breed, Henry likes a good chase, so Battersea are looking for owners who may have some experience with Sighthounds and he would be happier being the only dog in the home.

People that look to adopt and think they could offer Henry a new home can visit the charity’s website [link], email [email protected] or call 01784 494 443.