Prime Minister Scott Morrison has called on the leaders of Australia’s states and territories to reconsider travel exemptions for people who are fully vaccinated against COVID-19 saying the measure would boost the number of people willing to get their jabs.

His previous call for vaccinated Australians to be exempted from interstate border bans was rejected amid criticisms they would lead to a vaccine passport. 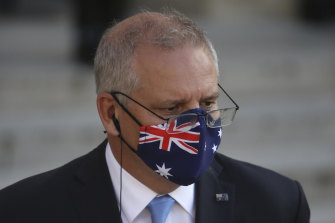 NSW Premier Gladys Berejkilian, who has kept her state’s borders largely open during the pandemic and is resisting calls for lengthy Victorian-style lockdowns to combat outbreaks, is also against the measure saying all citizens should be free to move across the country regardless of their vaccination status.

Late on Thursday Victoria said it was shutting its borders to residents of Greater Sydney, Central Coast, Shellharbour, Blue Mountains and Wollongong after recording a positive infection linked to the NSW cluster.

New Zealand has already paused its travel bubble with NSW, and South Australia, Western Australia have both closed their state to NSW.

There are just shy of 720,000 Australians currently fully vaccinated but with more than 6 million first doses administered, that figure is set to significantly rise.

The Prime Minister said rewarding those who had been jabbed by giving them greater freedom during snap restrictions and sudden border closures would encourage more people to get vaccinated.

“I know there are real reservations in Australia that, the idea entitles you to do something and doesn’t allow others to it, there is a concern about that in the community and I acknowledge that and I understand that,” he said.

“The vaccine is not compulsory and we would not make it compulsory but at the same time, if the health risk is lower for someone who has been vaccinated, and that has to be established, then that does provide those things [for] the states consider,” he said.

The Prime Minister said other countries such as South, Korea, United States and United Kingdom were rewarding the fully vaccinated with fewer restrictions.

Britain’s Prime Minister Boris Johnson said on Thursday that Europe and Britain had a “real opportunity” to open up international travel “through the double jab.”

The CDC in the US has said those who are fully vaccinated do not have to wear masks, socially distance or quarantine upon returning home from international travel, or if they come into contact with a positive case, unless required to by their local or state authority.